It seems incongruous that Ruth Brill’s dance CV includes a leading role, danced eighteen years’ ago. Although recently retired from Birmingham Royal Ballet to concentrate on her choreographic career, Brill is still a young woman and the implausibility of her dancing almost two decades ago is explained by that role being Pauline in an adaptation of Noel Streatfeild’s Ballet Shoes, choreographed by Cathy Marston, for the London Children’s Ballet.

LCB celebrated its twenty-fifth anniversary by reviving Marston’s ballet, although the choreographer is now in such global demand that she could not restage it herself. Step forward Brill to provide the neat synergy of the young girl on whom the role of Pauline was created, growing up to become the work’s revival choreographer. It resonates with the essence of Streatfeild’s own narrative.

Ballet Shoes became a classic as soon as it was published, in 1936, selling out to the extent that even the author was allowed only two copies of the first edition. This charming, unthreatening tale is based on the preposterous notion of an eccentric explorer, Gum (Samuel Larsen, 13) turning up periodically to deposit three orphaned or unwanted babies on his young niece, Sylvia (Amy West, 13) and her “Nana” (a mature perfomance by Honor Dixon, 15). Nowadays, such philanthropy would no doubt lead to his incarceration!

In due course, the three girls, known to each other as the Fossil sisters in honour of Gum’s trade, graduate from Madame Fidolia’s Academy for the Performing Arts. The eldest, Pauline, becomes a West End star, and a spoiled brat to boot, with Stella Chambaud (11), enjoying the mentoring of the role’s creator, excelling in both the petulant and theatrical aspects of her character; Posy (Annalise Wainwright-Jones, 10) dreams of becoming a great ballet dancer; while Petrova (Tilda Marriage Massey, 13) sublimates her love of engines to play second fiddle to Pauline’s career. Cast as Peaseblossom in A Midsummer Night’s Dream, Pauline throws a tantrum too many and is replaced by the understudy, Winifred (Lucie Apicella-Howard, 14). A distraught Pauline is advised by Sylvia to write a letter of apology, which wins her the role back (if only everything could be that simple).

Pauline’s subsequent performance elicits a Hollywood contract from a movie agent (a hilarious cigar-wielding cameo by Sam Willis, 14) accompanied by his glamorous assistant (Isla McDonald, 15). The great ballet dancer, Manoff, who had been performing as Oberon (excellent dancing and secure partnering by Hugh O’Sullivan, 16) agrees to coach Posy back in his homeland of Czechoslovakia; and, just in the nick of time, the errant Gum returns to take Petrova with him on his next adventure. All ends happily in this most comforting of idyllic worlds. But, then, that was 1936……

The great achievement of LCB is to mount professional productions, complete with full orchestra, without charging parents for the privilege. Founder and artistic director, Lucille Briance estimates that only 20% of the participants would be able to take part if fees were to be charged. So, hats off to the many volunteers and sponsors, including this year’s headline supporter, Big Yellow Self Storage, promoted by a range of evocative black-white-and-yellow posters dotted around the venue.

Raymond Warren’s original score for Marston’s 2001 ballet is as charming as the story, carrying instrumental leit motifs for each of the main characters (the clarinet for Pauline, oboe for Petrova, and piccolo and xylophone for the quicksilver Posy). It is a sobering thought to consider that a score of this quality was made for a children’s production and by a composer who had never written for narrative ballet before. The LCB’s 20-strong orchestra performed excellently under the baton of Philip Hesketh (the company’s musical director for 19 years). Charlie Camm’s set is capable of easy adaption to each scene and Kate Ford’s colourful costumes evoke the period.

The only generic problem with ballet for children is that the momentum is continually broken with frequent scene changes and Ballet Shoes is no different from that norm with thirteen main scenes spread over two acts, some lasting only a few minutes. It’s a necessary problem but one that nonetheless gives an uneven feel to the theatricality.

This minor difficulty is offset by hugely enthusiastic performances throughout the cast (42 girls and 11 boys, aged between 9-16, sadly excluding two unable to dance through injury). Each of the Fossil Sisters’ interpreters was well suited to their role, and while it is difficult to single out others for special mention, it is worth noting the particular talents of three: firstly, the beautiful lines and feet of Lucie Apicella-Howard, stealing her scenes as Winifred; Samuel Larsen also gave a comedic cameo as Bottom in the ballet-within-a-ballet scene for A Midsummer Night’s Dream; and Ruben Garcia (11), performing therein as Puck, brought spontaneous applause midway through his stunning series of flashing fouettés. As well as dancing ballet beyond the reasonable expectation of any 11-year-old, he can also tap dance with aplomb. Many congratulations to his teachers at South London Dance School. Ruben is joining The Royal Ballet School, next year, and I suggest that he is one to watch! Maybe one of these young dancers will be back to choreograph a further revival of Ballet Shoes, in 2038, with another cast of dancers, not yet born, nor even a twinkle in their parents’ eyes! 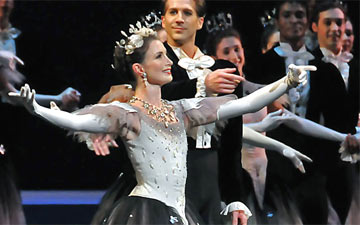 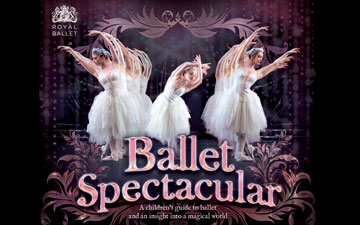