Visiting Paris for Christmas, I joined tourists and locals at the ChâteletTheatre, run by Jean-Luc Choplin (once director of Sadler’s Wells), whose policy is to introduce Parisian audiences to the pleasures of vintage American musicals. An American in Paris is due to have a run on Broadway after its try-out at the Châtelet, so most of its cast and creative team are American, with notable exceptions; Christopher Wheeldon, choreographer and metteur en scène, Bob Crowley, designer, Natasha Katz, lighting designer – and Leanne Cope of the Royal Ballet as the leading lady.

Wheeldon has long wanted to mount a musical theatre version of the 1951 film, which had Gene Kelly as the choreographer and leading man, and Leslie Caron as the heroine, Lise Dassin. Wheeldon had already choreographed the ‘rhapsodic ballet’ from the film, to George Gershwin’s symphonic music, for New York City Ballet in 2005. Indeed, the new production seems as though it’s going to be a Matthew Bourne-type ‘dancical’, setting the scene in motion with dancers going about everyday life in austere 1945 Paris. They’re obviously ballet-trained dancers, with Leanne Cope as an elusive sprite with whom demobbed GI Jerry Mulligan (Robert Fairchild from New York City Ballet) falls in love. The movement language has been established from the start as balletic.

However, there’s a narrator to help the story along: he’s a young Jewish-American composer called Adam Hochberg (played by an actor, Brandon Uranowitz), who plays for daily class at the Ballet du Châtelet. Artistic Jerry accompanies him in order to sketch the dancers, and sees Lise at her audition to join the company. By now, we’re into lots of dialogue as well as songs from the Gershwin catalogue. The book, by Craig Lucas, is clunky – not helped by miked performers speaking slowly so that surtitles in French can keep up with them.

Programme notes explain that the production takes the characters’ situations in recently liberated Paris far more seriously than the film (set in 1949) chose to do. Issues raised in the dialogue include French guilt over the Nazi occupation and the appalling treatment of Jews and homosexuals; American GIs’ war traumas; Freudian father complexes; turbulent changes in modern art and music; unrequited love – and more. Far too much for a musical set to familiar songs, whose happy or wistful lyrics have to be taken with more than a pinch of irony. When the three main male characters sing about love being enough ‘As long as I care for you and you care for me’, one of them has to add, ‘We’re not fooling ourselves, are we.’ When Lise says to Jerry: ‘Life is not like in your American movies’, his response, ‘Why not?’ is implausibly naïve.

Irony is very tricky in musicals. When is choreography meant to be crass – as in the ballet for which Lise auditioned, and which is performed at a Parisian soiree? Yet the triumphant final ballet starring Lise is supposedly by the same pretentious ballet master. Are ‘period’ jokes about homosexuals as fairies funny? Is a needy American heiress with airs about art to be mocked or pitied? Are ‘French people’ really right to insist that ballets should be cheerful celebrations instead of cerebral? There’s a big problem of tone in this production that will need to be sorted out when it goes to Broadway.

As in his narrative ballets, Wheeldon crams in too many ideas. What he does supremely well is to convey emotions beyond words in his pas de deux and solos. We learn about Lise in a charming solo that pays homage to Ashton’s Chloe and Ondine; Jerry unfurls his feelings in flying maneges and angular jazzy enchainements; their mutual attraction is revealed in romantic pas de deux that avoid Wheeldon’s usual acrobatic lifts. Here he gets the tone exactly right as Lise resists then succumbs to Jerry’s importuning. Cope is delicious as gamine Lise, singing two solo songs commendably well. She’s also a noticeably better dancer than the supporting corps. Fairchild is on another level as a triple-treat performer – good actor, fine singer and star dancer. He carries the show, as Gene Kelly did the film.

Wheeldon’s use of the 27 members of the supporting corps (many from American ballet companies) is adroit, often witty. They portray a variety of characters, including artworks such as Picasso’s harlequins, acrobats and cubist portraits. The stage comes vividly alive to Gershwin’s fascinatin’ rhythms and fidgety feet compositions. There’s even a Radio City Musical Hall hommage with tappers, ostrich feathers and top hats. Irony alert: this is the gay character’s fantasy, and he is a lousy dancer, though his disapproving father (closeted gay?) is suddenly a convert to cabaret.

Bob Crowley’s sets, their component elements wheeled around by the cast, are cleverly versatile, though could do with simplifying yet further. Starting out post-war drab, colours brighten in costumes and lighting until the big number near the end is positively eye-popping. By then, I was watching the production as an entertaining if curious ballet rather than as a would-be musical with too many false endings. Though it received rapturous applause from an audience with a lot of English-speakers, I suspect it needs radical tweaking if it’s to succeed on Broadway. At present, Wheeldon’s An American in Paris is an over-ambitious, over-long experiment that falls between genres, neither musical comedy, film tribute nor dance-theatre, with a bad book and worse jokes. And fun dancing. 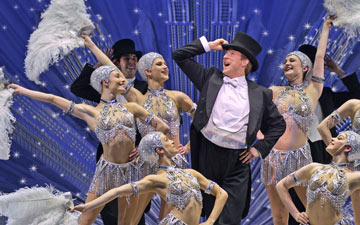 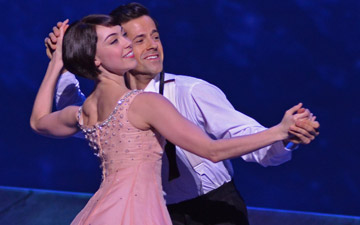 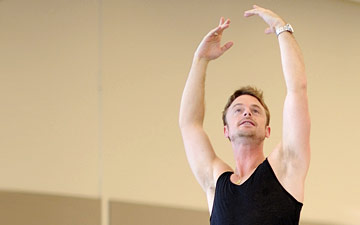