JV2
Silence, Unregistered Traces, I was Minus All
London, The Place
1 May 2015
jasminvardimon.com/productions/jv2-works/jv2-2015
www.theplace.org.uk

This show brought a new twist to the recent hot debate about the state of “oven-ready” dance professionals graduating from the “big 3” British contemporary dance schools (London, Laban and Northern), which was kicked off by a joint press release from a “big 3” of the British contemporary dance scene (Akram Khan, Lloyd Newson/DV8 and Hofesh Shechter).

Actions generally speak louder than words and here is an example of an established choreographer (Jasmin Vardimon) having taken action to provide a postgraduate training programme (leading to a Professional Development Certificate) as a means of (glass half-full definition) enhancing the all-around training received as undergraduates; or (glass half-empty definition) filling the perceived gap in robust dance performance skills that exists between the graduate capability and the needs of the companies. Either way, her programme has the same effect.

This programme is not unique. It does much the same job as, for example Transitions or EDge but both of these schemes are postgraduate performance companies based at the main contemporary dance schools (Laban and LCDS) and so neither benefit from that direct and exclusive synergy with a parent company: whereas the JV2 cohort train alongside Jasmin Vardimon Company at their studios in Ashford. There are many apprenticeship schemes but that process effectively assimilates one or two postgrads into a professional company, such as Richard Alston Dance Company or Company Chameleon. These hybrid arrangements provide direct professional experience but don’t form a cohesive postgraduate cohort as is clearly the case with the strong bonds generated amongst the 14 dancers of JV2.

This is training that comes with a price (for 2015/16, it is just under £6,000 for UK and EU applicants; and £17.2K for any from the rest of the world) but on the evidence of this triple bill, the value achieved among these young dancers is considerable. Reflecting on the statement of the “big 3”, there is such robustness, rigor and athleticism on show amongst these outstanding young performers that it would be hard to fit a cigarette paper between their strength, endurance and technique and that displayed by the younger members of any professional ensemble. They may yet lack the experience of continued personal development but that is something that can only come with the passing of the years.

What you get with the JV brand is an intense physical approach to dance and the JV2 dancers have assimilated this physicality with gusto. The absence of kneepads, while aesthetically pleasing, was a courageous decision given the amount of punishment they took; and there were plenty of bruises to show for it! Several of the dancers have a tough, martial arts or sporting demeanour and it was no surprise later to discover that platinum-blonde Sarah Thomson was a European Gold Medallist in Mixed Martial Arts, as well as being a professional surfer and a frequent medallist in ultra marathons; and another blonde, Klaudia Wittmann, had been in the German Rhythmic Gymnastics Team for five years prior to studying at London Studio Centre. There were – by the way – several girls of similar height and long blonde hair.

The three works were a mixed bag; my favourite being the opener by Mafalda Deville (a former dancer with Jasmin Vardimon Company), entitled Silence, which was effectively divided into four quarters, none of which seemed to bear any relevance to the others, either in terms of narrative or style. The opening sequence had a guy (Andre Rebelo) and a girl (Hannah Rotchell) seated listlessly on a sofa, initially in silence; Rebelo accepts his partner’s invitation to dance and they perform some steps in hold, repeating them faster. In due course, the “surprise” revelation is that the “sofa” is actually formed of the 12 other dancers arranged cleverly under a cover. Unfortunately, their inability to remain still somewhat spoiled the reveal.

The next sequence has the formidable fourteen at a rock concert (Marilyn Manson, no less) screaming and jumping like a family of Meerkats on acid. One of them (Rachel Morgan) becomes progressively detached from the others, more obsessively demented in her Marilyn fangirling; her Scottish accent begins to dominate the shouting and her isolation is complete when Rachel is lifted up to stand on hands above the others’ heads.

The spotlight then moves onto a very effective duet where a seemingly lifeless Celina Liesegang is man-handled around the stage by Ryan Brown (reminiscent of a MacMillan closing pas de deux – Manon or Romeo and Juliet), which then morphed into the performers’ uncontrollable quivering and shaking at the front of stage. This peculiarly athletic form of dementia is passed through most of the group and after several minutes’ more of dance phrasing that appears to reference loss of identity – in one way or another – the work ends with the 14 dancers lying on the floor balanced on the middle of their backs with feet and hands stuck, and shaking, in grotesque poses. This was the work that uniformly maintained interest throughout its 20 minutes, largely through three significant changes of pace, direction and music.

I’m afraid that I can’t say the same about the middle piece – Unregistered Traces by Athanasia Kanellopoulou – since I found it a struggle to retain full attention over 20 minutes. The opening moments of dust floating from the performers’ costumes in movement galvanised from the surrounding silence promised something ethereal but it didn’t evolve in that way. The choreography seemed to concentrate on breathing and finding traces of former lives by arriving at moments of stillness and a lot of time was lost in getting there. The end scene of ten performers staring out – from close quarters – into the audience for a minute or more while the lights just gradually faded to dark was predictable and uninteresting.

The final work illustrated the breadth of the educational aspect to JV2 since the choreographer, Marilena Dara was also the course leader and – despite being known to the young dancers as “Ma” – she was barely older than her students, having graduated from the same JV2 programme in 2012. Dara’s work again exploited a relentless physicality with a form of rhythmic “burpee” as a leitmotif throughout the piece – one jump forwards, one backwards, squat and repeat: Liesegang is the first to do this movement and returns to it regularly throughout the show’s 22 minutes. She told me after the show that she had counted the number of jumps at the last rehearsal and it was more than 150! 150 “burpees” in a 20 minute work-out is circuit training on an Olympic scale!

Thankfully, there is some respite in regular doses of floor-based movement and the dancers often collapse to the ground one by one and in low lighting they call out their name and a figure (it can’t be their age, since it is often 31 or 35) and sometimes a place. Dara’s choreography possesses interesting angles on one’s sense of proportion in relation to time and the constantly shifting landscape of bodies with enough innovation to merit a second viewing.

JV2 marries the physicality of Vardimon’s particular style of dance theatre with a training programme to equip these young performers with the robust rigor to battle it out for the few jobs available to professionals in contemporary dance. The 2014/15 group is split down the middle with half being from the UK and the other seven coming from elsewhere in Europe (Belgium, Cyprus, Germany, Iceland, Italy, the Netherlands and Portugal); although most have had some prior training in a British environment.

My only concern lies in the group’s lack of diversity. It seems odd to have just two men; and odder still that all 14 dancers are white Europeans. There should be a compelling reason to excuse any group (dance or otherwise) when it doesn’t resemble the society that it represents. 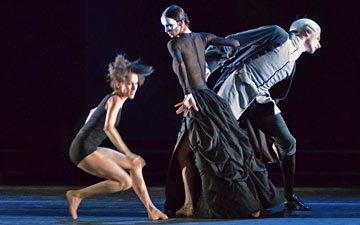 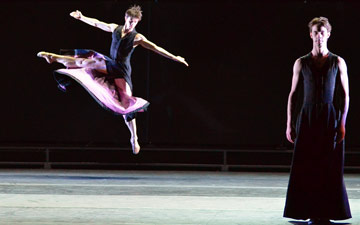 Gallery – Mikhailovsky Ballet in Multiplicity – Forms of Silence and Emptiness 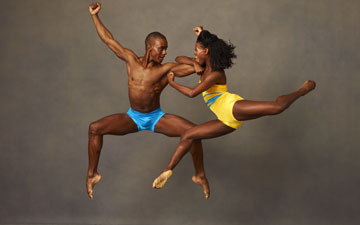 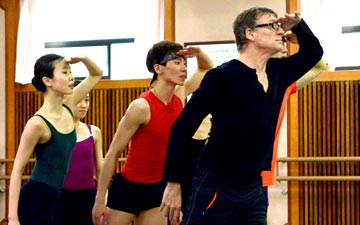