I caught a performances of the Alvin Ailey American Dance Theater when it appeared recently at the Wang Theater in Boston, courtesy of the Celebrity Series of Boston. I admit that I set out for the theater with something of a heavy heart, fearing that I would find myself thinking and writing about the company what I’ve thought and written about it for some forty years now: fantastic dancers, mediocre choreography—save, of course, for Ailey’s indubitable masterpiece “Revelations” with which the company has concluded each performance for decades now.

My first surprise was that a different piece was concluding the evening. A welcome change. The second was that this is a different company from the one I last saw two years ago: more various (it includes two white women, a white man, and an Asian man) and with lots of new dancers taking over for celebrated names of the past. My third surprise, happiest of all, was that the choreography has greatly improved.

The first piece was Another Night (2012) with choreography by Kyle Abraham to A Night in Tunisia by Dizzy Gillespie. As you might expect, it’s a fast-paced, jazzy piece that showed off the eight dancers’ speed and agility. Their revolving arms and heads, lightening-quick turns, pelvic contractions and revolving hips were accented by brightly-colored costumes. It was a piece of beautifully organized chaos. But despite its quicksilver speed and high octane energy, it created a sensuous and also a very casual feel exemplified by the dancer who strolled on stage eating from a bag of chips.

In/Side (2008) was a solo danced by the impressive Kirven James Boyd and set to Nina Simone’s Wild is the Wind. It was one of the few pieces of choreography I’ve seen by Robert Battle, the new Artistic Director of the company, and it showed a firm grasp of his idiom. Boyd began slowly scuttling across stage like a nervous insect, occasionally falling into disarticulated shapes. He rolled over the floor, he contracted, he exploded like a tornado. But the piece was marred by music that was far too loud. (I read some fifteen years ago a claim supported by scientific evidence that over a third of American college students have damaged hearing, and you would assume the percentage has grown. It seems that some of the younger people working in acoustics these days can’t even hear the volumes they’re inflicting on audiences.)

The third piece was Jiri Kylian’s celebrated Petit Mort (1991) which invariably delights audiences with its bag of Czech tricks. The dancers were awkward in the beginning as if under-rehearsed, but they soon gained control and gave a credible performance, though not as good as Boston Ballet’s last season in its all-Kylian program. Nevertheless, the humor and sophistication of the piece remained intact.

Minus 16, a work by Ohad Naharin (1999) set to music by various artists, is broken down into seven parts labeled Improv, First Cha, Echad, Metronome, Duet Mabul, Dancing, and Finale. The title Echad is followed by 19 random numbers; Dancing by 13, Finale by 20. The program note looks like Martian sudoku, one of several signs of the self-indulgence that mars this otherwise engaging piece. It began with a brilliant improvisation which started long before the audience had returned to its seats, a post-modern habit which I loathe. But once we were all settled in, the improvisation was wondrous to behold, a combination of modern and African movements performed at high speed. Then one by one 19 more dancers strolled on stage, all in grey suits, white shirts, and silver ties. Now everyone was doing an individual improvisation and the stage was a farrago of scattered energy. Once again, the music was so loud it was almost painful.

A long pretentious part followed in which our twenty dancers were seated in a semi-circle which undulated left to right like falling dominos, as in a synchronized holy roller meeting. In quick succession, the dancers threw their torsos back into extreme postures. A man stood on his chair, sat back down, and the man on the right end fell to the floor. Someone else stood up and then sat down and the man on the end fell to the floor again. Everyone removed their jackets and threw them into a pile in the center of the stage. The domino effect occurred. Another man stood on his chair and sat back down. The man on the end fell to the floor. People threw their shoes into the middle of the stage. Another domino. Next they threw their pants and shirts (one began to hope) and the end man kept falling on the floor. It was a demonstration of pure pretension and self-indulgence. If life were fair, people would be punished for that sort of thing.

But the piece was saved by the end. The twenty dancers strolled into the audience where each chose a spectator and led them back on stage. And then I wouldn’t have believed it if I hadn’t seen it. The audience members on stage, all of different sizes and shapes and races and ages, immediately fell into the spirit of the piece and began performing rumbas and sambas and shaking their asses and waving their hands and wagging their heads and leaping and running about until you thought you were witnessing a Pentecostal enactment of the Resurrection. The Ailey man who was the leader of this organized mayhem had chosen an elderly white-haired woman in a pink top and white pants who was jumping about the stage to beat the band. She ended snuggling with her partner in a slow dance and repeatedly slapping him on the ass to great applause. The whole thing wasn’t a piece of choreography so much as a choreographed event, and hands down one of the most delightful things I’ve ever seen. 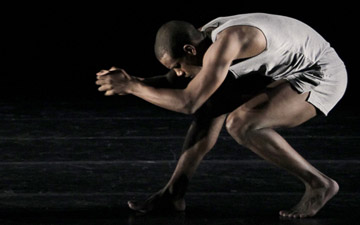