Standing attentively in a circle in the Lyric Theatre Hammersmith’s rehearsal studio, a 30-strong group of people follow the movements of one of their members. Wolfgang Stange has picked one of Amici Dance Theatre’s performers to choose a track of music for the company to start their warm-up routine. They take turns to be leader, dancing to different kinds of music. Because they’re used to improvising in front of each other, they are unselfconscious, electric with energy, some spinning in wheelchairs, others jumping in excitement, one held in the embrace of his carer.

The warm-up was in preparation for the last run-through of Amici’s new production before Stange leaves on a regular visit to Sri Lanka. The new show, 35 Amici Drive, will be performed at the Lyric 10thand 12th September, after the summer break. Celebrating Amici’s 35th anniversary, the production is its first for five years, due to the closure of the Lyric Theatre for extensive rebuilding. Wolfgang and his team hope that Amici hasn’t slipped below the radar during its absence, now that other integrated companies have sprung up in its wake.

Founded by Stange in 1980, Amici (pronounced Ameeki) was the first in Britain to combine able-bodied performers with physically and mentally disabled members. Over time, the company dropped the integrated label, becoming simply Amici Dance Theatre in 1985; critics reviewed it as they would any other performance group with professional standards. Biennial productions moved to the Lyric Hammersmith in 1999, after Amici became the theatre’s resident company, holding classes and workshops every Wednesday evening.

Stange was inspired to form a company by the example of the Expressionist dance teacher Hilde Holger, who was his mentor, as she was for many others, including Lindsay Kemp and Liz Agiss. Holger, a Viennese refugee from Nazi Germany, eventually made her home in London in 1948, teaching students of all ages in her basement studio in Camden Town. Stange was introduced to her in the late 1960s, after he had come to London from Berlin in order to study English. He was earning his living as a chef and watching ballet performances as often as he could – ‘I was obsessed by Margot Fonteyn and Rudolf Nureyev’, he says. ‘In the 1960s I could just about afford cheap seats at Covent Garden.’

When he protested to Holger that he was too old (in his twenties) to learn to dance, she told him: ’I’ve never had a dancing chef before. You’re never too old if you really want to do something. Don’t waste my time – go and change for class at once. No watching here.’ She offered him a reduced fee if he would help her son Darius, who had Down’s Syndrome, to read and write. When Wolfgang saw her teaching Darius and other Down’s youngsters to dance, he was rather horrified that she was as strict with them as she was with her non-disabled students. ‘She shouted “Move it, come on, move it’, bashing her tambourine. But I realised she knew they could try harder. She wasn’t pandering to them.’

She taught Wolfgang well enough for him to win a grant to study dance at The Place for three years. While there, he volunteered to teach at a psychiatric hospital at Tooting Bec once a week, and was then asked to work with long-stay patients with severe learning difficulties at Normansfield hospital in Teddington. Normansfield had been founded by Dr Langdon Down (who gave his name to the syndrome) in 1868. He built an elegant theatre for his actress wife within the institution – a theatre that Wolfgang used for his first production involving the patients. He broke new ground by developing the initially simple Nativity show for 21 performers into a full-scale production three years later, with live music by a colleague at The Place. He carried on his work at Normansfield until 1980, when he combined students from different groups into the company that was to become Amici.

He had been asked by Gina Levete, the founder of Shape, the arts organisation for disabled people, to conduct workshops for students of physiotherapy and occupational therapy. He added an evening class for blind and visually impaired people, then combined the two groups once they all knew the same routines. His decision to integrate them with mentally impaired people from Normansfield initially met with apprehension, but his students soon accepted Stange’s credo that ‘You’re never too disabled, too blind, too old or too proud to be able to perform.’

Their first show, I am not yet dead, was presented at a students’ theatre in Holborn with proper lighting and designs. Seona Reid, director of Shape after Gina Levete, was so impressed that she offered funds for a new, professionally supported production in regular theatres. Stange came up with the idea of a tribute to Käthe Kollwitz (1867-1945), based on the German artist’s work and diaries. When Rückblick was performed at The Place in 1982, the appreciative reception took every one by surprise, launching Amici as a company that touched audiences for its sincerity and artistic standards. Rückblick went on to The Young Vic and was then revived at Riverside Studios in 1988, when Amici became the resident company there. It went on tour to Berlin in 1995, the fiftieth anniversary of Kollwitz’s death.

There have been some 20 productions since that auspicious start, usually taking place every two years. Finding money has been a recurring problem. Although Stange’s weekly classes are funded by local education authorities, rehearsals and productions are not. Wolfgang always says ‘If you believe in something, don’t let anybody talk you out of it – you can make it happen. We made the tour to Berlin happen when everyone said it was impossible.’ But he is ashamed that, after 35 years, Amici has still had to beg for money for its anniversary production through an online campaign called SOS, Save Our Show.

35 Amici Drive is going ahead, thanks to volunteers as well as sponsors. It has a professional director, Michael Vale, also well known as a theatre designer, who has been artistic director of Amici since 2007, collaborating with Stange as choreographer. For Vale, Amici’s productions are not therapy for the disabled: ‘The performers are cast to their strengths, to maximise their abilities on stage in a good production. I’m accustomed to actors used to pretending. These performers don’t pretend. They believe in what they’re doing, they have their own ideas of who they’re being. Audiences recognise that.’

For the 35th anniversary show, they are the residents of a tenement block about to be demolished for luxury apartments and a shopping mall super-centre, to be called Eastlawn (a sly reference to Westfield). The residents are battling to stop their community from being destroyed: the tenement is their home, a safe place for people from different backgrounds and ethnicities, able-bodied or living with mental and physical handicaps. In rehearsal, I saw an ensemble scene of a choreographed fight with sticks, an encounter between an autistic boy and his frail mother, worrying about what would happen once she’s gone and a tender duet between a young girl and a solicitous boy, using a feather boa as a link between them. Everybody stopped whatever they were doing to watch the duet, struck by its extraordinary intensity.

Several of the performers have been members of Amici for many years, looking forward to creating each new production. Some have gone on to do degrees in dance therapy at Roehampton University. Others have started up their own groups. Wolfgang is confident that the pioneering work he started over thirty decades ago – without any awareness at the time of where it would lead – will carry on without him.

He has been involved in projects in Sri Lanka, the home country of his partner, the artist George Beven, since the 1980s. Stange has worked with injured and disabled soldiers, and with the insurgents they were fighting during Sri Lanka’s civil war. Together with Julian Crouch, the designer/director, he mounted workshops and productions about the country’s conflicts; after the 2005 tsunami he devised a production, Memories of a Monkey Boy, dealing with the traumatic memories of the survivors. Like his mentor, Hilde Holger, Stange has taken his faith in humanity, and in what differently-abled people can create together, to a variety of countries and contexts.

Yet his achievements haven’t been recognised with awards and honours. A modest man who loves what he does, he doesn’t crave acknowledgement for himself but for his company. Audiences applaud Amici’s productions and dance critics enthuse about the performances (Clement Crisp of the Financial Times has long been a notable supporter) but Stange’s lifetime of work deserves greater promotion. The Lyric Hammersmith doesn’t boast enough about Amici’s status as resident company: the theatre’s emphasis is on young people and Amici’s veterans don’t fit its current profile (although there is to be a Young Amici soon). It’s almost as if the presence of different-looking performers is still an embarrassment after all these years. Can it really be so? 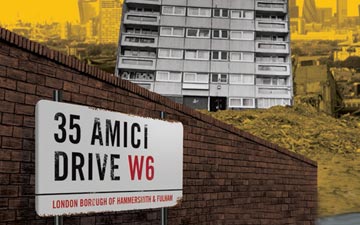 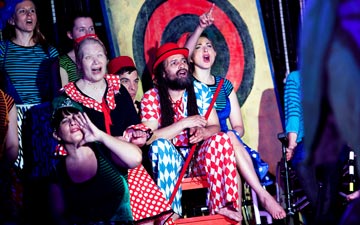