France’s Christian Rizzo’s winding path towards dance choreography has taken in forming a rock band, fashion designing and studying visual arts. D’après une histoire vraie (based on a true story) is a 2013 work he created for his company l’association fragile, inspired by his memory of seeing a brief performance of Turkish folk dancing in Istanbul. Watching a group of men “erupt on stage”, as he describes it, had a profound effect on him – this 60-minute piece is his attempt to explore why.

Two full drum kits on a platform dominate one side of a stripped back stage. One dancer emerges, removes his trainers and starts to move in complete silence. Slowly seven other barefoot dancers join him, keeping low, pushing into and up from the floor. Performers pair up, arms around each other’s shoulders; others add snatches of sombre dervish spins. An intricate pattern of movement fills the stage; torsos undulate as drummer-composers Didier Ambact and King Q4 ramp up an insidious blend of tribal and psych-rock beats.

There’s a sense of ritual and a gentle masculine camaraderie as the performers – kind of scruffy, dowdily dressed in jeans, beardy and long-haired – join in tangles of arms and traditional, Mediterranean dance lines, or support each other off axis. The two most hirsute create a tender duet where they move as one. More disturbingly, dancers break off, fall and lie stretched across the ground, as if dead (a Rizzo motif); or stand apart, isolated, as the others participate in a group dance. But they get up again, or in one segment are picked up by their comrades.

All this plays out slowly… rather too slowly, truth be told. But the redeeming climax with its accelerated drumming, transforms the scene. One by one, the eight populate the stage, now with a new jolt of joy shot through their movements; buoyant, reaching up, bouncing with energy. The shades of melancholy that had lingered (enhanced by Caty Olive’s rather tenebrous lighting) are dispersed – replaced by the sheer, rough-hewn pleasure of sharing movement and rhythm. 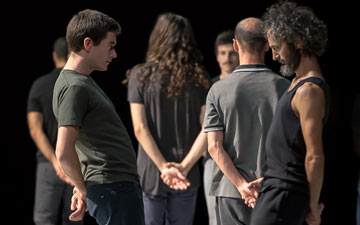 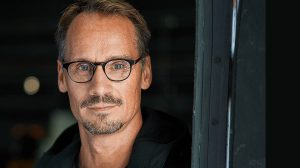