Patricia Okenwa’s first main stage Rambert commission, Hydrargyrum, was premiered in Woking earlier this month. Okenwa has been a dancer at Rambert for 11 years, but latterly her name has attached to smaller scale choreographic work within and without the company. It’s a big jump in scale and potential budget and I was interested to see what she would make of it. Also on the bill were works by Didy Veldman and Shobana Jeyasingh, works DanceTabs has reviewed before, but were new to me – so an interesting night in prospect. I also note it was an all female choreographers bill – no big thing was made of this and that’s just where we all need to get to.

Before the show I had a quick gander at the programme and what Okenwa had to say about Hydrargyrum, which is an old name for Mercury. Twice I read the first three paragraphs, and wasn’t really sure what it all meant – a confused picture for me. And in the last paragraph there was the immortal line “…explores the relationship between the individual and the group…”, now if I had a penny for every time I’d read that in an aspiring choreographer’s programme note I’d be a very rich man indeed. Reading it all again, post seeing Hydrargyrum, it makes more sense, and while I’m not sure I could discern the full sweep that the words promised, it turned out to be a stronger work then I feared from the blurb.

The work itself was in two halves. In the first an anonymous gang, all in black with their heads partly concealed as if in stiff-necked hoodies, unhappily fought one another. Musically it started with an electronic high pitch before becoming bombastic, as the ever-shifting, running fight took greater hold. Also shifting was a truly massive stage-sized mirror, suspended above the dancers and very, very, slowly rotating. It made for some odd perspectives, particularly of Paul Hoskins conducting the orchestra. This section pulses with twitchy energy and the music becomes more discordant. One dancer looks to break free of the group and there were moody looks. Then all changes in the second half as the mirror has flipped and we now see the other side which looks rather like a white trampoline, and the dancers strip down to nude-coloured underwear. The movement starts to flow – sensual, expansive and naturally kinetic. The mirror/trampoline rotates to become flat and retracts up high and a its whiteness bathes the space in a warm glow.

Hydrargyrum is an ambitious piece in concept, design-wise (Jon Bausor) and musically (Aleksandra Vrebalov) and I think you could see this a few times and find more in it each time – if those who only see it once may be perplexed or lost at times. In terms of choreography the second section, accentuating the better side of what humans can be, worked better and reminded us that Rambert have some seriously capable dancers. Although I’ve mentioned the rotating mirror/trampoline a few times, come the end I wasn’t at all sure it really added much (indeed it might have detracted from the action below) and I’m struck by the notion that Okenwa might have taken the non-trivial money it must have cost and used it to fund doing another piece somewhere. At this stage in a choreographer’s career I think it’s a numbers game – you learn to be a better choreographer by doing lots of creative work and seeing what the public think of it. Anyway, all up, Okenwa created a thoughtful piece I wouldn’t mind seeing again, and she is one to watch for sure.

Opening the night was Didy Veldman’s The 3 Dancers, based on Picasso’s cubist painting. There’s a good article by Judith Mackrell in the programme about the painting and Veldman’s response, picking up on Picasso’s unhappy emotional state at the time. Jann Parry’s review gives a good account of the background and the piece itself to which I’d add that I really, really, liked the start of the work. This immediately picks up on the painting by having 3 dancers in white permanently joined by their hands – they bob, weave and pull together and apart in various combinations, becoming knotted only to gracefully find their collective unity again. Also on stage is a second group of three dancers, in black; they shadow the darker side of relationships. It’s a very ‘dancey’ piece, if perhaps not all the ugliness of Picasso’s mindset percolated through – other than in Kimie Nakano’s dangerous shards-of-glass set that descended in parts through the work.

The evening closed out with Shobana Jeyasingh’s Terra Incognita – a meaty piece of dance inspired by journeys and exploration. In Gabriel Prokofiev it has the strongest music of the night and in Jean-Marc Puissant the best costumes/design – earthy unisex affairs of wrap skirts/kilts and singlets. Graham Watts reviewed the premiere of Terra Incognita and this was the most consistently satisfying piece of the night. It wowed with its emphatic movement rather than needing a set – Jeyasingh does wonderful things with arms and gestures particularly. It’s a fast-paced journey, just the right duration, and sends you out satisfied… and ready for your own more modest journey home. 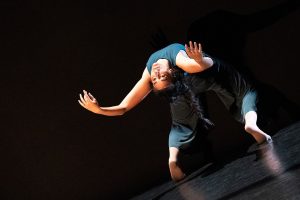 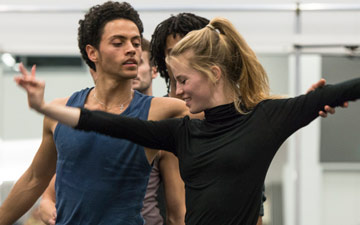 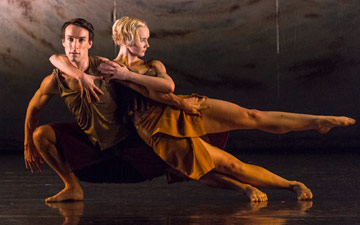 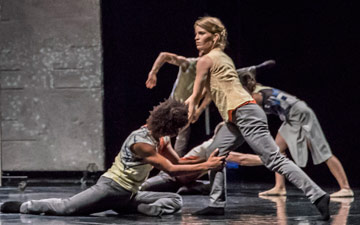