Akram Khan’s UK premiere of Outwitting the Devil is an exasperating puzzle. Opaque hints of mythological narrative offer challenges to the viewer; but it also contains some beautiful, sculptural moments and gorgeously fluent, liquid moments. The cast of six are exemplary, hardly ever off the stage and working hard for the 80-minute duration. Striking stage images and standout performances convey a bleak view of humanity but the work as a whole doesn’t cohere and remains uninvolving, almost wilfully difficult to digest. You would need to prepare as much as possible on the source material to get the best out of it.

Khan is working with his usual trusted collaborators, including dramaturg Ruth Little, composer Vincenzo Lamagna, and costume designer Kimie Nakano. It’s a long list with no less than five different rehearsal directors credited. Perhaps this reflects time to rethink and rework after Outwitting the Devil was first produced in Germany in 2019 pre pandemic.

The work is based on the ancient middle eastern epic of Gilgamesh, which may be less than well known to current viewers. Sadler’s tells us that the hero Gilgamesh cuts down a sacred grove of trees, killing its guardian, and is punished by the gods for his misdeeds, by the killing of his friend Enkidu. There’s not much further help in the programme. We don’t see any trees, though we hear the sound of one falling. The stage is littered with what may be wooden blocks, just about visible in the dim light. The lighting designer is Aideen Malone and it’s a very dark production in all senses of the word.

It’s a slow and very dim start, figures just glimpsed in the gloom before frequent blackouts. There is a voiceover in French, speaking of trees. Subtitles were shown at various points around the auditorium. Some phrases continue later but, annoyingly, without subtitles. Maybe this uncredited voice belongs to the dancer François Testory, an older man with a fine head of grey hair. I decided to view him as the older Gilgamesh, looking back on his youthful encounters and mistakes as enacted by others.

There are five further cast members, three men and two women. The men (Luke Jessop, Jasper Narvaez, James Vu An Pham) are bare chested. One of the women, Mythili Prakash, has a bright saffron yellow outfit more typical of a classical Indian dancer, and it provides the only flash of colour on stage. Epida Skourou completes the cast in a more western outfit. The performers are varied in their background and training. Prakash is classically trained in Bharatanatyam, and the vocabulary for her throughout reflects this: rather than fusing Indian classical dance with contemporary movement, Khan here seems to present the forms more side by side in different bodies (though those expressive kathak rolling wrists figure in everyone).

What we might be seeing is the muscular young Gilgamesh character encounter the “wild man” Enkidu, catching him by the ankle. There’s remarkable, ingenious, entangled male duet that ensues, flailing and writhing. The dancers are supple, fluid creatures, corkscrewing to the floor only to spring up again and curve away, coiling and uncoiling. There are further confrontations, the work is suffused with anger and violence. The old man watches as the other male dancers fight. Two are brutally and lengthily despatched in graphic and vivid struggles. Somehow this ought to be more shocking and upsetting than it felt at the time. It is performed with tremendous skill, but its bleak intensity is impressive rather than involving. You admire the skill without being touched by it.

One of the dead seems to be roused as if by an electric current. None of this is at all easy to follow. The woman in yellow is like an angry goddess, confrontational and minatory. The older man lies down on a platform. Perhaps he is ready to die, but this remains opaque. The voiceover and subtitles return, describing the felling of the sacred trees with great sadness, as if they were human. But it is rage, rather than grief and regret, that is actually visible on the stage.

Live music has usually been an important part in the appeal of Khan’s works, but here the score from Lamagna is recorded. There are warnings in the foyer that it has some very loud moments and that earplugs are available on request. The crushing visceral force of the music supports the idea of epic forces at work, but too fiercely at times. Huge peaks in volume make the floor, your seat and your ribcage vibrate. I confess to covering my ears just for a minute or two.

Sadler’s is presenting Outwitting the Devil as part of a group of performances Carnival of Shadows by the Akram Khan company. It’s twenty-one years since it was founded and has given us some thrilling and inventive productions through the years blending contemporary dance with Khan’s kathak roots. Khan is now winding up his career as a dancer with final appearances in his solo Xenos. Now he must realise his vision through other people’s bodies. His own startling virtuosity and personal charisma has always been able to deliver results even where the narrative might be less than clear or familiar (in Until The Lions for example). Here his dancers serve him with exceptional brilliance, but the setting in which they exercise it is a flawed one. 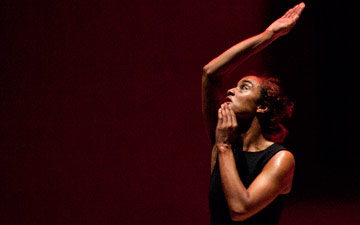