The return of Akram Khan’s Until the Lions to the Roundhouse, where  it was created two years ago, marks the end of a world tour and of Khan’s career as a principal dancer in his own productions. He started performing at the age of 13 in Peter Brook’s epic production of the Mahabharata. Coming full circle, he created Until the Lions from a tale of minor characters in the Sanskrit saga, reimagined by the poet and writer Karthika Nair.

The dance work’s title is taken from her book of verse, quoting an African proverb: ‘Until the lions have their own historians, the history of the hunt will always glorify the hunter.’ Women are the lions in this context – or rather one woman in two incarnations: Amba and her avenger, Shikhandi. The hunter who becomes their prey is Bheeshma, a warrior prince.

You can only know this by reading the (free) synopsis. Amazing how many spectators don’t bother, assuming that dance is a universal language telling simple tales. Amazing, too, that a dramaturg, Ruth Little, hasn’t ensured that the narrative context is more clearly explained. Two gnomic voice-overs by actress Kathryn Hunter are both inadequate and pretentious.

Because I saw Until the Lions at the start of its journey, I recalled that its structure is cyclical, beginning with a premonition of the end. The first figure on the performance area is that of Shikhandi, Joy Alpuerto Ritter. She is a kind of demon, part human, part animal, sexually ambiguous. She prowls and scurries on all fours around the perimeter of the sawn-off bole of a vast tree, claiming her territory. The cross-section of rings tells of the tree’s (the world’s) great age, with fissures revealing its frangibility. The evocative design is by Tim Yip, of Crouching Tiger, Hidden Dragon fame.

Shikhandi picks up a model of a man’s head (Khan’s) and impales it on a bamboo pole. To the blare of a horn, four musicians surround the tree trunk stage, chanting the name Bheeshma. This does not bode well for Khan, who circles the stage with a young woman over his shoulder, her long black hair cascading down his back. She is Amba, Ching-Ying Chien, whom Bheeshma had abducted from her betrothal ceremony, for rather complicated reasons.

He intends her as a bride, not for himself, since he has taken a vow of celibacy, but for his half-brother. She loves another, who spurns her because she has been abducted. Since she needs a husband, she tries to seduce Bheeshma, who must resist her. This accounts for her righteous anger and desire for revenge, which unbalances the universe. Without this information, it is impossible to understand the motives and cosmic passions of the three characters from the Mahabharata. Their movement language, a combination of Kathak, martial arts and contemporary dance, expresses extreme degrees of fury without identifying the cause (unless the singers’ lyrics are intelligible to some ears).

Although Amba starts out girlish and innocent, her voice sung by Sohini Alam, Chien’s skips are soon replaced by stamps. She and Ritter’s Shikhandi besiege Khan’s small, neutral figure until he asserts himself with a flurry of Kathak spins. It is already clear that powerful Shikhandi will be Bheeshma’s nemesis before she slinks away, leaving him alone with Amba.

Their pas de deux is both touching and revealing. Chien is vulnerable, trying to seduce Khan, who masks his face with his hand and pushes her away. Frustrated, she flings himself around his waist, clinging on with legs gripped behind his back (a familiar trope from Khan’s choreography with Sylvie Guillem). Amba is asking for consummation, defined as ‘justice’ in the synopsis. Rejected, she goes into a full-on nervous and physical breakdown, encased in a cage of light. Lighting designs, as choreographed as the rest of the performance, are by the invaluable Michael Hulls.

Like Rumpelstiltskin, Chien’s Amba  attempts to pull herself apart, clutching a leg in both hands, convulsing and contorting her slender body. Chien is truly remarkable, transforming herself from child would-be-bride to avenging Fury. She is joined by Ritter’s Shikhandi, both synthesising their moves until they seem ghostly clones. Shikhandi takes over, apparently now reincarnated as a male warrior. It’s her turn to go berserk in the centre as Amba walks desolately around the tree trunk that has split along the fissures into different levels.

Impressive though Ritter is as a warrior in training, gripping a bamboo pole between her teeth, her ferocious moves are reminiscent of her earlier appearances. We already know she’s demonic, so she doesn’t need to keep proving how angry and athletic she is. By now, Khan’s role as the villain of the story has been diminished: nobody is concerned about his inevitable fate, as the story comes round again to a final act of vengeance. Bheeshma has one last battle with his two-pronged enemy, fighting both off with spears or arrows.

A reprise of his first encounters with innocent Amba reveals his recognition that she and Shikhandi are the woman he wronged. He accepts the plunge of Amba’s arrow through his body, while Shikhandi raises his impaled head on high. The musicians fling bamboo poles onto the tree trunk, which descends as though into a fiery pit. It is the end of the war between the sexes – or perhaps the cataclysmic end of the world.

Khan has captured the legendary power of the Mahabaratha, compelling audiences to be gripped by one of its confrontations between mythical beings who are all too human. He has taken the almost minor role of the man who wronged a woman for what he considered the right reasons – until he was violently disabused. The two women, relentless in their rage, dominate this version of the tale. In spite of Khan’s contention in a programme note that the story reflects the present condition of our species, he is forcing a moral into a 3,000 -year-old epic account of an amoral universe. As an almost abstract dance work, however, Until the Lions is outstanding, a spectacular collaboration between dancers, musicians, designers and technicians. 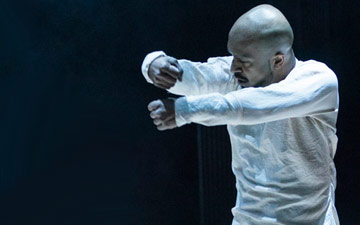 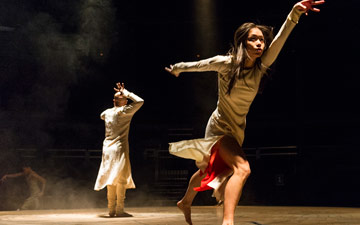 Gallery – Akram Khan Company in Until the Lions