Michelle Dorrance is an extraordinary tapper, but what stands out most about her company isn’t her skill, or the skill of her dancers, but rather the funky individuality they all share. She doesn’t seem to have a “type” – the people in her company are all incredibly different, even slightly eccentric. That goes for Dorrance, too. Sometimes, as she dances, she seems to dissolve into an assemblage of knees and elbows, all flying around. Meanwhile, below, her feet create jagged, playful, rowdy rhythms.

Her shows are like family gatherings; everyone takes on multiple roles, everyone has a chance to shine, and everyone seems to get along. Size and shape don’t really matter, and race is a footnote. In her latest show, “ETM: Double Down,” created in collaboration with Nicholas Van Young, there’s even a non-tapper, or rather, a hip-hop dancer (Ephrat “Bounce” Asherie) who dabbles in tap. When she dances, the rhythms are expressed in twists and bends and fluid, buoyant footwork. She fits right in. Several of the dancers (including Dorrance) play drums. Everybody does body percussion and helps to move around the platforms on which they dance. There’s very little competitiveness or did-you-see-what-I-just-did bravura. This is replaced, at times, by a kind of elation.

“ETM: Double Down” is an exploration of the ways technology and electronics can be used to extend the range of tap sounds. (ETM stands for “electronic tap music.”) It sounds like a gimmick, but in fact, the results are both absorbing and playful. The show overflows with ideas, and moves along at a brisk pace. Only at the beginning of the second act is there some repetition; the vocalist Aaron Marcellus creates melodic loops with his voice and layers them one upon the other. The effect is dazzling the first time around but becomes less so when he repeats it two more times.

Nicholas Van Young, a tapper in Dorrance’s company who is also an electronics expert, has devised countless ways to alter, play back, and multiply sounds. His miked platforms allow the dancers to sound out pitched percussion with their feet. There is a thrilling moment toward the end when all the dancers line up and begin to dance together, creating a cacophonous and joyful symphony. Each has his style and look: Caleb Teicher is sly and debonair; Young is big and tall but surprisingly light of foot; Elizabeth Burke is simultaneously goofy and fierce.

Dorrance Dance doesn’t specialize in military-style synchronized ensemble work. I’ve heard tighter ensemble dancing. But this has its advantages, too: the ensembles have a vitality born of individuality. There is no rote dancing. You look forward to the dancers’ solos; you know they will have something to say. Warren Craft, a tall, bald, lanky young man who looks like he might have wandered in from a performance by the Blue Man Group, is one of the strangest tappers you’ll ever see. His long body buckles, staggers, and folds; often he ends up sprawled out on the floor, tapping with his knees, elbows, and fingers. Leonardo Sandoval is his opposite: laid-back and affable, and marked by a kind of grace. Byron Tittle is the most polished all-around dancer of the crew, the one with the loveliest port de bras and the cleanest turns.

The evening is constructed as a sequence of numbers, divided by blackouts. Each has a central idea. In the first, the dancers introduce the pitched tapping. There’s a dance with chains, and one featuring a lot of sliding and scraping. Later, Gregory Richardson, on electric guitar and bass, creates his own musical conversation out of overlapping melodies. In one section, a tapped three-note figure becomes the background for some wildfire, contrapuntal tapping by Michelle Dorrance. The intensity ebbs and flows, but Dorrance doesn’t bombard the audience. She is a master of nuance.

In fact, one of the great things about the show, and about Dorrance’s tap style in general, is that it doesn’t rely on deafening loudness or pushy bravura effects like a lot of tap. She uses a lot of pianissimo and emphasizes dynamic contrast. That way, tap becomes, truly, a thrilling form of chamber music. 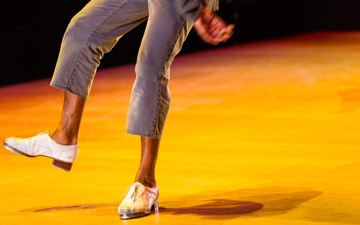 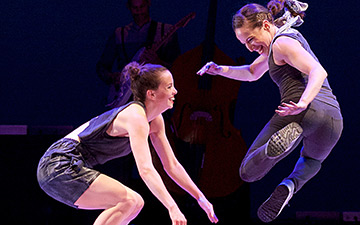 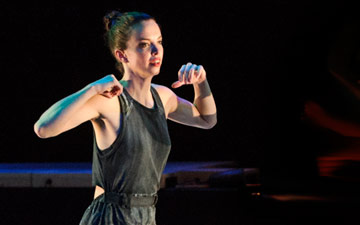 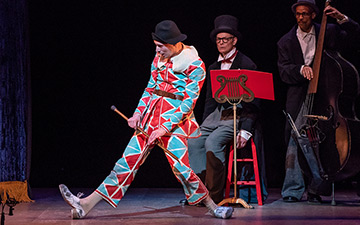 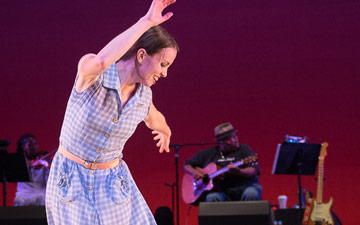