Gala performances can always be a little rocky. Dancers fly in from far flung places and perform some of ballet’s most virtuosic excerpts – many only performed frequently at galas. Unlike 2015’s Youth American Grand Prix Gala, which was held at the Koch Theater, 2016’s competition was at the compact Brooklyn Academy of Music and this may have had an effect on performances.

Hosted by Angel Corella and Irina Dvorovenko (far preferred to last year’s robotic David Hallberg), the 2016 YAGP Gala was an emotional one: Shelley King, YAGP’s Director of Operations for over 10 years, passed away in 2015 and YAGP’s 2016 activities were dedicated to her.

Like all galas, this was quite a mixed bag. Over 200 students trooped on and offstage in a veritable tornado of activity before the veteran YAGP dancers stepped out for the showstopping stuff. Unfortunately nearly everyone slipped or had wayward steps. Whether or not it was the BAM stage or just the nature of a gala itself is difficult to say but more than one dancer was dangerously unsteady on Thursday night.

A particular highlight was a bright, sunny rendition of Balanchine’s Tarantella from Dutch National Ballet’s Michaela DePrince. Performing with a warmth and wit that was elsewhere largely lacking on Thursday night, DePrince didn’t miss a beat of the tambourine, and mastered the tricky footwork with an efficient economy of movement. Her partner, Edo Wijnen, was all smiles and enthusiasm but his musicality didn’t match hers. DePrince’s personal story – orphaned at a very early age in war-torn Sierra Leone and raised in America by adoptive parents – is astonishing and in danger of overshadowing her genuine talent, exemplified by her stage presence and solid, confident technique.

Another standout was Stuttgart Ballet’s Daniel Camargo. Performing first in Firebreather by Katarzyna Kozielska and later partnering ABT’s Sarah Lane in Diana and Acteon, Camargo boasts a chiseled, lithe physique. Firebreather is somewhat given away by its title as over the top. Several spotlights light a dark stage and Camargo writhes and worms his way across the spotlights in endless combinations of sinewy acrobatics to Ludovico Einaudi’s instrumental score (watered down Philip Glass crossed with hip-hop beats). Not unlike figure skating, competition choreography is rife with histrionic moodiness, but one had hoped this would be limited to student rather than the adult performances. Firebreather shows off Camargo’s incredible physicality but nothing more.

The male choreography for Diana and Acteon pas de deux is often performed with wild variation across dancers, and Camargo really let it rip on Thursday night. It’s impossible to know exactly what the leap and tour was in his coda, but he was a mile high in the air, and spinning on a 45 degree axis. It looked as dangerous as breathing fire, and while you don’t go to the ballet to see an exhausting string of circus-like feats, a little va va voom now and then is quite welcome. It doesn’t hurt that Camargo – in visage and physique – looks almost too like a classical sculpture.

Paris Opera Ballet, represented by Hannah O’Neill and Hugo Marchand, were a little wobbly but gave a pleasant interpretation of the pas de deux from La Esmeralda (ever popular on the competition circuit, a student performed the female variation before intermission). The variation is more difficult than many presume, particularly with musical timing, and even O’Neill missed a few beats of the tambourine, but on the whole the pair offered pitch perfect examples of POB style: poised, assured, lean and purely classical.

A little later in the program, the Russians provided their version of French style in the pas de deux from Pierre Lacotte’s Marco Spada, performed by Ekaterina Krysanova and Artem Ovcharenko. Wearing powdered wigs and 18th century period costumes, Krysanova and Ovcharenko both looked extremely polished, well-rehearsed and quite at home performing in front of a photographic backdrop of Versailles’ Hall of Mirrors. Ovcharenko’s flawless brisees make one wish we saw them more often. Marco Spada echoes Sleeping Beauty’s wedding pas de deux with the man and woman dancing in tandem, which is not only becoming when done well but adds a certain vivacity and joy to the dance.

There were a few program changes but a welcome addition was the appearance of Daniel Ulbricht in a solo, Piazzolla Tango choreographed by Servy Gallardo. The New York City Ballet star is a compact powerhouse, not very tall and built with strong muscles, and his stocky figure looks light as a feather in a series of buoyant leaps (he sounds light as a feather too, his landings are silent). Ulbricht is springy, always ready to bounce, but not nervy. Tango is all relaxed, slouched ease performed with hands in pockets, swivels and sways. Ulbricht often gets tumbling roles (like the jester in Romeo and Juliet) and Tango is no different, featuring a spectacular grand jete which – after a moment of breathtaking suspension – curls into a somersault. It is a short, showy piece, and a magnificent vehicle for Ulbricht’s unique talents.

Unfortunately the programming had no shortage of overwrought material. Invocation by Josie Walsh and starring ABT’s Stella Abrera, featured the prima ballerina in a black PVC tutu and an entourage of similarly bondage-clad moving men classified as “freestyle artists” on the program. She was held up over, and entwined around, a black metal ballet barre, looking like something created for So You Think You Can Dance. Starring City Ballet’s Amar Ramasar and Rebecca King of the Finnish National Ballet, Blushing was a meandering pas de deux choreographed by Peter Quanz. David Middendorp’s Blue Shadow was set to Radiohead’s haunting “Street Spirit (Fade Out).” Much like the band’s iconic music video, Blue Shadow features an alternate world in which gravity is an inconsistent thing. A screen behind the dancers shows their shadow selves, often replicating the movement or lifting off, the shadow suspended in a zero gravity fashion. Sadly the brief piece comes off as overproduced, incomplete and compared to the song and its video–rather unoriginal. 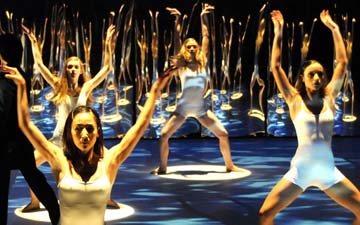 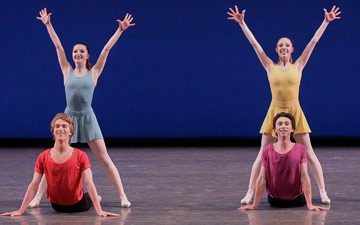