This was an unusual and magical event. That’s how I started last year’s review and it still holds very true. Unusual because one is so close to the dancers, closer than in any other space I know, and there is such a visceral thrill in seeing dance-honed skin and bone do its thing. And magical because Dulwich Picture Gallery is a magical space in itself but also magical because of the strange perspectives on moving bodies, the flare and shadows from lights, the close swish of costumes and hair and also live music created yards away and rattling the air you breathe. You don’t actually have to understand a thing about the motivation of the piece and what it’s saying – just thoroughly enjoy being inside such a different and dynamic dance world.

Having done well in Dulwich last year, Dane Hurst has returned with more dancers and a tweaked approach that retains the earlier spontaneity while allowing for a more focused approach on one piece of dance. Exodus is in 2 parts, separated by an interval, and is Hurst’s response to Winifred Knights’ painting The Deluge – the centre piece in the gallery’s Knights exhibition. It’s a surprising biblical work that rather quietly, almost dispassionately, shows a community fleeing for its life away from a flood. Hurst’s response picks up on the fleeing and terror but, in his programme note, relates it to the fleeing from war/persecution and the asylum-seeking that we see today. The soundtrack is a mix of Kronos Quartet (from their album “Floodplain“) and live drum/percussion from Nao Masuda, located in the centre of the building and at the centre of the action. It all has a Balkan and Middle Eastern tone, often sombre, but also full of suspense and cataclysmic flurries of terror.

In the first half of the show (called “Purgatory“) the dancers (15 in total) enter in shifts and underwear, their clothes in neat piles ranged down the centre of the two long Dulwich wings. There are the intimacies of life but it’s subdued, almost as if they are in a dream, and the costumes look water-stained. After dressing, there are many piles of clothes without owners and some in the audience are handed a pile, to look after for a while and perhaps ponder who the owner was and what befell them. As an audience we are all standing but we can follow the dancers as they go into some of the smaller galleries and relive horrors, or attempt to pick up the pieces of life, amid scattered remnants of wood and belongings. We are a sea of humanity, sloshing around the building, trying to make sense of what’s happening and each do the best for ourselves.

The movement is often slow and deliberate, laden with emotion and collectively helping of each other. Sometimes you are looking down on a writhing body, other times coolly engaging long eye contact, if the dancers’ eyes are rather glazed with the experiences they have witnessed. It’s a cracking group of dancers, all of whom can act with passion. The first part ends with a duet, in the centre of the building and which I couldn’t fully see. Occasional flashes of Seren Williams and Robert Bridger showed a wealth of emotion and I think at some other performances Dane Hurst will dance with Serene – she’s a terrific mover I remember from the this year’s Ballet Central tour, and going to be working with Matthew Bourne’s New Adventures company. Last year Dane Hurst was central to the dancing and although I would love to have seen him perform this year, Exodus is a different beast and much more about the collective experience.

After the interval we came back to find seats on both sides of the long gallery wings. A good move to be able to sit for part of the performance and the dancers remain as close as ever. Indeed at times when they hurtle towards you en masse you really do pause for breath and become part of the tumult. At other times the dancers pair off, the section being called “Promised Land?“. It’s full of upsets and staccato movement as well, though at the end there are signs that the refugees and ourselves, representing the settled community they have joined, are starting to bond.

At about an hour and 40 minutes all up, Exodus is a pleasing length. It’s a show not so much about the choreography as the place and the physical dazzle of dancers – I walk out on such a high. If Dulwich have any sense they will get Hurst back again next year – and hopefully far more will see it and be seduced by the richness of dance and dancers moving with passion and meaning so close to. 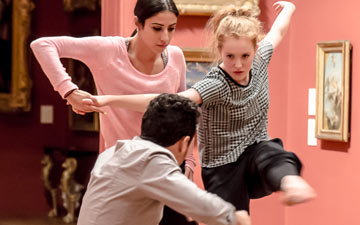 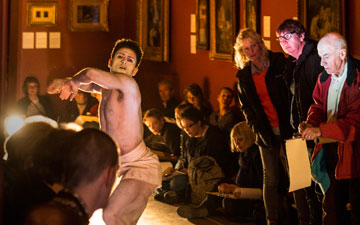 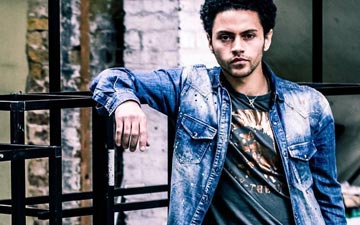 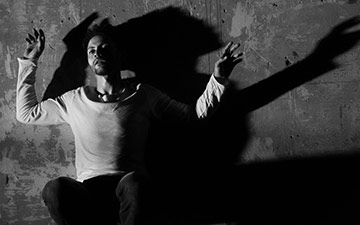