We are close to the same age, Aditi Mangaldas and I; a coincidence worth reflecting upon for reasons of envy and mortality. Envy because I wish I could move my body in the ways that she still can, half as well would be amazing; and thoughts of mortality because this work is essentially about the effect of age on the human condition.

Mangaldas is in her mid-50s but appears many years’ younger. A traditional Kathak dancer and choreographer who was a principal dancer in the company of Birju Maharaj, descended from a legendary Kathak dynasty, Mangaldas now heads up her own Foundation [The Drishtikon Dance Foundation], which has a mission to preserve the classical traditions of Kathak by creating an innovative and imaginative future for the art. Her dance company sits within the Foundation and applies its principles.

This ideal of taking the traditional forms of Kathak and placing the music and movement within a contemporary context gives Inter_rupted its rationale. It is, in fact, an uninterrupted performance of 75 minutes, sub-divided into eight sequences. Some are undiluted in their classicism; others are far removed from my rudimentary understanding of Kathak.

Setting the scene for the theme of human vulnerability, the work opens with a long scene in which a male dancer shivers with increasing convulsions. In other sequences, dancers crawl across the space (enclosed within a box, painted with hieroglyphic and apparently ancient imagery) and Mangaldas lies spread-eagled, centre stage. In another painfully slow sequence, towards the close, she joins together with another dancer, sitting on stage, with the feet of the performer behind her, stretched around Mangaldas’s back and resting on the floor between her legs; more visually enticing was the fact that the hair of the performer behind became Mangaldas’s hair. It was as if the body of the younger dancer was somehow being absorbed into the older woman. Punctuated throughout the work were small sequences in which the seven dancers tried to complete a movement, swinging their bodies above the waist, but, in the most obvious allusion to the work’s title, stopping as if an invisible force was holding them back.

Perhaps it is deliberately counter-intuitive but the sections that I enjoyed the most were when the ensemble danced with a purer Kathak style, stamping out the rhythms with their bare feet, spinning in relentless fast cycles, with the non-supported leg flashing around, like ballet fouettés. Some of the more modern sections were beautifully and sentimentally observed but others became too pedestrian, allowing yet another skirmish in that age-old battle in the mind of a dance spectator; thoughts vacillating between attention and distraction.

The difference was made, not only in the sentiment of the choreography, but also in lighting and music. Fabiana Piccioli made further claim to be in the Champions’ League of lighting designers with a versatile set that played on shadow and silhouette, emphasising even further the elements of disintegration and uncertainty. Outlines of a human form, without any detail, appeared on the backcloth, as if Antony Gormley statues had been positioned on the other side. The music was a mix of recorded and traditional, played live onstage by Mohit and Ashish Gangani; Mohit’s percussive excellence on the tabla was outstanding in its virtuosity.

For the main part, this is a show to be watched in awed silence, wallowing in a calming flow of gentle imagery, uplifted from time-to-time by explosive rhythms. Occasionally, I felt a lack of impetus but Mangaldas is conceptualising a moment in life that ‘we might strive to hold onto’ and such reflective moments generally lack momentum.

The deteriorating reliability of our bodies is the ongoing theme of Inter_rupted, coupled perhaps with the juxtaposition of a disintegrating body and an active mind. Mangaldas convinced us of her own achievement in holding onto the capability to dance beautifully at an age when most of us have difficulty walking up the stairs. She has also succeeded in giving Kathak a fascinating modern edge and – at the same time – providing much food for thought. 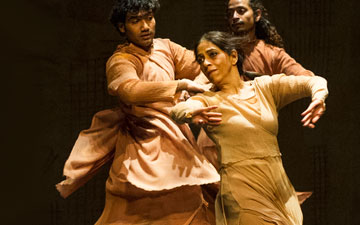