Yolande Yorke-Edgell calls her company’s latest programme Rewind Forward because its new works are inspired by choreographers she reveres – Robert Cohan and Kenneth MacMillan, whose creations are part of the mixed bill. She previewed elements of the programme in the Clore Studio in March this year, since when performances have grown in assurance.

MacMillan’s Sea of Troubles has developed into a highly theatrical piece, a revenger’s tragedy in nine brief scenes. It was created in 1988 for Dance Advance, the group of six former Sadler’s Wells Royal Ballet members who toured to small venues. This revival has been reconstructed by Jane Elliott, who notated the 1988 production and collaborated on the Scottish Ballet one four years later. Susie Crow, one of the founders of Dance Advance, has coached the Yorke Dance Project performers for their interchangeable roles as different characters in MacMillan’s compressed account of Shakespeare’s Hamlet.

The device of multiple performers of a single role was challenging at the time (and still is) and has since been used by Matthew Bourne (for Play Without Words and Deadly Serious). In Sea of Troubles, Hamlet, haunted by his father’s ghost, confronts and confuses his mother Gertrude with Ophelia, his father with Claudius, the usurper of the throne. Hamlet is guilty of murdering Ophelia’s father, Polonius, even as his own father was murdered by Claudius. The characters are designated through simple props: a transparent shroud for the ghost, crowns for Claudius and Gertrude, a chaplet of flowers for Ophelia, a blood-stained royal cloak. The only scenery is a tapestry hanging – a golden arras.

MacMillan used four short pieces by Webern for violin and piano to establish a narrative structure. The Ghost whispers in supine Hamlet’s ear as Claudius seizes the crown; Gertrude helps him on with the crimson cloak. Ophelia is manipulated like a puppet, her madness and death by drowning already foretold. Then the music (recorded) changes to Martinu’s studies for cello and piano as Hamlet is repelled by his mother’s relationship with Claudius and begins to mistrust Ophelia’s motives. He buries his head in a book – the play script for the charade to unmask Claudius as a regicide?

Even if you know Shakespeare’s play, Hamlet’s hallucinations in the ballet become more and more confusing as the characters and the time-span are confounded. I’d identified Kieran Stonely as Hamlet, Edd Mitton as the Ghost and Benjamin Warbis as Claudius until they swapped over. Then a third woman (Daisy West) took over from Amy Thake as Gertrude and Freya Jeffs as Ophelia (or so I think). All six link arms, bow and sway in a repeated sequence before slumping to the ground in the messy massacre of the almost last scene of the play. The performers’ commitment was compelling even though I’d lost the plot. They knew who they were, maintaining their interwoven relationships to the last notes of the music, which sounded as though written to support the action. It’s a formidable revival.

A choreographer who has developed his or her own expressive language is trustworthy because they have something they need to say. I hope that’s true of Charlotte Edmonds, making her reputation as an obviously gifted dance-maker. Her trio entitled Self, commissioned last year after a Cohan Collective choreographic residency, is apparently inspired by MacMillan’s Manon. Instead of focusing on the fickle heroine, Edmonds features Des Grieux (Stoneley) torn between his lustful love for Manon (Amy Thake) and his religious vocation (Freya Jeffs). Commissioned music is by Donna McKevitt.

Although Edmonds may have gone back to the original novel by the Abbé Prevost, a man’s tussle between madonna and whore is something of a cliché, especially condensed into a short work. So is choreography with agonised arms, inward curves and flexed feet. Edmonds is still finding her voice as a contemporary ballet choreographer, so perhaps she will have got this overwrought, over-worn vocabulary out of her system.

How effective simplicity can be is exemplified in the two works by Cohan, Twilight and Lacrymosa. Twilight, to music by Vivaldi, uses movements from an earlier work, Testament, created for London Contemporary Dance Theatre in 1979. Based on pacing steps, deep pliés and lunges, it uses bodies and the spaces between them as sculptural shapes. Two contrasting duets involving Thake and Stoneley reveal them to be equals, twin souls, capable of tenderness. An isolated man, Benjamin Warbis, is a brief presence, often cast down on the ground (without any resort to cliché).

Lacrymosa, a new work set to music by Dmitri Yanov Yanovsky, packs a powerful punch. It depicts the loss and return of a loved one (maybe the man’s faith?) in an intimate pas de deux, performed by Phil Sanger and Freya Jeffs. The woman supports and consoles the man, who moulds her around and over his body. She lays him down at the end in a cruciform position, touching his hand as the soprano (Dawn Upshaw) sings Amen. Cohan’s dance language is fluent and convincing in its sincerity.

Yorke-Edgell’s own work, Untethered, is the first part of a yet to be completed diptych ‘exploring the binds that tie us – emotionally and physically – and what it means to be released from ourselves.’ A woman, Amy Thake, is constrained by a web of elastic ropes on frames held by two men (Warbis and Edd Mitton). Two women help her escape, unwinding long ribbons wrapped around her like swaddling cloths. Stoneley, in red tights, shadows Thake in a duet, later reclaiming her from Mitton. So far, the message is enigmatic, the choreography somewhat similar to Cohan’s.

Yorke Dance Project is unusual, among small modern dance companies, in its respect for musicality and for the demands it makes for skilled partnering.  Most of its dancers are ballet trained, adaptable enough to perform Cohan’s Graham-influenced choreography, albeit without the grounded strength it requires. Yorke-Edgell is bringing back to life a repertoire of valuable works that are now rarely seen, as well as assisting the development of choreographers through mentoring schemes: an admirable endeavour that the Arts Council seems reluctant to support. 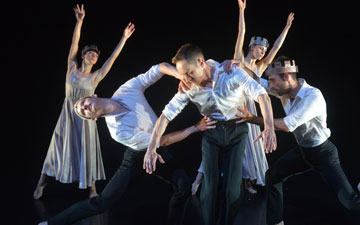 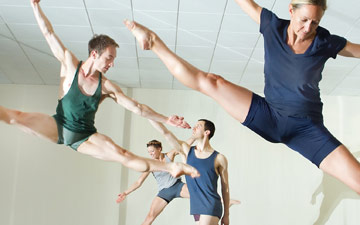 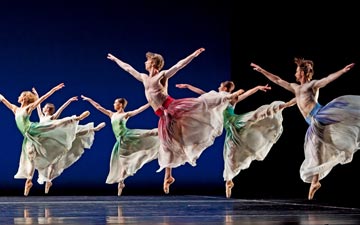