Just eight weeks ago, English National Ballet slashed and stomped its way through Akram Khan’s new production of Giselle, a blistering industrial reimagining of one of the most iconic ballets to emerge from the Romantic era. Now the company’s back in rustic Rhineland, bourréeing away in Mary Skeaping’s ethereal adaptation of the 1841 classic, created for London Festival Ballet (ENB’s predecessor) in 1971 and remounted on many occasions since.

The two versions are foils in many ways: the soft shoes of the former contrast neatly with the floaty pointework of the latter, as does Khan’s sweeping social critique with Skeaping’s focused storytelling. It’s easy to imagine them coexisting in the repertoire for some time, given the high quality and critical endorsement of each, though I suspect it’s Skeaping’s production that will endure in the long run, even as ENB continues its growing pursuit of adventurous contemporary commissions. Her marriage of silk and grit – embodied in the ghostlier-than-you-might-expect second act – is masterful, and she extricates the ballet’s tragic themes with chilling clarity, rendering them potent and universal.

A key part of her show’s allure is its atmospheric set, elegant and immersive as it is. The opening curtain reveals a pastoral tapestry come to life, a rich autumnal palette of bronze and russet settling over a sun-drenched village, while the second act whisks us to a misty, moonlit forest of white tulle and spectral blue beams.

Press night of this run saw ENB lead principal Alina Cojocaru take on the title role, delivering a gripping picture of innocence and fragility – a total 180 from the stalwart Giselle she created in Khan’s production. Her deportment here is pretty and youthful, all bashful gestures and eager smiles, and her dancing is trim and tidy: even in the more vigorous sequences, she reveals rather than brandishes her technique. Her cheerful ballottés and pogo bounces en pointe are a delight, but it’s during the desperate scurries of her distress – when she’s betrayed by her lover Albrecht (Isaac Hernández), dies from grief and is resurrected into the mystical world of revenge-seeking Wilis – that her agility really shines.

The plot of Giselle isn’t particularly complex, but the emotional journey of its protagonist as she goes from giddy ingénue to wronged woman to redemptive wraith is a demanding one. Cojocaru happily rises to the challenge, articulating her varied states – trepidation at the prospect of love, soon replaced by breathless adoration and then face-clutching, hair-tugging agony  – deftly, her transitions between them even and believable.

Hernández’s emotional range isn’t quite as fine-tuned here – he appears more confused than anything when Albrecht’s two-timing is exposed – but he renders his character’s affection and ensuing remorse convincingly. Like Cojocaru, he’s neat in his approach, tackling the choreography’s modest leaps and tight-knit turns proficiently but without bravura. Some of his best moments come in the second act, when Giselle, unwilling to abandon him to the Wilis’ wrath, sweeps him into melty duets dusted with exacting footwork.

The corps looked a little crowded in the first act, jostling for space amid carts and cottages, but came into their own in the bouncy harvest jig, weaving clean lines as Giselle is crowned ‘Queen of the Vine’. The women return in the second half as Wilis, tantalising in their wispy tulle and imposing in their long lines. Led by the imperious Queen Myrtha (Lauretta Summerscales), they chug, spin and swoop, dutiful foot soldiers in her vengeful crusade against disloyal men. Gliding through the trees, her torso curved and her face shrouded, Summerscales provides one of the production’s most arresting sights. Nothing about her deportment is harsh, yet she’s dominating all the same, diving into arabesques with formidable precision.

The magic in this production isn’t simply its bewitching ambience but also its harnessing of centuries-old themes in a way that resonates today. Innocence is shattered, and redemption peeps through at the darkest hour. It’s perfect viewing for these bitter winter nights. 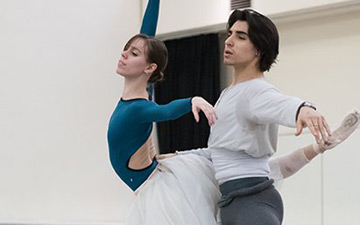