At first sight the two works in Aakash Odedra’s solo show at Sadler’s Wells Lilian Baylis Studio could hardly be more unalike. The first, Echoes, is a virtuosic demonstration of Odedra’s skills in classical Indian kathak dance, choreographed for him by Aditi Mangaldas, and a blazing demonstration of both speed and finesse. The second, I Imagine, is a contemporary work by Odedra, using a voiceover by poet Sabrina Mahfouz, which eschews that elegant virtuosity in favour of a more theatrical presentation involving masks and dialogue. Yet there are elements in common. Ultimately they both deal with finding our place in the world.

In Echoes, a group of golden cords, threaded with bells like those that kathak dancers wear around the ankle, hang down at the back of one side of the stage. In the opposite corner is a heap of golden cords. The floor between is illuminated from time to time with projections with what could be tree roots, linking the golden elements together. Odedra moves between these features. At times he rests on the golden pile, at others he investigates the hanging ropes of bells. He looks from one to another and then at the audience as if deciding where to go, as if these represent opposing forces, the past and the future, both of which attract but pull in different directions.

These deliberations are punctuated by thrilling episodes of dance. Some are ferociously speedy, a whirlwind of turns and spiralling arms, others more restrained and demonstrating the fluid quality of his arms and especially his hands which curl and tumble around each other like courting butterflies. The slap of his feet against the floor resounds powerfully. Odedra’s costume of wide pants is topped by a black tunic, secured by golden tapes hanging down in a long tassel and these catch the light and emphasize the speed of movement in the turns. One circuit of spins was so rapid that the arms became a blur.

The opening moment had shown us Odedra flinging his strip of ankle bells in the air where they sparkled in the light, before abandoning them. Ultimately he decides to reclaim these essential tools of the kathak dancer, and straps them on to give us an introduction to their silvery sounds accompanied only by his percussive feet. Our final image is of Odedra appearing to climb up the rope of golden cords as the light dims and we are left in darkness with just the sound of the bells as they slowly fade away.

I Imagine is a rather different creature, a theatrical exploration of migration and belonging with comic and affectionate moments offsetting images of anxiety and fear. Three piles of battered suitcases form the scenery, and these are restlessly moved and rearranged by a harassed Odedra. At one point he forms them into a temporary sofa, at another a shelter, which inevitably collapses, or builds walls and barriers.

The opening gives us Odedra slowly battling his way out of a huge suitcase decorated with multicolour union jacks. This provokes a good deal of audience giggling as a foot with remarkably prehensile toes emerges, and the suitcase scuttles along like a crab in its shell. From the cases he produces masks, which he dons to explore different characters. He has a convincing command of accents and his body morphs to inhabit the different personalities, visibly shrinking as he becomes an old man. Sabrina Mahfouz’s words reflect on what home is and what it means to us. Odedra voices his characters’ concerns. “Do I fit in now?” is the plaintive cry of a woman.

It’s while before you get to see Odedra dance rather than move objects. His body language here is loose limbed and fluid, with much of it based on the floor, falling to earth, rising and falling again. Just here and there his delicate hands recall the kathak movements we saw earlier.

The darker side of the migrant experience appears where an angry local yells get back to the country you came from, and there is an anguished section where Odedra’s orange T-shirt becomes a hood in a nightmare vision of incarceration and suffering. But the final picture is not entirely bleak. Odedra manages to dance a few steps with cases piled precariously on his head. Having shed them he sets off like a tightrope walker along the top of a line of suitcases leading him towards us.

This was the London premiere of Echoes, which is planned to tour the UK this autumn. You get a striking range of experiences and skills in a single programme from Odedra, and it would be worth a ticket just for his exquisite kathak work. 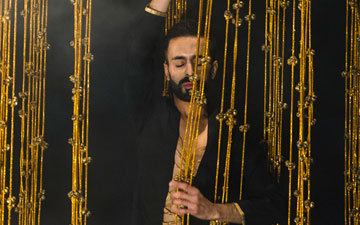 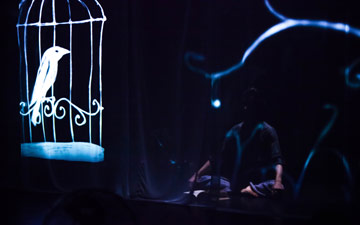 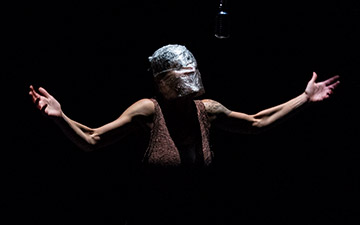