I begin this notice with a codicil. Let this preamble show my unbounded admiration for the spirit and rationale of Project Polunin. It is always a worthwhile experience to see this young man dance, even if it does serve to highlight all the missed opportunities for doing so over the past five years.

In case you’ve been in solitary confinement over that time, Sergei Polunin was the youngest principal dancer that The Royal Ballet has ever had but he gained more fame for walking out of that institution, aged just 21, in 2012, than he ever had as one of its leading dancers. Suddenly, this newfound notoriety took his name out of the arts sections and onto the front pages. At the time, he declared a desire to find A-list celebrity, perhaps as an actor in the USA; but, instead, he rediscovered a passion for ballet, in Russia, through the guidance of another great dancer, Igor Zelensky.

Today, Polunin is certainly ballet’s “A-lister” and thanks to 18 million views of his YouTube-distributed solo to Hozier’s Take me to Church, his celebrity has extended beyond the balletomanes. Ironically, now that he seems to be at peace with ballet, Polunin is breaking through into acting with a role opposite Jennifer Lawrence in Red Sparrows and a part in Kenneth Branagh’s upcoming Murder on the Orient Express.

It also helps to be one half of dance’s celebrity couple, alongside Natalia Osipova. Last year, he supported her Project, a triple bill of new work; this year, she returns the second fiddle favour for his triple bill. The similarity doesn’t end there. It seems to be an unfortunate truth that great dancers are, far more often, than not, incapable of making or producing great work. A 45 year-old reminder of this tendency is evidenced in the opening number, an example of all that was not so good about Soviet Union ballet in the 1970s.

Vladimir Vasiliev was one of the greatest dancers of the age – also part of a star ballet couple, dancing alongside his wife, Ekaterina Maximova – but history has shown that this greatness did not extend to the art of making dance. This UK premiere of an extract of his 1971 ballet for the Bolshoi, Icarus, was of historic interest since it was Vasiliev’s choreographic debut, coming just three years after Yuri Grigorovich created Vasiliev’s signature role, as Spartacus.

Here was just a brief extract of that full-length ballet, separately identified with its own chapter heading, as Icarus, the night before the Flight, concerning the parting of Icarus and his beloved Aeola on the night before he flew too close to the sun. Vasiliev has carved out a second artistic career, as both a poet and a painter; and his paintings have been turned into serviceable background computer graphics as the work’s main set design.

It is also of interest because Maximova had a huge influence on the crafting of her role, as Aeola; and by far the best of this balletic time capsule, was Osipova’s mastery of the soft, flowing lines and plasticity of Maximova’s dance. Outside of this, the neoclassical choreography is notably unoriginal, being derivative of the artistically-constrained pipeline of mid-twentieth century Soviet ballet. Polunin and Osipova danced with athleticism and grace and their emotional connection was palpable but, as ballet, it was merely a pedestrian preservation steeped in Russian pickle.

The second work was another UK premiere, although – for me, at least – it would have been better for it to have remained in Moscow. Four soloists from the Stanislavsky Ballet (the company for which Polunin danced after leaving The Royal Ballet) performed an odd little number, entitled Tea or Coffee. Dressed in drab grey, they inhabited a domestic setting, something like a bunker, illuminated by a single fluorescent strip. Every now and again, a blackout was accompanied by the sound of smashing china and – when the flickering light returned – one of the four lay comatose on the floor. Not dead, because they got back up from time to time. Frankly, it would have been better if they had all stayed put, since the choreography appeared to consist mostly of pushing, shoving and dragging bodies around. Billed as a black comedy, it merely proved the cultural chasm in humour between great nations. The only possible upside of Tea and Coffee is that it might make a thematic double bill with Alexei Ratmansky’s forthcoming premiere of Whipped Cream, for ABT.

Polunin turned choreographer himself for Narcissus and Echo, which although billed as looking to the future, is steadfastly a throwback to the past. It is so Russian in terms of mythological subject, setting and choreography that – but for minor considerations – it could have been the revival of a Bolshoi one-act ballet from the mid-twentieth century (something like The Little Humpbacked Horse by The Fountain of Bakhchisarai). Polunin is a collaborative creative spirit and the choreographic credit is shared with Osipova (who created her own variation), Jade Hale-Christofi and Valentino Zucchetti (another Royal Ballet dancer, Nehemiah Kish also earns an artistic credit).

The reimagining of this myth retold in Ovid’s Metamorphoses is also an artistic collaboration between Polunin and the composer, Illan Eshkeri, and in that respect, it is a success. Eshkeri’s score is lush and cinematic, providing some memorable themes, even if the miniature orchestra is a tad over-amplified (although it is always a bonus to have live music). The best of the choreography came in Osipova’s own variation for Echo in gorgeous floating movement, drifting through space rather like soft fabric billowing in a gentle breeze.

There is a delicious irony in Polunin’s first leadership project being the story of Narcissus, the hunter known for his handsomeness who fell in love with his own reflection. The dancer’s own looks have certainly aided his burgeoning reputation. His legion of adoring fans will certainly cop an eyeful in this role, where Polunin’s modesty is preserved only by a glittering, emerald-green thong with a codpiece covered in sparkly Swarovski stones. The costumes, for the small corps of Nymphs and Theban boys are beautifully designed by Brett Alan Nelson. Incidentally, it was good to see Maria Sascha Khan, Shevelle Dynott, Daniele Silingardi and Alejandro Virelles in this supporting cast.

The production concept (by Take Me to Church director, David LaChapelle) and the set design (Kristen Vallow) included a hole (the spring by which Echo and Narcissus die?) and a bunch of passing clouds, including two in which a reflection of the Milky Way can be seen. At some point late into the ballet, these become screens on which projections of Polunin are shown; finishing with a close-up of one green eye; and including a rather bizarre sequence of Polunin filmed wearing a shirt and tie. Why?

Project Polunin could also be called “Sergei and friends” because almost everyone involved is a long-time friend or previous collaborator. The downside of this is that there is often no-one willing to point out the inadequacies. Osipova and Polunin could make Morris dancing look beautiful, which will always be their saving grace. But, one wonders how much more worthwhile Project Polunin will be with better material and critical friends? 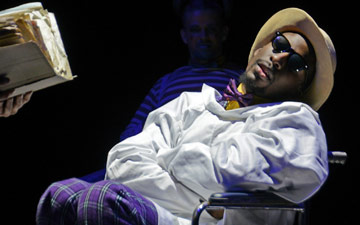 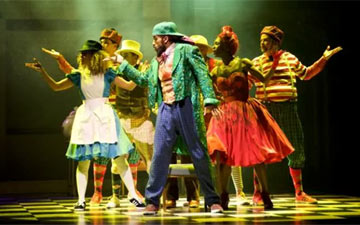 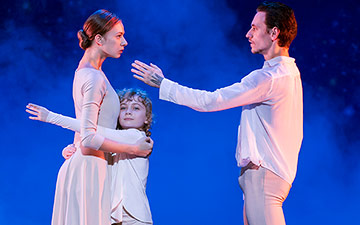 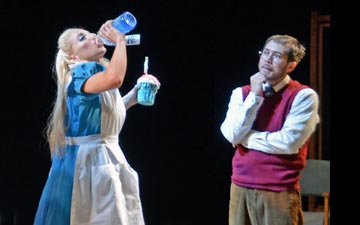