The fifth year of the National Youth Dance Company, run by Sadler’s Wells, has welcomed Damien Jalet as the guest artistic director, following on from his frequent co-collaborator, Sidi Larbi Cherkaoui, who performed the same function, in 2015; and once again, NYDC provides 39 young dancers with the significant development opportunity of working with a world-class choreographer and other creatives. It can be nothing other than a good idea.

Jalet’s last work on this stage was Gravity Fatigue, created – in 2015 – in conjunction with the designer, Hussein Chalayan – and in some ways he has returned to gravity for this new work, much of which concerns the need of a fatigued body to surrender to the inevitable fall.

The enigmatic title is a mix of two influences that have shaped the work: firstly, the strange mania, known as tarantism, that was reported to exist in the Neapolitan area of southern Italy from the 14th to the 18th centuries; and secondly, by adding an earthquake to this uncontrollable hysteria; hence, if you forgive my brief foray into the quizzical territory of Call My Bluff (younger readers, read on, or turn to Google), tarantism plus earthquake equals Tarantiseismic.

Reviewing a youth dance company is always a tricky thing. These are not professional dancers although everything else about the production is a professional show. There are certainly no issues with the unbounded commitment and energy of the young dancers who give their all to Jalet’s cause over the unbroken fifty-minute show. It was certainly a brief affair.

Jalet’s choreography is a mixed bag, starting slowly and ending with considerable ebullience, hair flailing, copiously. The opening sequence had the dancers cloaked in dark grey material, initially still and then gently rising and falling, shimmering and shaking, patterned like a corporeal Stonehenge. Only the heavy drumming of composer/musician, Dave King, gave a hint of the vigour to come. The next sequence had individuals and groups of young dancers entering a box of light to showcase their particular movement skills; before they all stood, staring accusingly at the audience, shouting a jumble of individual words, collectively, such that they all blended into one unintelligible mess.

So far, so poor. Depressingly unoriginal material for young dancers who deserved better; but thankfully from this low point, an interesting show began to develop alongside Jalet’s exploration of the impact of seismic activity on a mania to dance uncontrollably. The hitherto unseen drummer moved centre stage, cloaked in black, and the young dancers – dressed all in white – threw their heads back and forth with those great arcs of hair as the main movement motif. Synchronised, heavy breathing accompanied the heavy contract-and-release of the simulated tarantism. It was a mesmerising, breathless finale that contrasted hugely with the dull beginning.

The 39 dancers came from all over England, aged between 15 and 22. A few have returned for their second year; Niamh Keeling and Tommy Hodgkins – both 18, from Nottinghamshire and Devon respectively – are in their third year with NYDC and thus have now worked with both Cherkaoui and Jalet. The cohort brings together the widest range of pre-vocational training with street, contemporary and jazz to the fore. Beth Emmerson (17, from West Yorkshire) returned to the same stage, three evenings later, to partner John-William Watson in his duet for the BBC Young Dancer 2017; Watson is, himself, a two-time alumnus of the NYDC, having danced with the company in 2015/16.

It is no easy task to make a meaningful work on a makeshift company of young dancers, through a couple of brief residencies and workshops, often months’ apart, and – my reservations about the early choreographic sections, aside – this young group of dancers – and their mentors – should be justly proud of their achievement. 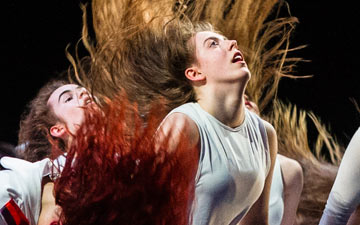 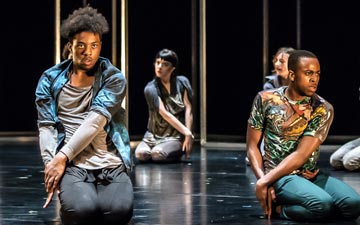 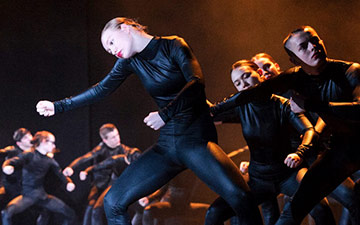