“I don’t want to take the tango technique apart. I want to find out where it reaches, how far it can go before it becomes something else.”

True to his word, Belgian choreographer Sidi Larbi Cherkaoui hasn’t deconstructed the art of tango in his 2013 work M¡longa so much as distilled and plied its essence – its elegant embraces and celebration of community between dancers. The production is named after a high-spirited kind of dance party from Buenos Aires in which participants tango in couples, swapping partners every few songs. The conviviality and cheer that characterise the milonga tradition infuse the proceedings here: it’s an entertaining show to watch and looks like a fun one to be part of.

Since its creation M¡longa has toured more than 20 countries, and its current run covers nine cities in the UK – its first showing to British audiences outside London and Birmingham. Over 90 minutes the piece explores the many moods and contours tango is capable of adopting: intimate tête-à-têtes and tense confrontations, melancholy encounters and passionate displays of desire. The 12-strong cast – complemented by an excellent on-stage band – includes various tango artists as well as two contemporary dancers who together navigate these tonal shifts deftly, maintaining an easy, convincing rapport. Gisela Galeassi, named World Champion of Tango in 2003, is especially engaging, with sultry glides and sinuous hips; Julia Urruty also makes an impression, for her fleet-footed manoeuvring.

The piece shines brightest during its group sequences, which feature dynamic level changes and compositions, including an all-male ensemble doling out sweeping turns and whip-fast footwork. Cherkaoui’s inventive configurations incorporate plenty of flair in the form of twists and slides, struts and swerves – moves that pay tribute to the cornerstones of tango technique while also playing with its sensuality and role as a social dance. Flashy dips and gymnastic contortions are woven in organically rather than singled out as tricks, and rich displays of emotion abound, from glee and ardour to sorrow and introspection.

Where M¡longa falls short is its heavy reliance on complicated lighting, video footage and graphics, which frequently dominate and distract from the dancing. There are also some clumsy scenes to reckon with, including a goofy, inconsonant vignette of pedestrians zipping around computer-generated streetscapes.

Cherkaoui permits some pure modern dance to flourish towards the end, first in a jolting solo from Silvina Cortés and later in a meditative duet with fluid rolls, leaps and embraces. The latter is one of the show’s lovelier phrases – emotive and physical, with no intrusive special effects. Along with polished technique, M¡longa has a lot of spirit to offer when it lets the dance take the lead. 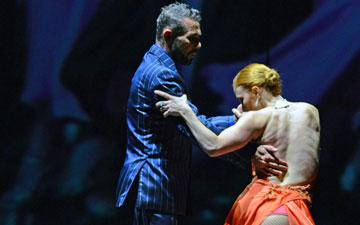 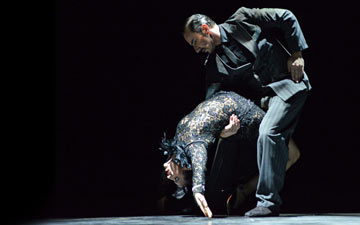