I forgot about Thierrée’s lineage until well after I got home and saw my notes to describe some of his movement: Chaplin-esque. But on the whole The Toad Knew is more spectacle than comedy, less comedy than mild terror, and less spook than song.

The vague plot suggests a group of children are held captive by a frog in an underground chamber. The slime, grime and grayscale tones of the set evoke something of the sludgy subterranean aesthetic of Jean-Pierre Jeunet’s “City of Lost Children” – also a tale of child captives. A woman cloaked in red velvet saunters around the stage singing in sultry tones throughout the production. Her headdress evokes Sarah Bernhardt, and her sumptuous, bejeweled robe, a medium out of an aesthetic movement painting. The singer is Ofélie Crispin, and exactly how she fits into the loose narrative is anyone’s guess. Her singing is used too much to be haunting or to foreshadow any plot.

The set is as much a character as the players. A constellation of spidery lanterns hovers over the stage. The contraption cranes its ‘neck,’ stretches its limbs, tilts and angles itself at the characters in the act of voyeuristic surveillance. A spiral staircase, a hulking piece of weapon-like articulated metal, a piano that plays by itself and a vitrine full of murky water, complete the set.

Thierrée is lean, lithe and hyper-articulate, as are the other performers. Much of their movement is influenced by realms of hip-hop and urban dance forms, and when Thi Mai Nguyen is on stage, Ohad Naharin’s gaga aesthetic also comes to mind. The other female performer, Sonia Bel Hadj Brahim, is well-known as an accomplished urban dancer, specializing in waacking, popping and locking to name a few genres. Some of the other characters, including Thierry, join her in some of the spastic, taut movements – in fact the two of them seem to converse only through spastic hand and arm movements.

The best moments in The Toad Knew are comic, but there aren’t enough of them. Old-fashioned clowning is sprinkled throughout the production, and long sequences of repetition – two characters stuck together, struggling to unstick – result in laughs when they are finally resolved. The slapstick physical comedy takes a backseat to spectacle and mood. Crispin is on stage almost constantly, which negates any effectiveness this may have, and slows everything down every time she shows up. Without showing much purpose for it, the show has no momentum. Aside from the fact that we’re supposed to be watching a bunch of kids try to pass some time in a dungeon, there seems no reason for the molasses like progression of the work.

As to the frog, we never know what it knew, and it appears in two incarnations: once as Crispin’s red hooded cloak (she pulls the hood over her head, and it transforms her into a velvet toad), and again in a large, billowing cloud of white plastic with wide-mouthed armature. This final reveal seems trite when an audience has sat through 90 minutes of watching characters get in and out of the vitrine, play with an animated piano, the spiral staircase, etc. The effort involved in using all of the sets, particularly the surveillance lanterns, seems wasted. If the frog was to have been revealed at all, one thought it might have been through a true metamorphoses on stage, a prop or set piece the audience had already invested in would be transfigured in some way (though still maintaining an element of surprise), rather than a previously unintroduced “other” unleashed on the audience at the last minute. The performances by all the players, including the anchor men in addition to Thierrée – Hervé Lassïnce and Samuel Duterte – are quite exceptional. The men get far more clowning in than the women do, who appear to be there for grotesque decoration more than anything else. But The Toad Knew drowns in its own muddy waters, and we only see just the tip of the iceberg of what these articulate performers can do. 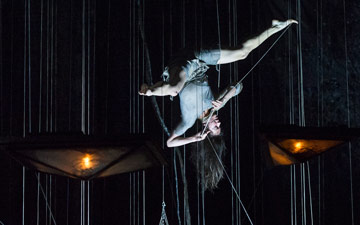 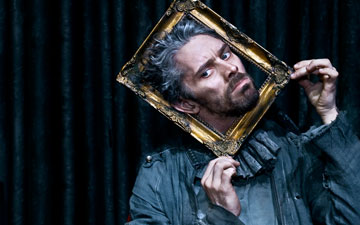 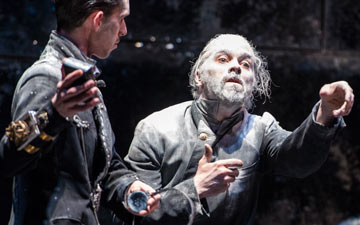