What role does the viewer play in contemporary dance performance? I suspect that a survey based on this question would produce an array of responses. There’s the viewer as witness, watching and being present with the choreographic artistry before them. There’s the viewer as analyst, trying to discern what a dance might be about, if it is, in fact, about anything. There’s the viewer as enthusiast or patron, supporting the performing arts community. And then there are programs and pieces that engage viewers on a different plane entirely, encouraging them, through devices like audience decision-making or proximity to the performance, to be active conversants in the scene. In these instances, the line between performer and viewer hovers in a delicious state of ambiguity, steeped in porousness.

During Margaret Jenkins Dance Company’s 43rd home season program, which opened Thursday night at the new Diane B. Wilsey Center for Opera in the San Francisco War Memorial Building, the audience found themselves in this latter state of being. With Site Series (Inside Outside) Reimagined and the world premiere of Skies Calling Skies Falling, Founder and Artistic Director Jenkins, the contributing collaborators and the company artists built an evening of choreography in which the viewer was immersed in the action, at times making in-the-moment choices that framed and guided their experience.

The program commenced in the Education Room at the Wilsey Center with Site Series (Inside Outside), a piece that is all about connection and closeness. A living room scene was set in the center (design by Mary Domenico) with the audience on all sides, right up against the performance space. With people seated across from you and all around you, this in-the-round formation certainly echoed the intention of the performance space, and did so with a distinctly egalitarian quality. It felt like we were in the living room too.

After a brief, poignant introduction by Jenkins, the dancing began – a layered collection of solos, duets and trios that revealed a range of human emotions and interactions. Alluding to comfort and self-care, Chinchin Hsu’s hand gently ran down her opposite arm, culminating in an intertwining of her fingers. Corey Brady watched the action around him in a casual stance, his penetrating expression suggesting a somewhat suspicious take on the scene before him. A duet between Brady and Brendan Barthel brought a more combative energy, at least at first, with contact improvisation technique and release choreography intimating two souls simultaneously pulled and repelled by each other. As their duet continued, the intensity, mood, and structure evolved and shifted, growing into a supportive, caring pas de trois with Kristen Bell – a reciprocal mélange of baring, giving and shifting weight, including a stunning cantilevered attitude pose. And peppered throughout Site Series (Inside Outside) was much charged stillness, and a returning finger snap that appeared to signal a change of subject or a change of focus.

With the seating arrangement, there were so many options when it came to viewing perspective. While the gaze certainly can travel in a traditional proscenium arch setting, in the round it feels quite different. Were we going to look at movement happening right in front of us or at a phrase further away? How long might we linger in one place before moving onto another choreographic idea? How did our location in the room affect what choreography was visible and what was partially obscured? Each audience member chose their own choreographic adventure, and as a result, no two viewings of Site Series (Inside Outside) were likely the same.

As the program transitioned to the premiere of Skies Calling Skies Falling, the spatial contrast was profound – now we were in the Taube Atrium Theater, which though new, is more of a traditional performance venue, with raked, bleacher type seating leading down towards an expansive, open stage. And yet even with that vastly different environment, the immersiveness that had been established during Site Series (Inside Outside) was still ever present.

I had read that shock was the primary thematic thread running through Skies Calling – shock from circumstances, shock from situations, from events and definitely from current unforeseen realities. A video prologue of the company, designed by Hi-Jin Kang Hodge and David Hodge and filmed by drone, started this exploration. While I don’t know that I saw or felt shock in this opening video segment, it did make me instantly invested in Skies Calling. When the dancers were filmed from above and looked up toward the drone, it felt like we in the audience were watching from a different lens. No longer were we in our theater seats, we had been transported to the drone itself.

As the ensemble entered the space and began shuffling from left to right in a collective wedge formation, the palpability of and reaction to shock rang through the theater. Kelly Del Rosario approached Bell over and over again and she continually pushed him away; gently at first and then with increased frustration, not wanting him to invade her space. Another solo by Bell toggled between looking wantingly out on the horizon to a series of tortured rolls/turns to being thrown backwards by some unknown force. Hsu looked at her palms for answers like they were part mirror, part crystal ball, and then without those answers, spun around the stage, whirling like a changing wind. In addition, a number of postures and gestures depicting shock and disbelief recurred and repeated at varying speeds and dynamic levels: a flexed arm and hand that silently screamed ‘stop’; the mouth covered with one hand while the other pointed out into space at some unknown, yet unbelievable image; the body curved in towards its core in a protective gait.

About three quarters of the way through Skies Calling Skies Falling, a linear-based full company choreographic sequence took over the stage, looking and feeling like a fitting finale. But there was still more to come, and after that powerful full-cast statement, I didn’t know what to make of the last section of the dance. Though with a piece that mined so many aspects of the unexpected, it should come as no surprise that it didn’t end when and how I thought it would. 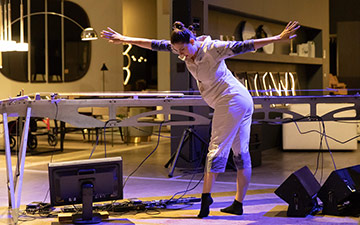 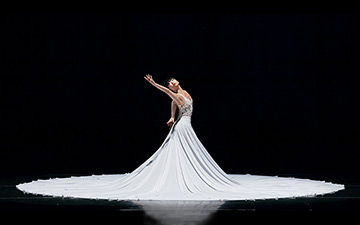