There is a cocksure, swaggering confidence about this company and these dancers, in this programme. It’s like Serena and Venus Williams turning up to play against the Much Wenlock Lawn Tennis Club. They just know they’re going to win. It’s loud, colourful, physical, rhythmical, boisterous, funny, and sad; in works that follow pure dance with tanztheater. It’s the best Rambert triple bill for awhile (and the last few have all been good).

It was good before Goat, but Ben Duke’s new work, here enjoying its London premiere, as the programme finale, suggested the best capsule of Pina Bausch creativity, not made by Pina Bausch. It even looks like an adaptation of the Kontakthof set; a ubiquitous “village hall” with a small stage, cluttered noticeboards and cheap hard-backed, plastic chairs. Goat integrates song, dance and spoken text with real-time film. It hits laugh-out-loud bouts of hilarity but is also riven with poignancy. It’s as rare as a talking goat for the same dance work to bring laughter and tears but Duke and his team achieve this roller-coaster ride of emotions.

The reference to Bausch extends to the personalities created throughout the ensemble, with each dancer clearly possessing a back-story even if we don’t know exactly what that might be; and there is another Bauschian association in references to The Rite of Spring (her breakthrough work), which provides a subliminal backdrop to the village hall activities. In a performance of dark humour and impactful sensitivity, Luke Francis is an understandably nervous and reluctant Chosen One; Hannah Rudd, a surly and uncooperative interviewee; and Vanessa Kang belted out a visceral, drunken, staggering interpretation of My Way that seemed especially effective as an allusion to both the setting and The Rite of Spring.

A small group of musicians occupied the raised stage platform with a piano, to the side on the main floor; this latter played by the music arranger, Yshani Perinpanayagam. The songs were all sung by Nina Simone, at some point during her career, although in the case of My Way and Feelings, they were classic, popular ballads also sung by many others. As Perinpanayagam writes in a brief programme note, Simone’s interpretations were inevitably characterised by an ‘unashamed rawness’ in idiosyncratic musical arrangements that she (Perinpanayagam) has attempted to replicate.

The singer, Nia Lynn, a vocal pedagogue who teaches jazz singing at the Royal Academy of Music, was – again, in the spirit of tanztheater – an integral part of the performance, freely roaming the stage alongside the other performers. No-one can imitate Nina Simone with any authenticity and Lynn makes no effort to do so, but she sings with her own power and clarity that adds, significantly, to Goat’s emotional edge. Her interpretation of Feelings, in the same arrangement as Simone’s Montreux Festival set, in 1976, was mesmerising.

In the midst of all this, another star turn was Miguel Altunaga, for once, not dancing; but, instead a diffident compere, working alongside Pierre Tappon as the cameraman. Altunaga’s portrayal of naivety mixed with deadpan humour and comic timing was a major feature of this work’s considerable fascination and his own self-sacrifice to save Francis provided a deeply sentimental climax.

Andonis Foniadakis’s Symbiosis was the second work in the programme to be of Autumn 2017 vintage and it has much to be commended; but, to be frank, it suffered by coming before Goat, meaning that much of its imagery was diluted by the power of the concluding piece.

Symbiosis is an abstract work that concentrates entirely on form against a backdrop that suggested rows of metal bars having been bent out of the horizontal by some giant power. The lighting – by Sakis Birbilis – was a key element in preserving the work’s mystery, as was Ilan Eshkeri’s eclectic and emotional score. Altunaga – who earlier in the day had been announced as a nominee in the National Dance Award for Best Male Dancer, in 2017 – was again the central agent of this work (although this time, through movement alone); beginning, as a prisoner, trapped within the “bars”, and ending, free, but alone on stage. His duet with Daniel Davidson was a particular highlight; but all sixteen dancers contributed to an excellent performance. As resident choreographer at Greek National Ballet, Foniadakis is little known in the UK but I expect that to change.

The programme had opened with Itzik Galili’s spectacular, hi-energy, colourful A Linha Curva – a popular revival of a work that Rambert premiered, back in 2009. The fluid patterning of 26 dancers (Rambert has to borrow some students from the Rambert School to make up the number) is – to my mind – much better enjoyed, viewed from above, rather than from close quarters, in the Stalls; and there were isolated moments of awkwardness when the full ensemble was navigating space around each other against the coloured lighting grid on the floor. Nonetheless, it is a compelling work, performed to an infectiously rhythmic, percussive score (by Percossa) that should instil joie de vivre in all but the hardest of hearts. 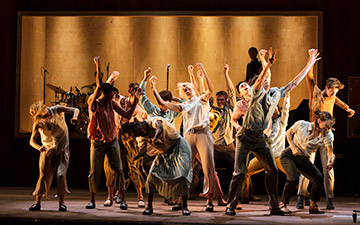 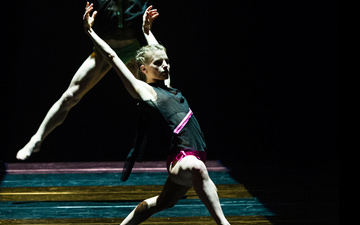 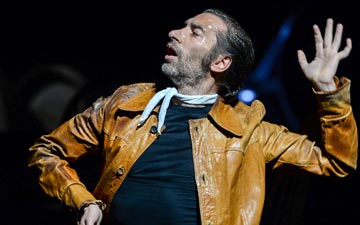