When Mira Kaushik, director of Akademi dance company, learnt of the UK’s plans to commemorate the centenary of World War I, she launched an ambitious project she had long wanted to undertake. The Troth is a retelling through dance of a revered Hindi short story, Usne Kaha Tha (1915), involving a Sikh soldier who fought in WWI.

The story isn’t well known outside India: nor is the fact that over a million Indian soldiers served in the Allied Forces, with the loss of 60,000 lives. Among the astounding archival film footage shown in The Troth are endless lines of marching Sikhs, rifles at the ready, as they leave for combat in the trenches of France and Belgium.

Akademi’s production has been extensively researched by a team of collaborators and there’s an impressive list of credits in the programme. So as well as bringing a fictional love story to life, The Troth is an eye-opener about aspects of the First World War that haven’t already been exposed during the centenary. When the company toured Indian venues with Usne Kaha Tha earlier this year, they found that many young Indians had little idea of their countrymen’s contribution to the Allied victory. Akademi’s audiences in the United Kingdom are about to be similarly enlightened, following the UK premiere in Leicester. A digital recording will be released for world wide viewers.

Mira Kaushik commissioned Gary Clarke to choreograph The Troth after seeing his contemporary dance production of Coal two years ago. They decided to translate the short story by Chandradhar Sharma Guleri as a ‘living silent film’, with dance, music, silent movie captions, archival and original film. Dramaturg Lou Cope has ensured that the epic tale, covering two decades, is easy to follow.

It is told in flashback, as the central male character, Lehna Singh (Subhash Viman Gorania) dies on the battlefield in Flanders. He recalls his meetings over the years with a beautiful young woman, Leela (Vidya Patel, finalist in the BBC Young Dancer competition 2015 and performer in Richard Alston’s An Italian in Madrid). In their first encounters in a marketplace in Amritsar, she is shy and runs away from his advances. He learns to his despair at their third encounter that she has just become engaged. Shri Sriram’s commissioned score refers to Indian folk music in these early scenes, as does the jubilant dancing.

Disappointed in love, Lehna enlists in the British Army forces in the Punjab. Daniel Hay-Gordon is the recruiting officer, a puffed-up English sergeant major in pith helmet and khaki shorts. The score now incorporates British military bands, duly credited in the programme. Lehna has joined up with others from the same area, following the Sikh martial tradition. A recruiting poster is projected, featuring a tall Sikh armed with a talwar, a sabre, under the slogan ‘The Empire Needs Men’. His distinguished bearing contrasts with the absurd physical training imposed on the recruits by the pompous sergeant. Archive footage shows Sikh soldiers practising their own martial arts, gatka, with talwars and sticks.

When war is declared, Lehna discovers that his new captain’s wife is the girl from the marketplace. She implores him to protect her husband and son, Bodha, who is in the same 77 Sikh Rifles regiment. The soldiers are excited at the prospect of fighting a European enemy, but she knows the likely cost. Vidya Patel has the huge, expressive eyes of a silent film actress and the skilled body language of an expert in kathak and contemporary dance techniques. She has infused Clarke’s choreographic ideas with her own vivid gestures and speedy footwork. No wonder the hero of Guleri’s story would die of unrequited love for such a paragon of womanhood.

Film footage reveals the horrific conditions of the battlefields in northern France and Belgium. Percussion in the music score becomes gunfire and exploding shells. Four men represent the Sikh artillery regiment: Gorania as Lehna, Songhay Toldon as the Subedar (captain), Dom Coffey as his son Bodha, and Deepraj Singh as their fellow Punjabi. Clarke’s choreography for them is fiercely physical, ranging from fighting, falling and scrambling to cooking, washing and bailing water with buckets in the trenches. Calm moments, praying and reading the Sikh holy book, are all too rare.

Confusingly, when Bodha falls ill and is cared for by Lehna, the immediate assumption is that he has been shot and is being dragged around in his death throes. A caption reveals that he has survived, and like other soldiers, has written letters home describing their desolate conditions. (The words are extracted from actual Indian soldiers’ letters.) Leela appears as a vision, lamenting in a red robe with her long hair hiding her face. Patel resembles a Kabuki performer – or Martha Graham embodying grief. The red fabric flares around her like a pool of blood as she spins and falls – while back in Belgium, warfare continues.

An episode taken from the story startles because of its potential for misunderstanding. A caricatured figure of a British officer (Hay-Gordon again) struts into view and offers Lehna a cigarette. Vital clues should not be missed. The ‘officer’ has replaced a steel helmet with a British military cap; Iron Cross medals are projected onto the backdrop; a British officer would know not to offer a cigarette to a non-smoking Sikh. Lehna denounces the German imposter and is mortally wounded. In the violent fighting that ensues, the captain and Bodha are injured.

Archive film footage shows military ambulances with Red Crosses on their sides. A caption explains that there is space for only two casualties. Lehna stays behind, asking that Leela be told that he kept his promise, his troth. As he loses consciousness, he relives his love for her. They dance together without touching, and she slips away from him like the ghost of Giselle. The tragic love story over, the final captions remind us that the fictional Lehla represents the many who never returned. Lest we forget.

The Troth is a gripping experience of a shared heritage. It’s convincingly told as a moving story of love and sacrifice, set in an all-too-familiar context of First World War horror seen through unfamiliar eyes (to many British viewers, I suspect). Though the movement language is that of dance-theatre, the silent film framing and South Asian-influenced music are reminders of its origins in Indian culture. The six superb dancers are British, benefiting from the fascinating background research into Indian and British sources in archives and museums. On tour, the performers have learnt how to claim attention back to the story telling, competing with revelatory early 20th century film footage of Sikh soldiers in action in wartime Europe. 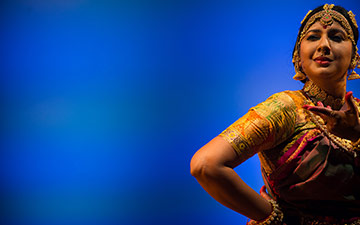 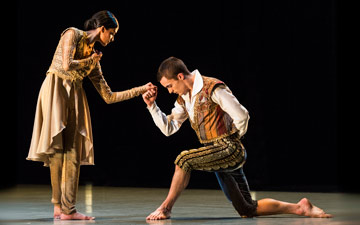 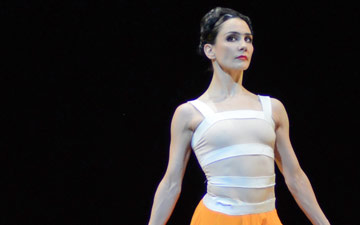