This work – one hour and forty minutes’ long, without an interval – consists of two disparate elements: one being several performers, live and onstage; another, a woman, barely alive and on film. In relation to the latter, I have to ask how one associates a star rating with a performance in which the largest, continuing visual image is a close-up, slow motion film of an actual death.

In so many ways, death is the final taboo, at least in ultra-conservative Britain. Mortality is not a subject we tend to talk about, at least, generically, as opposed to how it affects our families, friends, colleagues and those with whom we are familiar, in public life. And, yet, it is a subject widely discussed in other cultures in which death is often the cause for celebration, as much as sorrow. This work, by Alain Platel and Fabrizio Cassol, should be recognised for confronting this challenge to those of us who prefer not to confront considerations of death unless it particularly affects the hinterland of our lives.

The programme credits make clear that this show’s creators are ‘sincerely grateful to L. and her family for their exceptional candour, their deep trust and… unique support…’, which indicates that the film of L.’s death was made with her support and that of her family. Nonetheless, depicting a woman barely conscious at the beginning and lifeless at the end – jaw sagging, mouth open with the unmistakeable waxy pallor of a corpse – appears unacceptably intrusive and is deeply distressing to anyone who has witnessed the slow death of a loved one through fatal illness. The only mitigation is that we spent only one hundred minutes watching L.’s life ebb away and not the months, or even years, that such mortal deterioration usually takes. The slow-motion intimacy maximised her every discomfort: the dehydration signified by unconsciously licking lips; the difficulty in opening eyes that were almost glued shut. And, then there was the desperately poignant image of a clearly beloved stuffed toy resting on her chest. It is not exactly victim art, but it certainly lies somewhere on the spectrum towards it.

The film overshadows everything else and my advice is to close one’s eyes and listen. On stage, fourteen excellent musicians alternated between regular and lengthy periods of inactive silence, with a fascinating, alternative reality for Mozart’s Requiem mass, composed (and unfinished) in the months prior to his death. A mix of song – individual voices rather than choral (omitting the bass soloist), percussion, electric guitar, accordion and euphonium replace Mozart’s chosen instruments in Cassol’s orchestration, which is clearly masterful, having taken three years to complete, but is often unrecognisable such that the compositional skill is ambiguous. There are, however, magical, spine-tingling, musical highlights. The three lead soloists were equally impressive: beginning with the vocal clarity of New Zealand countertenor, Stephen Diaz; the polished soprano of Nobulumko Mngxekeza; and the commanding baritone presence of Owen Metsileng.

The stage was studded with a pattern of grey, coffin-shaped platforms of varying heights, in a grid that was interrupted by a space that housed the drum set. Some of the platforms had indistinct materials resting on them, which performers touched and held to their noses. The musicians stood or sat on the platforms, danced upon them or lay, facing the screen. This was a concert with movement rather than a danced performance but when let loose to move, Boule Mpanya – in particular – did so with great athleticism, control and a distinctive, hip-hop-based, movement quality.

There was little overt interaction between the 14 performers and the dying woman on screen although, periodically, some performers would turn and motion towards her, sometimes as if in encouragement or even as a celebratory gesture. But, mostly, there seemed little or nothing to connect the two entities. To be brutal, I would have preferred the stage show to have been left alone and L. to have been left to die without this subsequent exposure to paying audiences. 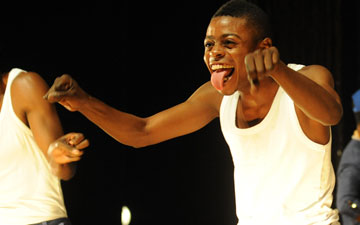 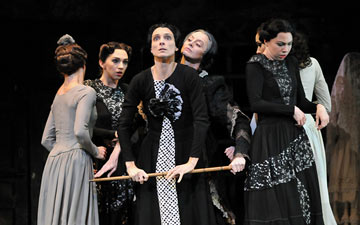 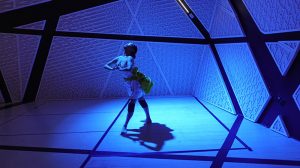