The Merry Widow is Robert Helpmann’s great gift to the Australian Ballet. It premiered in November 1975, soon after he learned his contract as artistic director would not be renewed. Helpmann was devastated and furious but the Widow, his swansong, went ahead and kept going ahead for the next 43 years. The Australian Ballet has perpetual rights in the ballet and the company has staged it more than 400 times since the premiere.

It was, and still is, a comforting balm for the audience with its sentimental plot, the endless waltzes, the off-again on-again romances, the luxurious costumes and the all’s well ending.  As they say on the plane before take-off, you can sit back and enjoy the flight.

The Widow is back for a three-week season at the Sydney Opera House where old timers like  to remember their favourite casts of the past, from the first season (Marilyn Rowe and John Meehan in the leading roles) to the last time it was staged in Australia, in 2011, with Kirsty Martin, Rachel Rawlins, Robert Curran, Brett Simon and many others in the main roles. Both Martin, now retired from the company, and Simon will be reviving their roles this season.

Amber Scott, as Hanna, the Widow, and Adam Bull, as Count Danilo, were the perfect choice for opening night. Both principals have been in the company for more than 15 years and have danced the roles before. Their ability to interpret Hanna and Danilo has increased with time as they dance/act through the “love you/no I don’t love you” scenes until the ending when Danilo places Hanna’s voluminous white cloak around her shoulders and they waltz to the last note of the music with joy.

The Australian Ballet has no prima ballerinas now and officially never has. If they did, it may well have been Scott for her elegance, stagecraft and purely classical lines. Leanne Stojmenov as Valencienne and Andrew Killian as Camille were well cast in their roles of (almost) secret lovers and Colin Peasley, as Baron Zeta, the ambassador at the Pontevedrian Embassy in Paris, came back to the stage with aplomb on Saturday evening, 43 years after he played the role at the premiere. Steven Heathcote, the Australian Ballet’s ballet master, will also play the role of the Baron, alongside the company’s artistic director, David McAllister, who will come back to the stage as Njegus – the ambassador’s secretary. The two former principals will be well worth seeing together.

Helpmann, who wrote the scenario in the ‘70s, was smart with his choice of collaborators – the choreographer, Ronald Hynd, the designer, Desmond Heeley, and John Lanchbery, who arranged and orchestrated the music from Lehar’s operetta. Hynd’s choreography is an amalgam of Viennese waltzes, many lifts, tricky turns (pirouettes in attitude both left and right, then left and right again) and in the second act, a mélange of Russian and central European dances, including a mazurka, polonaise and czardas as the Pontevedrians put on show in their red boots, embroidered black and red vests and skirts, and for the men, baggy pants. Despite the energy exerted by all the dancers, the folk dancing looks dated, as if snippets were chosen from a 1960s/70s Soviet era touring show, while the passionate pas de deux for Valencienne and Camille in Act 2 is the highlight of the ballet.

Desmond Heeley’s sets and costumes depicting Chez Maxime in the age of the belle époque are exquisite, with their glorious colour palate of red, orange and  black and white, with the women wearing off-the-shoulder dresses and the men in top hats, white ties and tails. Meehan remembers Heeley telling him he thought he’d gone too far with the design and costumes. As Heeley said, “I’ve never gone this far out on a limb in my life”.  Going that far out on a limb adds immensely to a work that won’t be remembered as a classic in the ballet repertoire, but one that warms the heart. 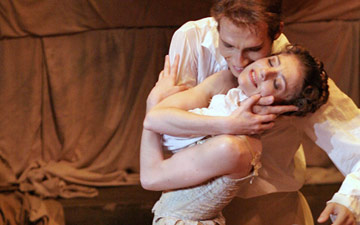 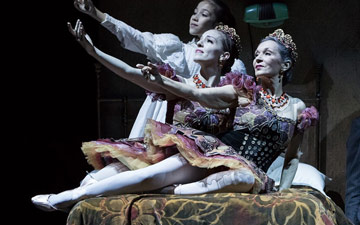