An hour in the company of Nikki and JD is well spent; and that despite the fact that their relationship is – to say the least – ambiguous! We know this, partly due to the title of their duet, Knot; and partly because of the witty spoken text that flavours the action, each line thoroughly stamped with the imprint of Ben Duke, credited here as dramaturg; the dry humour resonating so well with the duelling dialogue in Duke’s recent hit for Lost Dog, Juliet & Romeo, that it seems to have come straight from that cutting-room floor (or vice-versa).

It is heartening to see that this work was first premiered as part of the Resolution Festival at the Place, in 2016, which has deservedly grown, through subsequent touring and festivals; here, presented as part of the Roundhouse CircusFest.

It reaps the benefit of an engaging and charismatic duo who keep their audience enthralled through a roundabout of words and impressive flurries of hand-to-hand acrobatics (they describe their art as acrobalance), which gained greater credence due to the intimacy of The Place’s 280-seat theatre. The pair need nothing other than a microphone to augment their agreeable humour, believable acting and mutual superhuman strength and balance to mount a thrilling and entertaining show; perhaps pioneering a new genre of comedy acrobatics.

Teaser of Knot from Nikki JD Acro on Vimeo.

From the outset, Nikki Rummer and Jean-Daniel Broussé (JD) would have us believe that their match is a love to rival that of Romeo and Juliet and Knot starts in a similar style to Lost Dog’s recent modern take on Shakespeare’s romance, with both Nikki and JD giving separate accounts of how their relationship started and developed. She was dating someone else but as soon as JD appeared on the scene, he was immediately “the one”. He, on the other hand, is less involved, with one tale, humorously and disarmingly told, being about a lie given as his reason – faithfully accepted by his gullible partner – for missing an important date.

As the work progresses, we realise that this duet is not describing a pair about to tie the proverbial Knot but one of unravelling their tangled, twisted mass of half-truths and deceptions. “What I said,” confesses JD, “it was the truth…it just wasn’t the whole truth…”. The explanation for JD’s detachment is obvious to anyone with a reasonably-attuned “gaydar” and – sure enough – midway through the work both performers admit that their pairing is purely professional since (spoiler alert) JD is indeed gay; the conceit being a double-header – the pretence that a heterosexual couple would make for a better show, coupled with the deliberate unveiling of the “truth”.

From then on, it’s all about Nikki and how the continual toil of working with JD, rehearsing with JD, sharing rooms with JD on tour (to save costs), eating with him, socialising with him, etc, has blighted her own love life; not being kissed for two-and-a-half years being one of her several “confessions”.

The feats of acrobalance and spoken text were interspersed with brief interludes of contemporary dance, performed to an eclectic musical score, ranging from Chopin to Dean Martin and – it appeared – including a vague, subliminal reference to football commentary – that is until realising that it was the live commentary of Brighton vs Spurs somehow being picked up as electronic interference!

Nikki and JD behave like a couple; they have lovers’ tiffs, they walk away from one another (one hilarious episode has JD not knowing what to do with himself when Nikki storms offstage); they bicker and they make up. But, underpinning all of this emotional turbulence is the intense, unconditional, unwavering mutual confidence and skill in their hand-to-hand work. Late into the act, they even reverse roles with Nikki holding JD aloft in a perfectly-balanced pose.

There is so much feeling and sensitivity in their relationship that we come to understand that Nikki and JD are, indeed, “lovers”; and that, irrespective of sexuality, the string that ties them together is a physical partnership that demands an extraordinary mutuality far stronger than that which conjoins most ordinary couples. 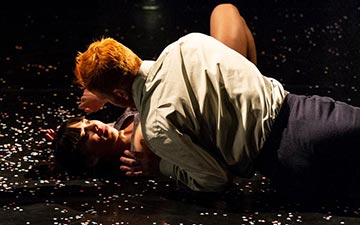 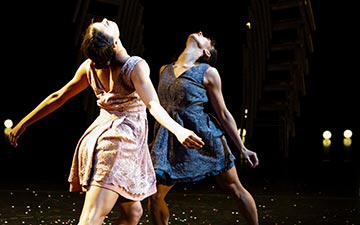 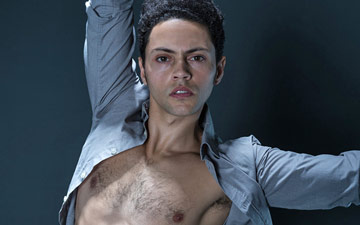