Wayne Parsons Dance plays to a packed house at The Place. We’re here expectantly to see the artistic developments of Parsons since he founded his company five years ago. Tonight he performs in Meeting, the duet he made for Resolution back in 2013 and presents a new group work, Vestige both of which show his preoccupation with narrative and memory.

Although I haven’t seen Parsons’ work before, I can see very quickly why it’s riveting. Audience members around me are palpably affected and it’s partly because of his conversational, visceral movement style. Driven by the ways in which two people connect in a relationship, Meeting, tests out Parson’s corporeal communication skills. Joined by Katie Lusby, the pair are a solid unit, quickly responding to each other, taking it in turns to initiate actions or steps. A range of emotions are readable from their speedy, sharp reactions, hesitations and reflective pauses. Are they new lovers, thrilled yet nervous with each other or old friends trying something out in the studio?

Interchangeably they teach or follow each other, suggesting new movement combinations or dynamics, manipulating each other to instigate motion and enjoying the sensation when it feels right. They converse through intense physical articulations: a hand flip, a lean, a shift of the upper torso, a pushing away by a foot; using all surfaces of the body to explore the nuances of their relationship. Dancing through highs and lows, sometimes they abandon themselves to luscious, long phrases of unison movement which contrast with the frequent disruptions and abrupt pauses. While they are mostly friendly and affectionate at times the tension increases and rougher adjustments and lifts suggest annoyance or irritation.  Parsons and Lusby make their process very clear through intricate movement vocabulary and their spirit of investigation keeps the work fresh.

Vestige is a piece of dance theatre for four protagonists that is organised again around a strong narrative focused on fame and memory. Crafted with dramaturg Pooja Ghai and writer Ankur Bahl, Parsons’s choreography tells a complex story, posthumously, about a young celebrity (Grace Jabbari) who has committed suicide. Her ex-husband, (Ian Garside) a portrait painter, (Katie Lusby) and a fan/archivist, (Sonya Cullingford) reflect on her enigmatic and glamorous life through dance and spoken word. Livia, the deceased celebrity is also present throughout like a continuous flash-back to further invigorate her acolytes’ stories.

Vestige morphs together a series of character sketches which while focused on Livia say as much about the three people associated with her. Totally believable, they have been sucked in by her capriciousness, her gorgeous, celebrity charms mixed with a tragic vulnerability. The ex-husband is jealous of everyone, when he partners Livia his movement is controlling and grounded in contrast to her breathy fragility. The portrait painter soon emerges as a self-seeking, screwed up personality who is initially intoxicated with Livia, but soon tires of her. Her playful action and words reveal a teasing, mocking character. While the brisk, pernickety archivist who is about to open an exhibition of Livia’s possessions is preoccupied with her own ideals of perfectionism, relating to Livia as if she were just another precious exhibit.  Her precise, functional actions such as treading on the spot while shouting out bossy instructions, vividly embodies her ambitious character.

What’s interesting about Vestige is that text and dance are so seamlessly interwoven, mostly, that one doesn’t notice whether the performers are dancing or talking. Another layer of meaning which blends smoothly into the narrative is conveyed by the props – a mobile clothes’ stand which displays some of Livia’s outfits. This too becomes as central to the staging as the choreography, music and text and as the performers move it around the stage the costumes flutter and sway like faded leaves on a tree. It’s an evocative image in which we see ephemera associated with the celebrity linger in the air, like a flood of recollections.

While brilliantly performed, sometimes there is an over-communication through Vestige’s various narrative strands and not enough space for our imaginations to roam. For example Livia’s last solo, moving as it is, feels too literal and fleshy for someone who is meant to exist as a memory. It might even be enough if Livia were to exist simply as a memory, brought to life through the others’ reflections.

Parsons’s work, however, communicates a powerful story about the corruption of fame and the sobering aftermath of a celebrity death. 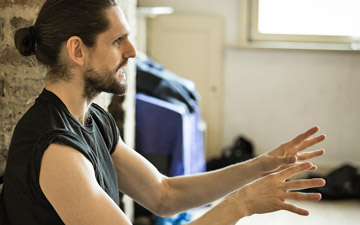 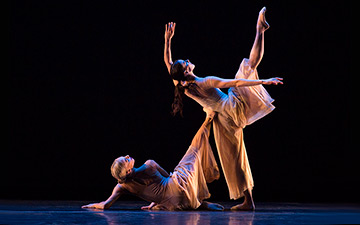