How are companies to decide which ballets remain part of the classical repertoire? Originally choreographed by Petipa in 1877, La Bayadère exhibits all the xenophobia to be expected from “exotic” Imperial Russian ballets about people of color. It presents a cliched Russian depiction of ancient India with a hyperbole of spectacle: a tiger proudly displayed after a recent hunt, a snake that fatally bites the heroine on her neck, and a tumultuous, fiery earthquake sent from the gods in order to restore amorous justice. The orientalization in La Bayadère calls to mind the depiction of the Egyptians in The Pharaoh’s Daughter, and the Turks in Le Corsaire.

Certainly, datedness is not a reason to write off a ballet, but perhaps there ought to be a burden placed on such productions to prove themselves as relevant parts of the repertoire. I have yet to see a performance of La Bayadère which justifies its position among the classics. It features the same betrayal scene, vision of reunification, and reuniting of lovers as other classic romantic ballets, but offers less in character development, stakes, and nuance than, say, Giselle, to which it is often compared. Indeed, La Bayadère often feels like a campy, orientalized Giselle, but lacking in Giselle’s humanity: While Giselle’s grace is the force that spares her prince Albrecht from the wrath of the Wilis, the lovers in La Bayadère are reunited thanks to an absurd intervention from the gods. While we see Giselle and Albrecht develop their relationship over time, La Bayadère’s characters can feel like hyper-stylized caricatures in comparison.

My argument is not one for censorship nor for “fixing” the classics to make them palatable for modern audiences. Rather, as Benjamin Millipied said in an interview about leaving his post at the rigidly traditional Paris Opera Ballet after only two years, ballet “was created in is this occidental art, of white people, for white people… I think we need to ask, “Does it reflect our time?” There was a time where, in the Romantic era, in the 19th Century, the general culture was part of dance…. Dance should say something about who we are as people and where we’re going, like literature does.” He articulates a hopeful vision for ballet, one that can certainly include classics with timeless meaning. However, watching La Bayadère can feel like observing an artifact stuck in another era, and indicates the need for a conversation about what a contemporary, forward-thinking repertoire should look like.

On July 13 I saw American Ballet Theatre (ABT) perform La Bayadère at the Music Center in Los Angeles. Natalia Makarova brought the ballet to ABT in 1980, before which it was mainly performed by Russian companies. She eliminated some of the most problematic elements, like young boys in blackface, while the versions performed in Russia and Paris tend to keep them.

The casting of ABT’s performance was excellent. Two principals, Isabella Boylston and Misty Copeland, played Nikiya (the temple dancer) and Gamzatti (the princess to whom Nikiya’s beloved is engaged) respectively. Boylston only debuted the lead role of the temple dancer last month and portrayed an especially nuanced and expressive Nikiya. Solor was also well-interpreted and danced by principal Jeffrey Cirio. Despite the ballet’s length – over three hours — we first see Nikiya and the warrior Solor in the throes of their love, meaning that the audience does not get much time to see their relationship develop or see Solor’s reaction to his arranged marriage. No matter — Boylston and Cirio are both potent actors, able to articulate both the fidelity of their love and deep distress even in their stage exits. It was Cirio’s last performance with ABT, and he fittingly received an abundance of applause for his dramatic dancing. Misty Copeland, who is consistently excellent in character roles, played an imposing Gamzatti, but with a humanized gentleness that showed she, too, longs for love.

In Act 3 of La Bayadère, something magical happens. The Shades scene, a 37-minute Wilis-equivalent interlude in which a guilt-stricken Solor, under the effects of opium, dreams of searching for Nikiya in the land of the dead, is often thought of as La Bayadère’s saving grace, and one of the most iconic scenes in classical ballet. Mikhail Baryshnikov must have been considering the Shades scene when he wrote in his autobiography, “La Bayadére is one of the great, if not the greatest, classical works in the history of ballet … Poetically it is unmatched in the classical repertory”. Certainly, I’m not sure any other scene in the ballet warrants such an assessment.

In the scene, a cascade of the ghosts of Nikiya’s fellow temple dancers descend from a mountain, a stunning visual display inspired by Gustave Doré’s illustrations of Dante’s Paradisio — and a true test of the corps de ballet’s precision. The Shades scene also bears historical significance given its gesture toward the great plotless, textural modern ballets of the 20th century, and a shining example of peak Petipa choreography. On Friday’s performance, the corps de ballet was not up to ABT’s usual standard of classical exactitude. Arabesques wobbled and varied in height, and exits were made sloppily. The scene, which when done well acts as a stunning, dreamy depiction of unity, is too easily marred to be danced by a less than solid corps, though soloists Sarah Lane, Cassandra Trenary, and Breanne Granlund were each mesmerizing.

I’m curious to see if a convincing case can be made for keeping La Bayadère in the repertoire. When even strong performances from the principal dancers are not enough to add up to a captivating production, it might be fitting for companies to either reinterpret their production or focus on less tired, out-of-touch ballets that accomplish the same feats without Bayadère’s needless cultural appropriation.

Emily Wells is a Los Angeles-based writer who contributes to publications like Vogue, The Los Angeles Review of Books, and Document Journal. She received her MFA in creative writing from UC Riverside in 2017 and has edited for several fashion publications including Purple Fashion Magazine and Flaunt Magazine. Website: emilywells.net 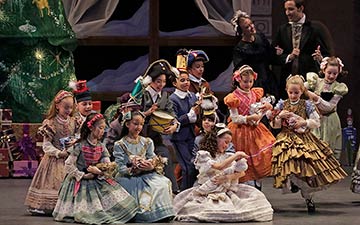 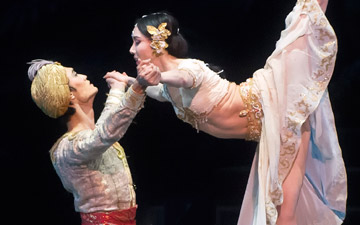