In the Temple of Love

What makes a ballet feel stale? The question hovered insistently in my mind as I watched two performances of American Ballet Theatre’s La Bayadère this week at the Metropolitan Opera House. It’s never been my favorite ballet. The story is a classic love tangle, but with an exotic twist: it’s set in a kingdom in a mythical India of the distant past. A temple dancer (or bayadère) is desired by a high priest but loves a proud warrior, who, in turn, is betrothed to a wilful princess. The setting, however, is completely at odds with the waltzy, music-hall score by Ludwig Minkus. The look, or “plastique” – a favorite word of balletomanes – is only intermittently exotic. The midriff-baring costumes and golden, or purple, tutus are incongruous. And yet, in the past, I remember enjoying its luxuriant atmosphere and appreciating its sheer preposterousness: the stuffed tiger in the first act, the hoochy-koochy harem girls at the Raja’s palace, the curled fingers of the golden idol, and the final earthquake that swallows up the cast in the end.

The ballet has its transcendent moments, of course – otherwise, it wouldn’t have survived for as long as it has. It premièred in St. Petersburg in 1877, with choreography by Marius Petipa. This production, from 1980, is by Natalia Makarova, who often performed La Bayadère as a young dancer in Soviet Russia. Hers was the first full production of the ballet in the West. The most famous passage is the “Shades” scene: twenty-four women in white, representing spirits, descend in slow succession down a ramp – sorry, the Himalayas – repeating the same sequence of steps, over and over. It is a scene of intense poetry, one of those images of celestial harmony to which ballet is particularly suited. American Ballet Theatre’s corps de ballet dances it beautifully, with a gentle lilt, creating an illusion of shared breath.

Another stirring set piece is the heroine’s keening dance in front of her lover and his betrothed in the moments before her death (by snake-bite), full of slow bourrées, floating balances and deep, aching backbends. It prefigures the opening step of the Shades, an arabesque on a bent leg, followed by a step backwards, back arched. A great ballerina like Alina Cojocaru (who danced the role on June 5) can make much of this moment, her body transmitting the desperation of loss and betrayal and, by the end, an acceptance of death. More often, though, the passage looks like a demonstration of legato technique; this was the case on Monday, in a cast led by Hee Seo. A beautiful but impassive performer, Seo failed to fill the steps with any deeper meaning.

The character of Solor, her lover, is little more than a cardboard cutout, a cog in the machinery of the story. He exists to look handsome and proud, to partner with assurance, to leap with panache. On June 1 the part was danced by Kimin Kim, of the Mariinsky. Like Seo, he is lithe and elegant and strikes a handsome profile. His jumps and turns are astonishingly clean; he jets through the air with the force of a torpedo. But his acting, at least here, is mannered and his partnering somewhat labored. On June 5, Herman Cornejo gave the character more weight. He was convincingly impassioned in the first act and reacted to the news of his forced betrothal with touching bewilderment. His soaring jumps had urgency, purpose. The pas de deux between Nikiya and Solor during the Shades scene lit up the theatre.

There were other fine performances too, particularly on June 5: Roman Zhurbin as a heartbroken High Brahmin; Skylar Brandt, Stephanie Williams, and Cassandra Trenary in the tricky solos for the three lead Shades; Joseph Gorak as an impossibly exacting Bronze Idol. As Gamzatti, (June 5), Misty Copeland was appropriately icy and assured but had trouble getting much air in her jumps. On June 1, Gillian Murphy, in the same role, was grander and much, much meaner.

But no end of fine, or even inspired, performances can breathe life into this tired production. After watching a reimagined Sleeping Beauty just last week, with its wealth of newly-polished steps and mime and renewed sense of purpose, one can only long for a similar re-examination of La Bayadère. 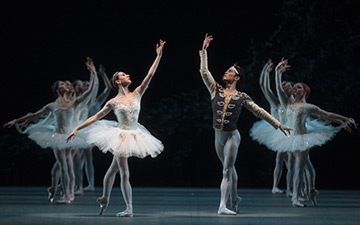