Like Swan Lake, Giselle is a centerpiece of the ballet repertoire; American Ballet Theatre performs it almost every spring season, for good reason. The company’s production is handsome and a bit shopworn, with sets by Gianni Quaranta that were originally designed for the 1987 film Dancers, starring Mikhail Baryshnikov, Alessandra Ferri, and a young Julie Kent. (Kent, who retired two years ago, just completed a very successful first season as director of the Washington Ballet, where she staged Giselle.)

There are no surprises here, so it stands to reason that the ballet has become a vehicle for débuts. This week included a whole host of them: Misty Copeland and Alban Lendorf on the 26th; Sarah Lane, Daniil Simkin, and Christine Shevchenko (as Myrta) at the matinée of the 27th; and Gillian Murphy later the same day. All had performed the ballet just once before, in Oman last month, so these were their New York débuts. I caught both the Copeland and Murphy performances.

Both evenings the Met was packed to the rafters. Copeland, perhaps the biggest star in American ballet at the moment, fills the theater at every performance. And Murphy’s début just happened to also mark the return of one of the company’s most beloved dancers, David Hallberg, after a two-year absence during which he painstakingly recovered from a serious and debilitating injury. Many thought he might never dance again. The ovation he received on his first entrance was enthusiastic and heartfelt.

Many of us can remember earlier Hallberg performances in Giselle, including a heart-stopping one with Alina Cojocaru in 2011, and another, perhaps even more electrifying, with Natalia Osipova in 2012. This was before he had become a huge sensation, joined the Bolshoi, and been seriously injured. It’s impossible to turn back the clock, but nevertheless it does the heart good to see him again on stage at the Metropolitan, looking fit and happy, those impossibly long legs and articulate, elegant feet proving that the human body is capable of creating shapes of pristine, almost abstract beauty. If his jump has lost some of its lightness, the articulation of the lower leg is still clear and crisp – as he proved in his 24 entrechats in act II – and his acting and partnering have grown more natural. He is a more complete artist now. I can’t wait to see him in Balanchine’s Mozartiana later in the season.

Both performances were happy occasions. Copeland proved, once again, that she is one of the most versatile and highly polished dancers in the company. Her Giselle offered no surprises in interpretation, but she uses her eyes and upper body with grace and intelligence, augmenting the beautiful line of her face, neck, and shoulders. Her first act Giselle was down to earth and relatable, her dancing musical and direct. In the mad scene, she was like a teenager experiencing her first heartache. “How can this be happening?” The second act was focused and lyrical. The first, super-fast turns in attitude, were a ghostly blur, but the slow developpés (unfoldings of the leg) weren’t yet completely smooth. Where she truly blossomed was in the pas de deux, in the expert hands of the Danish dancer Alban Lendorf. Here, again, the beauty of her upper body line came into full bloom.

Speaking of Lendorf: he has become the go-to partner of the season, and it’s clear why. His confidence, strength, and a kind of affability make him a great collaborator. In the big waltz in the first act, he tossed Copeland up into the air with enviable ease, magnifying the sense of joy in the lovers’ mutual discovery. His Albrecht was very direct, very centered, like that of an actor. In the famous second-act entrance, caped and carrying an armful of lilies, he didn’t chew the scenery, as many do, and simply walked, lost in thought and regret. It was extremely effective. And his dancing! He has the full package: beautiful, centered turns; soaring jumps that seem to linger at the apex, clean, sharp beats, and an impeccable sense of direction. Interestingly, though he has been a principal dancer at the Royal Danish Ballet since 2011, he had never danced Giselle before joining ABT.

Gillian Murphy is a similar case. She is an experienced ballerina and has been with the company for years (she joined in 1996), and yet has never taken on the role of Giselle with her home company. Perhaps, as a powerhouse dancer, she wasn’t considered the correct “type”; instead, she has danced the role of Myrta, queen of the Wilis. Her first shot at Giselle happened in New Zealand, when her then fiancé, now husband was the head of the national company. Perhaps that pushed the artistic director, Kevin McKenzie, to let her give it a go. Also, the fact that the company isn’t importing guest stars and is instead using the its own dancers may have figured into the equation.

In any case, though she may not be the classic waiflike Giselle, she is certainly not the first dancer outside of the mold to take on the role. There is a video at the New York Public Library, for example, of Violette Verdy’s Giselle, in which she performs with warmth and directness, without the usual sickly mannerisms. This was Murphy’s approach, too. In the first act, she was innocent and impulsive rather than mawkish, without concealing her strength: lovely soft jumps, super-fast turns, easy hops on pointe that one suspects could go on forever. The mad scene came as a surprise, a real unraveling, with her distorted neck position – and voluminous, gorgeous red hair – adding to the overall look of distress. Then, in the second act, she added a certain voluptuousness, as if death had released a gush of emotion. Her dancing, again, was strong, but what one noticed most was the way she melted into her partner, embracing him with what looked like real emotion. She made the character human. It’s too bad, though, that the pas de deux was accompanied by a truly out-of-tune string section. It was an off night for the orchestra.

These were satisfying all-around performances. The dances of the Wilis, in particular, had enormous poetry and a sense of breath. Both of the women who danced Myrta, Devon Teuscher on the 26th and Stella Abrera on the 27th, were authoritative, musical, and strong. Abrera’s interpretation exhibited more sadness and lightness – she was very much a spirit. Teuscher’s was grand, with imposing lines, a powerful back, and stitch-like bourrées. The unfortunate Hilarion, Giselle’s rejected admirer, was played with subtlety by Roman Zhurbin (26th) and Thomas Forster (27th). Forster was more angry and confused; Zhurbin more loving and protective.

Both evenings included perhaps the two best performances of the Peasant Pas de Deux of recent memory. Skylar Brandt, paired with Arron Scott one night (26th) and Joseph Gorak the next (27th) was light and sparkling, with sprightly jumps and crisp, clean phrase-endings. Brandt uses her face particularly well, angling it so that it catches the light and illuminates her large, expressive eyes. She looks like a dancer from another time.

You couldn’t help but wonder: could this be the company’s next Giselle? 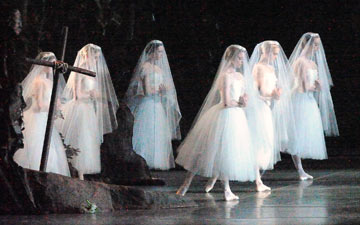 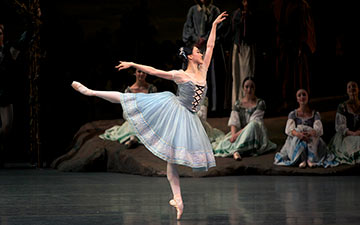