The silence around the horrific Spanish Flu pandemic in 1918 shrouds the highly contagious disease (carried by birds), in sinister and politically nuanced mystery. Infecting 500 million people world-wide and killing 50-100 million, the belligerent nations at war kept it out of the press in an attempt to protect morale. Thus the first cases were only reported in the non-fighting Spain. Overshadowed by the atrocities of WWI, which is commemorated loudly and frequently, the killer flu is at last fittingly acknowledged on its 100th anniversary in Shobana Jeyasingh’s work Contagion. With its terrifying visual and physically dramatic symptoms, which gripped the body of victims in spasms and deliriums, it is an inspired subject for a dance work. Jeyasingh creates powerfully visceral choreography, which coupled with film footage and portentous music, composed by Graeme Miller, really communicates the tragedy both effectively and affectively.

The intimate setting of the first-floor foyer at the British Library together with a personal audio experience for each member of the audience encourages us to relate personally to the moving testimonials in the narrative and the intense physical performances of the dancers. The voice of an Indian man describes how every member of his family were wiped out and buried in the Ganges and conveys his difficulty in coming to terms with how quickly and ruthlessly the disease had worked. As we listen to his tragic story, eight female dancers walk meditatively towards us through scattered rectangular boxes or gravestones on which grainy, archival film footage of soldiers and the sick is projected. A woman’s voice singing a children’s rhyme, hauntingly repeating the words “then in flu enza” accompanies a film of a headless child skipping on a screen. It’s an eerie spectacle while below the performers advance in formation, arching backwards then hunching forwards, as invisible germs attack their bodies.

The women rise and fall, appearing then disappearing behind the boxes in restless sequences of motion. Their expressions are anxious as they look around furtively, wary of the invisible enemy about to possess their bodies. They use the boxes as surfaces to sit astride, fall from or balance on as they embody the different stages of the flu. Although the text describes the chilling symptoms such as drooping eyelids, intense throat pain, coughing up blood and discoloured skin, the physicalized imagery is so potent that we can almost empathetically feel the virus invading our own human cells.

Jeyasingh not only portrays the physical effects but also the psychological. In the final section which is captioned ‘cold delirium’ we hear stories about the victims’ comas and deliriums which forced their mouths open in grotesque grimaces. Phrases of choreographed convulsions hurl the dancers across the boxes, their faces contorted as they collapse or stagger in close proximity to the audience. It’s particularly disturbing. Demonic action gives way to a languid calm of the death scenes, as bodies recline in weakened states while a survivor’s chilling story tells of how owls filled the rooms of the dying and an ominous silence settled over the plagued village.

In Contagion Jeyasingh weaves together archival history, visual imagery, personal anecdote, fiction and sound to create a work that is endlessly riveting in its evocative portrayal of the Spanish flu’s weird yet fantastical effects.   Both choreographer and her impressive company of women should also be celebrated for highlighting the unsung heroines of the pandemic – the mothers, wives, sisters and nurses who cared for the ill; who healed many of the sick by diligent round-the-clock care and linseed poultices. Here too, as in the war commemorations, the importance of women must be emphasised. Also, this parallel event enables people who might feel less connected to the period of WWI because of its military associations find resonance in, and fresh understanding of, these dark times. 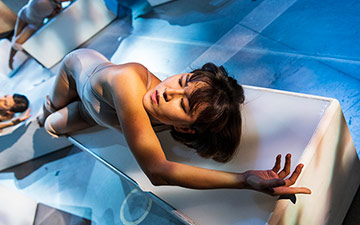