Shobana Jeyasingh has been celebrating her 25 years in dance during 2013 and this special anniversary is here marked by a double bill that presents works from the opposite ends of her dance company’s timeline. The opener, Configurations is again reprised (with new costumes and some slight tweaks) from 1988 whereas Strange Blooms was receiving a world premiere as Jeyasingh’s latest creation. One remarkable thing about her work is that it is impossible to judge – without prior knowledge – which of these works is the more modern.

The only reference that might place Configurations in the 1980s is the music of Michael Nyman, since this is largely the period of his rich seam of collaboration with the Film-maker, Peter Greenaway: Nyman’s String Quartet No 2 (the score for Configurations, composed around a rhythmic structure pre-established by the choreographer) was made in the same year as Drowning by Numbers (1988), which was a year before The Cook, the Thief, His Wife & Her Lover. But, like Jeyasingh’s choreography, Nyman’s music appears not to date and, if anything, an unknowing audience might easily regard this much earlier work to have been the more contemporary. The music is a part of that but there is also something significant in the combination of Nyman’s insistent, raucous rhythms and Jeyasingh’s classical Bharata Natyam movement that makes a pair of very odd bedfellows appear incredibly well suited. Since they were actually made for one another, the coupling achieves a very successful match that has stood the test of time (and a change of clothes).

Configurations has also undergone a gender change. Originally created for an all-female cast, it is now danced by a quartet in which Rathimalar Govindarajoo is the only woman and the impact of this new balance appears to give the work an even greater physical force. I hesitate to claim that it also makes it appear faster since the rhythmic patterns are entrenched within the music, which must be played at the same tempi as always, but it is certainly fast and unrelenting. It is also a piece where the swirling imagery of the dancers is painstakingly structured into patterns, occasionally emphasised by squares of light projected onto the stage. The marriage between Nyman’s movement and the classical language of Bharata Natyam is quickly joined by a third dominant partner in western contemporary dance expression and it is the exhilarating speed and freedom of this latter ingredient that expands and liberalises the work onto an even greater plane. This is also the blend that made the Jeyasingh brand.

It is impossible to measure what might constitute choreographic progress and foolish to even try. One can see a parallel between the first and the latest work in terms of the intense collaboration with a composer: where Nyman laid down a string quartet to Jeyasingh’s rhythmic structure, Gabriel Prokofiev has torn apart and remixed a Couperin harpsichord composition from the 17th Century to create a deconstructed experience based on that original; digitising the baroque. To my mind, it suffered by comparison with Nyman’s work. I was also disappointed by back-projected animations behind the dancers, which were inconsistently applied and didn’t give anything like the vibrant impression shown in Chris Nash’s photos for the programme.

As the title suggests, Strange Blooms is inspired by plants, which brought to mind the inspirations of pond life on Merce Cunningham’s Pond Way (1998) but Jeyasingh’s choreography possesses nothing like the realism of Cunningham’s physical manifestation of nature studies. Eight dancers embody these strange blooms with occasional evidence of the botanical theme in arms that drift and curl like tendrils, bodies that wrap around each other like stems and changing group patterns as if spores are being blown away in the breeze. But these influences are subliminal and if I knew nothing of the title or the concept, I may have been hard put to make the botanical link.

However one can easily see the continuum of choreographic ideas from first to last. The classical Indian dance influences are much less obvious but nonetheless still there in deep pliés, arms extended through the finger tips, fast footwork and highly disciplined frames. But the movement is freer and the journey that had ended at the curtain call for Configurations seems to have been picked up at some much later point by Strange Blooms. Jeyasingh creates beautiful imagery and she is well served by a strong group of dancers who move with purpose and beauty, yet don’t – as a group – conform to any one small-size-fits-all image of a dance ensemble. They are refreshingly diverse in every sense, working together as such an excellent unit that it seems inappropriate to give anyone a special mention, just as we would not name individual blooms in the most gorgeous of bouquets.

While I found myself preferring the work that dates back 25 years (and there is nothing wrong with that since it is an acknowledged classic) there is much to admire and remember in both the choreography and the dancers’ performances in Strange Blooms. It is yet another + in a notable catalogue of memorable creations from Shobana Jeyasingh in the years between these two offerings. 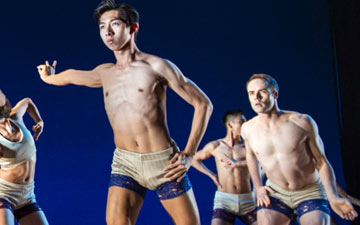 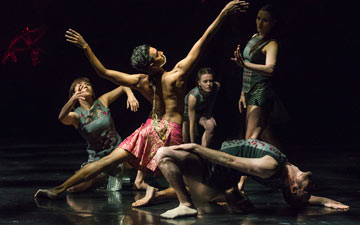