Contemporary dance pioneer Shobana Jeyasingh takes a bold, inspired step along her chosen route of exploring marginality and difference with this latest Royal Ballet commissioned work. As a dancer, she was trained in the classical Indian style of bharatanatyam, so she is well placed as a choreographer to confront Petipa’s lavish, problematic La Bayadere – his 1877, fantasy-India-set, full-length ballet, which manages to be both melodramatically ravishing and an overblown 19th-century slop bucket of every Western cliche about the ‘exotic Orient’.

A young male blogger (Sooraj Subramaniam) stands as Jeyasingh’s alter ego at the start of this hour-long piece, writing with some incredulity about seeing his first performance of La Bayadere. The recognisable ballet characters swirl around him as his words appear projected on a screen: tragic temple dancer Nikiya, her warrior lover Solor, scheming princess Gamzatti, the aya, the fakir. But their 19th-century Russian ballet moves melt away as our blogger, with a quick costume change, becomes the devadasi (temple dancer) at the centre of their attention.

Here, plunged into a Kingdom of the Shades of his own imagining, he is feted and feared by the shifting, languorously writhing corps of dancers, as the scene slowly morphs again, this time thanks to the words of French writer-critic Theophile Gautier spoken in hushed tones over Gabriel Prokofiev’s skittering, fractured score. Gautier wrote about seeing a group of Devadasis perform in Paris in 1838, when the raging Orientalist craze in Europe guaranteed they would be the objects of great curiosity. His gruesomely purple prose focuses on one dancer in particular, 18-year-old Amany, whose ‘coquettishly alien’ ‘Asiatic’ appearance he describes forensically. Meanwhile, Jeyasingh’s dancers play both the observed (the devadasis) and the observers, mingling classical Indian splayed fingers and precise feet placements with an increasingly violent-feeling framework of contemporary movement. The push-pull, love-hate confusion manifest in Gautier’s response to his encounter with The Other and the confused reactions a modern-day dance enthusiast may well have towards La Bayadere somehow fuse into a rather elegantly troubling puzzle.

And if the final abstract segment, where the dancers appear to be ‘freed’ into a more purely contemporary, intense movement space, is less gripping, it doesn’t diminish the fever-dream power of Jeyasingh’s thoughtfully constructed inquiry. 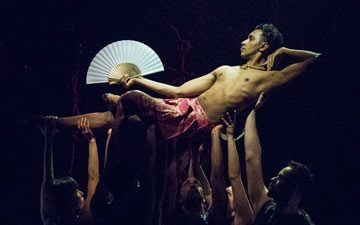