In the last few years, Anne Teresa De Keersmaeker’s Rosas company has brought work after work characterised by a radical, uncompromising plainness, in which the dance vocabulary feels ever-more restricted. The dancers – clad in drab clothes, wearing little or no stage makeup – are driven by momentum and gravity. They fall, their limbs buckling beneath them, and get up again, doing little to conceal their effort. They sweat. They pull and push against each other. Their knees and elbows get scuffed.

All this takes place in the context of great, and thrilling, music. A Bach Partita, the saxophone riffs of John Coltrane, the Brandenburgs. This time around, at the Baryshnikov Arts Center, it’s Arnold Schönberg’s ravishing Verklärte Nacht, or “transfigured night,” a forty minute sextet dripping with anguished, transporting romanticism, from 1899. The music rushes and heaves, and in the end, shimmers ecstatically, like the night sky. Schönberg wrote the music to evoke the words and emotions of a poem by Richard Dehmel, about a woman who walks with her lover in the woods, and imparts a secret: she is carrying another man’s child. “She walks on, stumbling,” the poem says, “she looks up; the moon keeps pace.”

The woman’s stumbling is the starting point for De Keersmaeker’s choreography, danced here by Cynthia Loemij (the woman). She falls, hitting the floor, hard, again and again. The work begins in silence, with Loemij standing behind Igor Shyshko, without touching him. She squats, her knees open, her underwear showing. Later, she returns with Bostman Antoncic, the man with whom she will, eventually, find some kind of intimacy and peace. But for a long time, he stands in the dark, with his back toward her. She stumbles toward and away from him, again and again.

The piece is strenuous, filled with running and partnering that, at first, verges on violent, and eventually turns rapturous, but never beautiful – De Keersmaeker never cedes to the lure of beauty, so powerfully manifested by the music. There is a discord between the passionate, cascading sound-world that fills the theater (the music is recorded) and the rough-hewn heaviness of the dancing. In fact, it’s barely dancing, more like a strange and painful ritual. What makes it potent is the honesty of the performances. This isn’t the ritual of pain one sees in Pina Bausch, heavily stylized, even coy; there is something terribly adult, and unvarnished, about De Keersmaeker’s dancers. None of them is young; they look like their backs and knees probably ache in the morning, but also like people who have lived, suffered losses, worked. Their dedication is all the more compelling for it. When Cynthia Loemij closes her eyes, she seems to go somewhere deep inside the music.

Does De Keersmaeker ask too much of her dancers, and of us? Does she give too little – too little dance material, too little choreography, too few movement ideas? Perhaps. In Verklärte Nacht, she pushes her radical simplicity to an extreme, leaving it to the music and her dancers to fill the void with their effort. It’s just about enough. 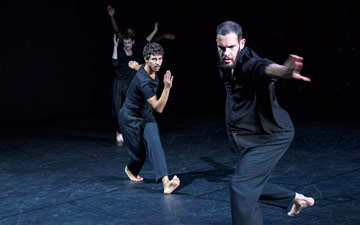