Sometimes a dramatic ballet comes along that captures the imagination of us all, audience and critics alike – a work that springs from another place, unharnessed from our normal expectations. Helen Pickett’s The Crucible is such a work, and Scottish Ballet has a major critical hit on their hands – it’s compelling 21st century watching where all the ingredients are top-notch, and it should be no surprise that the result is greater than the sum of the parts.

Arthur Miller’s totemic Crucible might have its roots in the Salem witch trials of the 1690s, brought to life as a comment on the McCarthy Communist witch hunts of 1950’s America, but it keeps being performed because it’s a tale of human nature – human nature and the terrible way we can band together and spiral down in the blind and brutal certainty of gut mistrust of what we don’t understand or believe in.

Miller’s story has many roles and plot lines, but the story revolves around three key characters: Elizabeth and John Proctor, and Abigail, their servant who has had an earlier affair with John. Pickett’s telling starts rapidly and within minutes of curtain up we see that sexual encounter (which the play doesn’t have) and the discovering of them mid-sex by Elizabeth. Abigail is dismissed although she continues to think John lusts for her, which he does not. With her young, impressionable female friends, Abigail and Tituba (a Barbadian slave) go into the forest, and a party descends into out-of-control naked dancing and voodoo-like curse making against Elizabeth Proctor. They are discovered by the local Reverend, and his daughter Betty collapses unconscious, as if taken over by devils. Betty is carried to the Meeting House and, while trying to revive her and find out what has happened, the huddle of girls involved, led by Abigail and fearing for themselves, start falsely accusing many in the community of witchcraft. And so the real hell begins – the trials and the ins and outs as people try to protect themselves and their loved ones from false accusations and admit, or not, to things they never did. Lives and reputations are on the line. And above all, the love and beliefs of the Proctors is cruelly tested. I’m not giving much away by saying it’s not a happy ending. If you want to know all the details of the play, then Wikipedia is your friend, though you can readily get away with reading the short-form synopsis in the programme, if you might miss the odd resonance. I saw the work twice and did some immersive reading between, and while I enjoyed it both times, my admiration was only enhanced with more context known and my four stars went to five.

The Crucible is a devilishly deep plot, and yet Pickett packs it into two 40-minute acts and graphically shows it all. The movement is contemporary and clear; ballet might be the base, but this is sharp, bold, incisive and instinctual as the turmoil of the mind is made physically manifest. At times it’s almost mime-like gesture rather than dance as such. It’s certainly movement that speaks openly and I particularly like the initial church/meeting house scenes as the community dance in bold gestures of happy certainty; and Scottish Ballet dancers certainly seize and animate their roles with committed conviction. Constance Devernay as Abigail has the juicy role of sexy manipulator and at the start, as she sets her cap at John Proctor, she is fizzing with hormones – he never stood a chance. Devernay is now dramatically at the top of her game and the company – just stunning. As the Proctors, Araminta Wraith and Nicholas Shoesmith (both soloists) carry much of the ballet’s dramatic weight across both acts with beautifully calibrated performances based around anger, love, forgiveness, bewilderment and many shades between. Indeed the best duet is for them as John tries to make amends for sleeping with Abigail and Elizabeth shows the deep pain of betrayal while slowly rekindling her love for him – profoundly moving and cause for some happiness in a ballet that can be so dark. Ballet Black’s Cira Robinson as Tituba also delivers dramatically, and the use of a black dancer in a black role adds thought-provoking authenticity. One just wishes it were a more prominent part. But the whole company rise to the dramatic plot as reverends, judges and members of the community, done-down or not. Everybody on stage has a deep backstory.

The designs (Emma Kingsbury and David Finn) are sparsely done with rooms defined by a roof that also becomes a crucifix and back wall in the Meeting House and the odd bench, table and chair. Much atmosphere also comes from the pools of moody lighting (David Finn), but the most striking non-dance element is Peter Salem’s score – played live by the Scottish Ballet orchestra and reinforced with found sounds – a bird flapping (a raven one fancies), a tolling bell and some electronic oppressive darkness. It’s deeply layered and is very tightly integrated into the work – at times the sounds and stage action sync to millisecond accuracy which adds breath-taking punch to what you see. It’s no surprise to learn that Salem first did a soundtrack to a National Theatre version of The Crucible back in 1990 – he is steeped in the plot, and it shows/hears.

Helen Pickett is also steeped in The Crucible and narrative ballet. It’s fitting that she has had such a happy return to Edinburgh since it is where many of us in the UK first saw her steps when she contributed two short pieces to Dance Odysseys, Scottish Ballet’s 4-day ballet extravaganza at the 2013 Festival where they presented 19 dance works in rapid succession. Back then it was her work that drew this enthusiastic response from me: “Pickett won me over with The Room in the first minute – probably one of the most intriguing dramatic starts to a piece I’ve seen in years and it really drew me in.” Inspired by Jean-Paul Sartre’s No Exit, it was only an 8-minute opening fragment, but it left you wanting much more. And the following year she produced a one-act version of The Crucible for Scottish. But at 40 minutes it proved a little too short for such dense, dramatic material, if it convinced Christopher Hampson (the Scottish Ballet Director) to go all-in on a new full-evening version. And all that thought and deep immersion in the story over the years has paid dividends – not just for the choreographer but the dancers who also carried some of that earlier Miller DNA in their limbs, ready for a bigger shot. But the company went further – last autumn they hired Glasgow’s Theatre Royal for a week to tech the whole work and gave three secret performances to friends of the company and regular ballet-goers. And after each show they asked for the audience’s thoughts and perceptions. And, of course, the company made sure time was available for Pickett to hone it all further. No wonder the Edinburgh Festival premiere was so sharp and well received.

So what are the takeaways here? Well obviously foremost is that The Crucible is a stunning piece of 21st-century dance that will stay with the company a long time – so don’t miss it. But perhaps as important is the approach of Pickett and Scottish Ballet to making the piece. It’s the result of much thought, reworking, rethinking, previewing, listening and sharpening by all involved. It was the premiere you want to see, but so very often don’t, with everybody, but everybody, at the top of their game and they should all be proud. 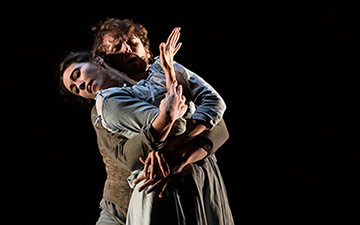 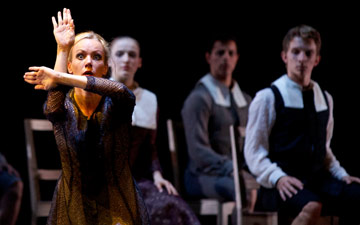 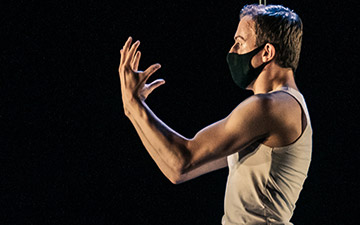