Dada Masilo’s Giselle is set in a swampy region of South Africa suggested by William Kentridge’s subtly evocative drawings.  Masilo and company unpack this famous story of a wronged woman, establishing a refreshingly black, South African and feminist perspective. It offers an alternative reading to the very white, European tale with its white tulle tutus, delicate choreography and stereotypical gendered behaviour. While Masilo’s version follows the narrative of the famous romantic ballet, there are some startling divergences: in act two, the Willis, a gender-fluid mix of terrifying male and female spirits show no mercy to Prince Albrecht and Giselle lashes him to death. Myrtha, Queen of the Willis is danced by a man – Llewellyn Mnguni and is portrayed as a traditional South African healer or Sangoma and Philip Miller’s dynamic music, while nodding to Adolphe Adam’s original score is fused with African percussion and voice which add a rumbustious and thrilling flavour to the work.

There are many other surprises along the way as well. The township folk are a gutsy, noisy group of mainly women each one generating enormous energy and charisma. There’s a lot of vocal banter as they prepare to meet the aristocrats, Albrecht (Lwando Dutyulwa) and his wife Bathilde (Liyabuya Gongo), particularly from Giselle’s mum, Sinazo Bokolo. She’s someone who enjoys a drink and performs a hilarious intoxicated solo in which she declares her love for her liquor. Masilo herself, as Giselle, is a unique dancer – don’t be fooled by her delicate, gamine looks for she powers across the stage with a ferocity and velocity that is almost humanly impossible.  The Willis/Spirits too are far from suffering, languid victims. Dressed in red velvet corsets and red layered skirts the message they stamp out with their strident choreography, as they rip up the stage, is that they are vicious.

While I’m tempted to draw comparisons with the Romantic ballet, this temptation fades as I’m seduced by the affect of Masilo’s version. Why the dancing makes such an impact is down to its fusion of classical, African contemporary and African dance traditions, namely that of Tswana from South African’s North Western Province.  Form-wise the choreography is an extraordinary mix which includes references to classical arm positions,  isolations of upper body to lower, stamping, hip gyrations and fast, sudden changes of direction. Bodies often move with a low centre of gravity but at incredible speed and the multiple ways in which the dancers articulate their bodies, and their unpredictability, make it a thrilling experience to watch.  Sounds and words, organically connected to the physicality, increase the expressive impact of the choreography and the combination of voice and movement allows each character to shape his or her own personality.

At the end of her mad scene, Giselle curls up on the ground as if communicating to her ancestors who spring from the earth rather than the ether. The statuesque and aloof Llewellyn Mnguni (as Myrtha) is an imposing sight as he glides across the stage, unfurling his extra-long limbs in huge extensions. His ambiguous androgyny seems so appropriate for the role of Myrtha, a character whose dramatic potential is usually undermined. A chilling apparition, he intimidates everyone in his presence, swishing his ominous shaman’s horse-tail stick.

As the story unfolds and Giselle avenges her betrayal, whipping Albrecht into oblivion I reflect on the feminist message of the work. Masilo’s portrayal of Giselle as a complex, fearless heroine and the other women who dominate both in numbers and personality seem to represent a self-sufficient matriarchal society.  But what is also important about the work is how it prompts questions about not just gender but also race and class. Masilo by addressing intersectional female oppression creates new and progressive meanings for Giselle. 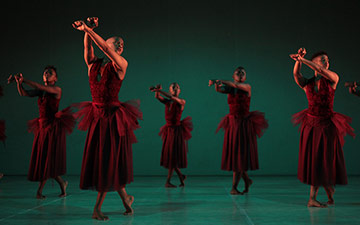 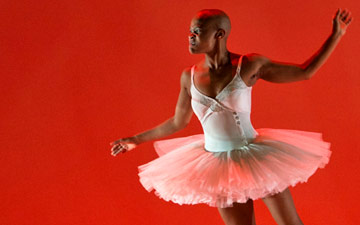