A young and lively audience is milling about in the bar at The Yard waiting for the show to start. Everyone outside, a voice shouts. It is raining. We huddle in a small covered area. The yard is cobbled, with a few parked cars amid the puddles. Suddenly a small car with the window blacked out roars into the space in reverse, a torrent of Belfast accented speech pours forth and then Oona Doherty is spat out of the boot to land on the cold wet cobbles and immediately spring up in defiance. This is the grittiest and most committed entrance of the year so far.

In her tracksuit and trainers, hands in pockets, she could just have stepped in off the street. She’s a tense, confrontational figure and stalks right into the crowd who part around her. The flow of speech continues at the same time as fluid moves that connect her with the ground. If you want a good view, you have to go out in the rain yourself. As in so much of the work that follows, Doherty shifts moods in an instant from the granite hard stare to an appealing warmth: a spectator gets a warm hug. The vocal soundtrack references God, Catholicism, men, anger. We are out here for five minutes or more before the car speeds away with revving engine and screeching brakes, and she yells in a tone that you wouldn’t dare disobey “get into the theatre!” She lifts her arms like a victorious boxer.

The Yard is a grungily chic converted industrial building in Hackney which provides an intimate 100 seat venue, where the performer is practically within touching distance. Doherty appears unceremoniously, taking off her trainers to leave them neatly at the front of the stage in gesture that is oddly domestic.

Hope Hunt & The Ascension Into Lazarus is a solo performance (well, apart from the car and its beer-swilling driver). Doherty is Dance Umbrella’s Featured Artist this year, and has already been seen in the well-received Hard to Be Soft: A Belfast Prayer at the Southbank Centre, and has curated an afternoon of dance films at the Barbican. There’s a sense that this is her time and that the unnerving accuracy of her particular take on both the working class male, his conflicts and contradictions, and her Belfast background is definitely hitting a nerve.

When the lights come up we see her at the back of the stage, trapped in a narrow corridor of light. Her style is very liquid and spiralling, very light on her feet. She begins to play with gestures and toys with playing air guitar. She morphs rapidly from persona to persona, sometimes with chanted text. She picks up and repeats a syllable or two and slowly modulates it, with the accompanying gesture becoming fuller and more extreme with each repetition.

So, she picks up the word Chelsea and plays with it, and rapidly we get a football fan, waving arms at us. Then she plays with the word further and Chelsea gradually changes to Alsatian, and the stroking of an imaginary big dog. It’s not so much impersonation as possession – the characters appear to take control of her body and fling it around. It’s not just confined to Belfast (though that’s where the piece returns to), but also features text in German and French. I particularly liked the Italian footballer giving us a commentary on his goals and launching into elaborately choreographed celebrations.

Doherty is a compelling performer, with a hard unyielding gaze that demands your attention. She has nailed the masculine walk and stance, the strutting confidence that masks anxiety, the fidgety anger. She really connects with the audience, scanning the rows intensely. Emotions pass over her face rapidly and legibly: the work really suits the intimacy of this small space. It’s not all confrontation: there are funny moments that induce giggles and some of her personas show real warmth and concern and not just nervous macho bluster.

There’s a further section where she sheds her navy blue tracksuit and puddle-stained top to leave her all in white, curled up on the floor. The soundtrack here becomes a blend of choral church music overlaid with snatched and indistinct Belfast voices in confrontational exchanges. I’m sure you would extract more nuances from this if you were a Belfast native: it is unsettling with occasional moments of attempted gentleness. It’s a more reflective section, but still drives her to fling herself down to the floor and spring up again, and again, troubled but defiant. Gravity always wins, but the urge to resist is strong.

The entire piece was about 40 minutes long and went by in a flash. Hope Hunt employs a good deal of repetition as a technique, but this reinforces its power, rather than being wearing, always adding a further nuance or twist. It was a charismatic and compelling performance and a forensic examination of embattled masculinity, holding the attention throughout with unflagging energy. The venue was full and the audience very receptive, leaping to their feet at the end.

It will be fascinating to see what Doherty does next and in what context. There must be an urge to take her work into larger venues and I hope its intensity and fierce focus can be maintained in a broader context. Whatever it is, I’d be keen to go to it and I’m sure we’ll be seeing much more from her. 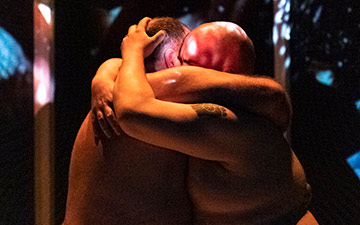 Oona Doherty – Hard to Be Soft: A Belfast Prayer – London 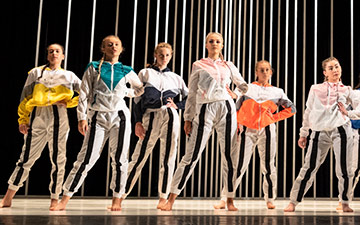 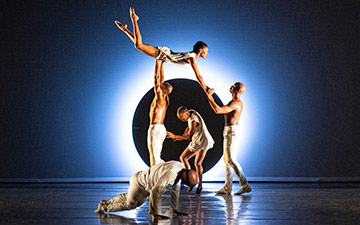