Birmingham Royal Ballet have been touring David Bintley and Galina Samsova’s production of Giselle, and now bring it to Sadler’s Wells at the end of its run.  It’s been a few years since it was last performed and the company seize hold of its opportunities for the delineation of character and pure classical dancing with joy and zest.  The duplicitous Count Albrecht declares his love to the trusting village girl Giselle while engaged to another, leading to her death and transformation into one of the band of the Wilis, ghostly spirits who dance errant men to death: thanks to her forgiveness he escapes this fate.  It’s a familiar and much performed story, with two very different modern interpretations previously at Sadler’s this autumn. BRB’s is a lavishly staged traditional ballet, and Bintley has included some idiosyncratic details. It is engaging, lively and involving with, at the London opening, exemplary performances from Momoko Hirata as Giselle and César Morales as Albrecht making for a richly rewarding and moving experience.

Hirata bursts onto the stage in Act 1 full of joy which translates itself into her light bounding jumps. She’s very fresh and delicate, a trusting and open-hearted creature, and we can see her every emotion. Her neat feet can deliver all the steps seemingly without effort. Even the hops on pointe looked easy, as if she’d just made them up that very minute as the natural outpouring of her happiness at being in love.  Anyone in the village would fall for this charm and Kit Holder’s sincere Hilarion clearly already has.

Morales’ Albrecht in Act 1 is initially very much the entitled aristo, rather enjoying dressing up as a peasant for a lark, and clearly not used to having anyone push back against him. He’s almost puzzled when Hilarion doesn’t back off immediately in their confrontation. His initial reluctance to dance in front of the corps when asked by Giselle soon softens, and after doing as she asks he becomes steadily less predatory, and more tender and caring.

Bintley is true to the traditional structure and storyline, but weaves in his own new details, some of which are still very much in keeping with the original spirit. At the opening we see Wilfred, Albrecht’s squire, paying a local for the use of Albrecht’s cottage, giving a sense of foreboding that Albrecht is up to no good. Young children in act 1, running about, serving the hunting party, reinforce the sense of a village community. Marion Tait is Berthe, Giselle’s protective and suspicious mother. Her sense of propriety is underlined by the way she takes her apron off immediately she sees the Duke, before she bows to him.

It’s a shame perhaps that Berthe’s mime which warns Giselle about the dangers of the Wilis, the spirits of young women dead before their wedding day who haunt the woods, is less detailed than in the Wright version for the Royal Ballet. Tait is so effective in conjuring up the chills. But only Giselle and Albrecht see this: its impact would have been amplified by the reaction of a crowd. Tait is terrific, every single gesture carries weight and meaning. Her reaction to her daughter’s announcement to the ducal hunting party that she’s engaged combines outrage, unease and mortification.

Bintley supplies a Harvest pas de deux in Act 1 for two villagers (Tzu-Chao Chu and Beatrice Parma) to celebrate the vintage. He has the flashier steps here with a good chance to show off his jumps, though the landings aren’t always as tidy as he might have liked.

Hirata’s reaction to the revealing of Albrecht’s real identity and his engagement to Bathilde is entirely believable. Her whole world has collapsed and she was initially almost blankly uncomprehending and her subsequent frenzy was that of someone trying to gather up the shattered pieces.  It was effective partly because it didn’t try to be: there was no affectation or melodrama just bone crushing despair. Just before her death she points out into the forest – does she sense the Wilis approaching already?

The production was originally created in 1999 with designs by Hayden Griffin. Most of these are wonderfully effective; in the first act we have a detailed medieval Rhineland village, with the vines growing on the hillside and a waterfall evoked in the distance. But there is the occasional lapse: the lurid costume for the Master of the Hunt almost induced giggles, like something from the dressing up box, and the white horse for Bathilde’s entrance is an unnecessary distraction. However, Griffin’s design for Act 2 redeems all, a stunning ruined gothic church where Giselle is buried in unhallowed ground. Everything comes together well here. Subtle lighting by Mark Jonathan provides atmospheric moonlight and finally dawn breaking through the crumbling windows. The same sympathetic care is demonstrated by the Royal Ballet Sinfonia, conducted by Koen Kessels, in their sensitive playing of the Adolphe Adam score.

Another touch from Bintley is to include Berthe desolate at her daughter’s graveside at the opening of Act 2 along with Hilarion. Left alone to grieve, he is soon disturbed by the sight of the Wilis. in a tribute to the practices of 19th century theatre, they flit through the air, flying on wires and zooming down dramatically from a great height.

Samara Downs is Myrthe, their leader, and her extended introductory solo is cool and controlled, before she launches into huge leaps. When she summons up her subjects they enter covered by long veils, almost to the ground which are retained for a few moments so we can appreciate the misty effect of the gauze in the moonlight. The corps look well drilled as they swirl and entrap their prey. To a woman they are unflinching in their refusal to contemplate mercy. Hilarion is despatched with chilling efficiency.

When released from the grave, Hirata launches into rapid spins with unstoppable force, unleashing the pent-up energy of the girl who loved to dance. The delicacy of her demeanour in Act 1 is sustained but now with a more ethereal and spiritual aura. Morales’ Albrecht really comes into his own in Act 2. He is a reliable and sympathetic partner, floating his weightless Giselle through the air. A real tenderness develops between them. Condemned by Downs’ icy queen to dance to death, he shows both stamina and finesse in his solos, particularly in a terrific series of entrechats, delivered with great style, while still remaining true to the character.  Albrecht is older, wearier and wiser now.

Bintley revises the ending. Giselle initially seems to return to the grave but at the final moment we see her floating up to heaven.  Her forgiveness and compassion has earned her salvation. But she leaves no token flower for Albrecht: he lies on her grave unconsoled, with no expression of transfiguration. It shifts the emphasis away from his fate to hers which you may not think is a bad thing; but it may not be the ending you expect. Giselle shows itself to be a remarkably robust work which stands up to all kinds of interpretation and variation. BRB shows us that the 19th century version from the choreography of Coralli, Perrot and Petipa, supplemented by Bintley’s, can still powerfully and movingly convey its themes of forgiveness and redemption.

Birmingham Royal Ballet are in an odd position at present. Their previous Artistic Director David Bintley departed at the end of last season, and the new AD, Carlos Acosta, does not arrive until January. It must be heartening for the company’s loyal following to see such a confident and accomplished performance at this time, and reassuring for the company to see it so warmly and enthusiastically received by the audience. 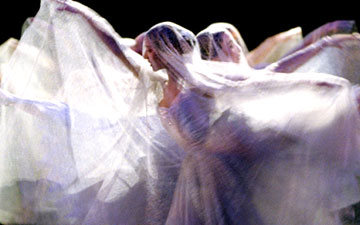