What an odd confection Rambert’s Aisha and Abhaya has turned out to be. The work has had a long gestation period from 2018: the number of creative talents credited is very long. The production includes film, some live dance, extensive use of dazzling projections, and thunderous specially composed music (ear plugs are handed out on the way in). There’s a lot packed in to the hour long work, and some of the components are individually very striking. The Rambert dancers on stage perform with great energy and commitment but the whole thing doesn’t manage to live up to its ambitious objectives: it is impressive rather than involving, and the elements often compete rather than cohering into a satisfying whole.

The director is Kibwe Tavares, choreography is by Sharon Eyal, assisted by Gai Behar. The soundtrack and music are from Ori Lichtik, with further music from GAIKA. There are extensive credits for the design and production of the visuals (Gillian Tan, Factory Fifteen). It’s obvious that an enormous amount of effort has been put into putting this piece together, and it is set for a substantial run of over twenty performances in the Royal Opera House Linbury. In the course of its creation, some things may to have morphed along the way. An earlier press release referenced sixteen dancers, but there are just seven (all excellent) on stage. The work was originally billed as a modern fairy tale: that is less evident in the finished article.

This was one of those occasions where I wish I hadn’t read the director’s programme note. Kibwe Tavares describes his idea of a story about two sisters, Aisha and Abhaya, refugees fleeing an imaginary country. Aisha means hope: Abhaya means fearless, and a contrast was intended between the two personalities as each cope with their predicament differently. Unfortunately, this doesn’t really come across with clarity in the theatre. The two sisters are more distinct in the filmed elements. But in the danced elements one of the “film” sisters does not appear, and there is no discernible attempt to delineate characters.

The work opens with a filmed section, with the two title characters crawling up a rocky beach and staggering ashore. Their costumes (design by Uldus Bakhtiozina) are highly elaborate and individual, with huge headdresses reminiscent of the Russian kokoshnik. One woman clutches a small wooden box, which opens to show a golden hologram of a tiny dancer, an intimation of effects to come. They move inland and find a ragged band dancing around a campfire, who take them in, and in the morning head off to the city together.

As they enter a long tunnel through the city wall, the action switches to live dance. There are projections on the curved back wall of the stage of a long dark corridor where the details repeat over and over. You run and run but still end up no further on. Of the seven dancers, three are women and four men, costumed in plain all in ones with odd ruffle details here and there. The movement is deliberate, heavily weighted, initially simple gestures repeated with a lot of unison, dancers with legs splayed as if ready for some combat. Sometimes Eyal assembles them in more sculptural groupings, but there no partnering as such. The men get more opportunities than the women to make an impression. The music pulses on. There’s no obvious narrative or link in the dance to the previous film.

Finally, we are through the door and into the city, with dazzling projections of semi abstracted city lights on the backdrop. Later the backdrop is peopled by images of the dancers, multiplied into the hundreds. These projections are really a dazzling achievement, deeply immersive (at least if you are in a central position) but the effect is to pull your attention away from the live performers in front of them who toil away through more effortful steps. Eyal certainly gives them a workout but the dancing is overpowered by the visuals rather than the two working together. A golden massive image of a dancer in the girls’ distinctive headdress radiates sparks as she twists and turns like giant firework, yet again eclipsing the dancers below.

There’s a further film flashback to Aisha and Abhaya’s home and the traumatic circumstances of their departure. But we never really end up feeling for them or identifying with them. You end up impressed at the effort that has gone into this work, pummelled into submission by the thunderous volume of the music, and dazzled by the scale and inventiveness of the projections and effects. But not touched or moved. The dancers earn respect for their unremitting effort and commitment, but the work as a whole fails to gel and is ultimately unsatisfying. 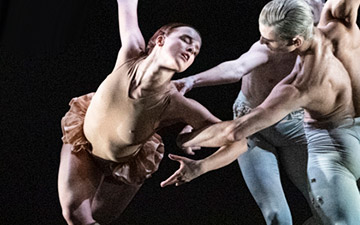 Gallery – Rambert in Aisha and Abhaya