The Sokolow Theatre/Dance Ensemble planned an April presentation of two dances by Anna Sokolow (1910-2000), the 1955 Rooms and 1970’s Magritte, a program they called Real + Surreal. Covid-19 made this impossible, but Artistic Director Samantha Géracht and Associate Artistic Directors, Eleanor Bunker and Lauren Naslund, all of whom began dancing Sokolow’s work when she was alive, devised a new online version of Rooms (Rooms2020), rehearsing eight scattered dancers over Zoom. They rethought and restaged it, gave instructions and directed camera angles, but the dancers had to not only costume and establish locations and lighting themselves, but video their own dancing.

The result, edited by Naslund, retains Sokolow’s intensely expressive choreography, which makes it a striking documentation of the aloneness, the alienation that can pervade this time of pandemic.

Though her work was varied and could be funny or lyrical, Sokolow was a master of tension and disturbance. Sharp, sometimes repetitive, intense movements, large – or subtle and small – suggest inner states of turmoil. The rooms are no longer individual’s chairs on a bare stage, but actual rooms the dancers live in, but the fierce, masterly choreography carries the piece online. It’s different, but it’s still a sometimes harrowing experience.

We see a well-made montage of New York City buildings and street scenes while the credits scroll (though this online version includes other places, including suburban locales), and then Rooms begins with a now familiar Zoom grid, each of the eight dancers sitting in their room, single people waiting in Alone. In a syncopated fashion they begin to carefully rise, fall over, spread legs, beat feet, sprawl over chairs in a complicated, dancerly way, until all are hanging over their chairs. They rise, beat legs again, move around their rooms, collapse on the floor and then sit still on the floor. Finally, each one is back in their chair. The different settings can, as usual these days, be distracting, but the sense of tension is established. In later segments the camera’s closeness and focus, coupled with the fact that each of us is alone as we watch, adds another layer of intimacy.

Sokolow’s vocabulary here is like no other and movements, like precisely pacing feet or stiffly reaching arms or legs or collapses of the upper body, occur in multiple places, but in different guises and forms. Because we see eight different rooms the changes in mood are reinforced by the different settings. But tension prevails. Kenyon Hopkins’ score amplifies such changes. It too is tense. It can be jazzy or more like chamber music. There are insistent, ominous rhythms and rushing flights that speed up dancers, moments of lyricism, and swift changes that suggest frantic changes of thought and mood, quick revelations and panics.

Samuel Humphreys is sitting in a book-lined room in Dreams. His head falls over and he falls to the floor. On a rug he scissors his legs. Now he’s in a very green park, sitting, rising, falling, cartwheeling. Though Dreams doesn’t always feel dream-like, the shifts between the room and the park suggest the way locales shift rapidly when we dream. Back in his apartment he faces a wall, collapses to the floor, face forward, struggles to rise, pushing his legs on the rug. Back in the park, jazzy music picks up as he spins, arms horizontal, hands flexed. He swings his legs in his room, runs and rolls on the grass of the park, rises from his rug, slowly turns and walks to carefully sit on the chair. These are unsettled Dreams.

In Escape Erin Gottwald sits on a sofa in a pale suburban-looking living room. The music is lyrical, but Gottwald’s moves are anxious, suggesting no escape. She reaches out stiff arms, rolls her head, flips the skirt of her polka dot dress, makes odd small shifts of her hips. She moves around the room, tries an armchair, goes to a door, re-arranges two chairs, sits on one, extends herself to the other, and rests herself between them. The sofa is her tense resting place.

There are shots of a tall, glassy skyscraper until we first see Brad Orego’s small apartment from a balcony in Going. Sitting on the floor, he makes small shakes of his arms, stiffly shakes his head, crosses his legs. Risen or on a chair, he makes frantic shifts of crossing feet. The brushes of a drum kit reinforce the mood of restless anxiety. He jumps in small explosions, rushes to his bathroom, his kitchen. His moves are exact as he shifts body or feet. He runs in place, boxes arms around, slides on the floor, rests his head on his chair seat and snaps his fingers.

Desire is a section for six dancers, Humphreys, Orego, Luis Gabriel Zaragoza, Sierra Powell, Ilana Ruth Cohen, and Erika Langmeyer. We see an empty chair, then a montage of each dancer entering a room. When the six are sitting, they pace their feet on the floor. Bodies shift and the movements are precise, but the unison is slightly ajar, which is intriguing. Alone on screen in their rooms, they roll on the floor, try to rise, and rock and rock. Images overlap briefly. The jagged grid of six returns. The vocabulary is exacting; there is nothing comforting about Desire.

Zaragoza is the oldest of the dancers and the longest with the company, and his Panic is a center of Rooms. His room has a wall of framed items, a television, shelves, a couch, and, of course, a chair. Sitting, standing, going back to the chair, slumping with head back, he is in such a panic that he goes outside to his hallway more than once. The walls are rough, shiny white, with a few doors at the end of the hall. To thumps of music, Zaragoza makes little thumps with his body, and with his head down, his arms outstretched, he makes a desperate rush. Back in his chair, he cycles his feet to quick music, but soon he’s back in the hall, before a door, head down. In a tense shift he makes little jumps, covers his face, shakes his head – and then we see him back in the apartment, despairing in his chair, or on his knees, or body bent, turning and turning, There’s a close up of his face before he collapses in fear. He arches back with his face toward us, thrashes his head down and hides under a table.

Daydream features Powell, Cohen, and Langmeyer. Though each enters alone, the three women are often side by side on the screen, with the edges merging, an effective way to show them dancing together though each is in her own room. To ominous music there is a shift between the rooms, though soon they are back to a unison of blended edges, as they reach out their arms and legs, heads bent to the side, or fall to their knees. There are shifts of body and individual moves and shots, but when they are again seen together, there is a sense of a trio that has built in Daydream – the calmest, if still unsettling, section.

A quick, very 2020 interlude, Street, has the dancers, masked, walking in city and suburban streets, with a railroad track in view, too. Each is alone, tension remains.

Margherita Tisato’s room seems like an artist’s garret, with a sloping ceiling. Tisato’s segment is The End?, and sitting, her head falls down, and her raised, curled up arms have hands that jitter. She flutters legs, covers her face, hops on a foot with the other leg stiffly out. Tisato clutches her throat, looks alarmed, puts her hands over her face. She staggers around, shakes her body stiffly, her head down, an arm out as she jiggles her fingers. She collapses to the floor, gets up, makes quick jumps before collapsing again, over her chair. Eventually she stands on the chair, pulsing her arms up. The End? is more a nightmare of anxiety than a final closing off. That question mark counts.

In the Coda we see shots of individuals until all eight are assembled. Each sits. The music is nervous. They are stuck, each in a different position, before they begin to move, each doing something of their own. There is lots of tension, with ominous, quickening music, until all are sitting quietly, but taut.

This has been a journey of about 45 minutes, full of a unique vocabulary of shifts and pacings and collapses that brings us close to inner states of discomfort. Sokolow Theatre/Dance Ensemble has re-imagined Sokolow’s Rooms for a pandemic era online presentation – and Rooms2020 works, because they’ve done it well – and Sokolow’s choreography is so inventive and strong. It will be on view until July 25. 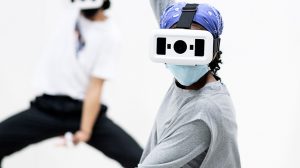 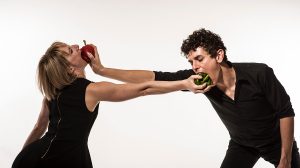 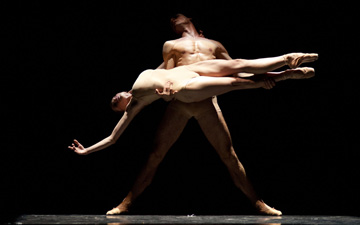 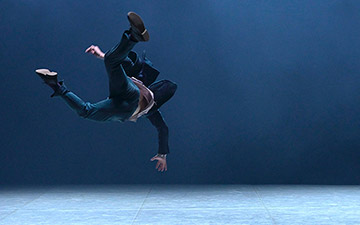