The news out of India is so terrible one hesitates even to read too much. And yet, despite the devastation, art continues to be made. This is the message of this year’s Dancing the Gods festival, presented by the World Music Institute and co-curated by Rajika Puri. For obvious reasons, the ten-year-old festival, each edition of which brings one or two respected classical Indian dancers to New York, is virtual this year. Both artists featured this year, Rama Vaidyanathan and Surupa Sen, were unable to travel. Even filming their dances was made difficult by the nation-wide lockdown.

The two programs, available at worldmusicinstitute.org through June 13, show two different styles of classical dance. In program One, Rama Vaidyanathan, a specialist in Bharatanatyam, interprets three songs about women reacting to the amorous behavior of a male god. In Program Two, Surupa Sen uses the language of Odissi to express the love between Radha and Krishna in three songs from the Gita Govinda. Both give ample space to the art of mime and storytelling, or abhinaya.

The two dancers are remarkably different. Vaidyanathan is an endlessly charming, playful, expressive actress. Her vignettes are like a masterclass in acting. In contrast, what captivates in Sen’s dancing is the way she gives over her entire body, and apparently her mind and soul as well, to interpreting the sensations transmitted by music: the sound of the voice, the rhythm, the melodic line.

One of the most vivid elements of Vaidyanathan’s performance is its extraordinary backdrop, the Mughal Emperor Humayun’s tomb, in Delhi. Vaidyanathan dances on a terrace in front of this vast, decorative, domed structure surrounded by arches. Beyond the structure, we see a bridge and the occasional car, a reminder that this truly is 2021. Inni Singh’s camera captures the subtleties of Vaidyanathan’s expression but also the vibrancy of the scene, the colors, the sky.

Her solos, Vexed, Nervous, Haughty, interpret three songs, one about a lover vexed by her beloved’s indiscretion, another about a vain woman who prefers to adorn herself than to go to her beloved, and, finally, a song about Radha anxiously awaiting a visit from Krishna. The most striking is the last, in which Vaidyanathan depicts the actual vibration of the sound of Krishna’s flute as it floats through the air and arrives at Radha’s ear, electrifying her body. The words (thankfully spelled out in subtitles) say “nectar-like melody flows from his lips when he plays the flute,” and we see those nectar-like notes, flowing through the air as Vaidyanathan mimes the flute-playing, the sound emerging from his lips, the vibrations, the trembling of Radha’s body. Classical abhinaya has this extraordinary ability to show us the subject and object of a sentence simultaneously, as well as its abstract form.

If watching Vaidyanathan is like hearing a story told by a master storyteller, then watching Sen is like traveling, through the music and the words, within the story itself. Her dancing is captured in three short films, one from a live performance, and two from her studio at Nrityagram, near Bangalore, where she is artistic director. The latter two films, captured on an iPhone by Lynne Fernandez, administrator and lighting designer at Nrityagram, are the most alive. Sen dances stories from the Gita Govinda, a 12th century ballad about the love between Krishna and Radha.

Sen’s dancing is fluid, connected, three-dimensional, characterized by a powerful through-the body impulse and intense concentration. This is both a general characteristic of Odissi, the style she practices, but also a characteristic of her own way of moving. Her body contains a deep wellspring of power. When she needs to cover ground, she does so, effortlessly, but her ability to pull the viewer inward in stillness is even more impressive. It is something she shares with Bijayini Satpathy, a former Nrityagram dancer who has recently embarked on her own solo career. And, perhaps even more than Satpathy, Sen responds to the music, and especially to the singing voice, as if she were inside that sound.

For me, the highlight of her performance is the third dance, Kuru Yadu Nandana, in which Radha, after making love to Krishna, asks him to embellish her, to “anoint her breasts with sandalwood paste and make beautiful designs of leaves and flowers.” Sen, as Radha, sits on the floor, in lotus position, peering at Krishna. Then, Sen becomes Krishna, gazing upon Radha indulgently and accepting her request. We see him pour water on paste, mix it, and then slowly, lovingly, apply the paint to Radha’s breasts with his fingers. We see all this, even though it is Sen who sits before us, fully dressed. Then, she is Radha again, in a state of bliss, resting her head against her arms. For a moment, we too are Radha, and Krishna, and the sandalwood paste, and the bower in which they sit.

Each program also contains a shorter dance film by a US-based dancer. Jin Won performs a short Kathak work, and Sonali Skandan, a short dance about the sun, based on the vocabulary of Bharatanatyam. Both use editing techniques, dissolves, superimposed images, outdoor and indoor shots. Inevitably these films feel a bit like filler here and might work better as part of a program of short dance films.

In the context of what is happening now in India, it seems especially miraculous that these recordings of Sen and Vaidyanathan were made, and that they arrive to us virtually, vibrant and alive, like messages in a bottle from the other side of the world. 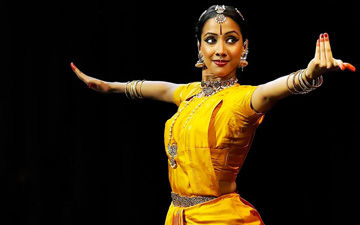 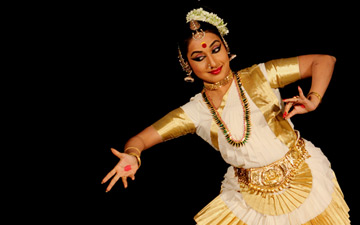 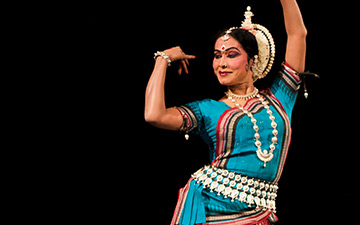 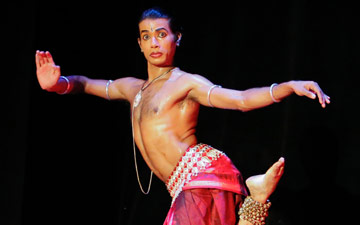 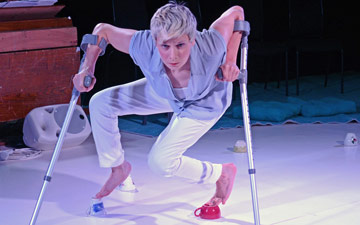