Program 3 on the third day of BAAND at Lincoln Center was an invigorating one. BAAND represents an unusual coming together of five major New York dance institutions – Alvin Ailey American Dance Theater, New York City Ballet, Dance Theatre of Harlem, Ballet Hispanico and American Ballet Theatre. The directors of all five have been talking together regularly

during the Covid-19 pandemic, and wanted to celebrate coming back to live dance together. Of course, that meant a feast of good dancing. This program (third) repeated three pieces from Program 2 the previous day (see Marina Harss’s review), but substituted Línea Recta, choreographed by Annabelle Lopez Ochoa for Ballet Hispánico for a piece by Justin Peck for New York City Ballet.

To start, Dance Theatre of Harlem danced New Bach, choreographed by Robert Garland. Like its Bach concerto music, New Bach is in turn ebullient, lyrical, ebullient again, and handsomely constructed. Lively Línea Recta followed, with American Ballet Theatre shifting to lyrical, folkloric-tinged ballet excerpts to live piano music from Alexei Ratmansky’s Songs of Bukovina, danced by Christine Shevchenko and Calvin Royal III. The rousing conclusion was none other than excerpts from Alvin Ailey’s Revelations – the Processional/Honor, Honor, Wade in the Water, and all the maximally exuberant closing Black church sequences.

Lopez Ochoa’s Línea Recta takes off from flamenco and decides to have fun with it. A woman in a ruffled red dress, but very short, also has a long tail – a kind of snake-like ruffled bata de cola that she can wave and wrap around herself and also wrap around a partner. Because partnering of a particularly acrobatic, upend the woman sort, is a hallmark of Línea Recta.

Throughout, the vocabulary of Línea Recta has repeated touches of flamenco (with curling hands, hip shifts, bits of footwork) these are just flavorings in a very contemporary dance landscape to flamenco guitar. The four men in the piece are bare-chested above high-waisted red pants. They link arms, lean forward and back. They play with the arched back flamenco stance, give each other fierce looks, climb on each other. It seems as if flamenco machismo is being toyed with and deconstructed.

Though there’s a lyrical solo for a woman, and the four women in their very short ruffled dresses do dance together, making flamenco suggestions as they move around, when they meet the men there is much of that high attack, pick her up and turn her over type partnering. The final sequence has lots of variations of this and it is climactic fun, though the wonderful canto hondo that we hear from a superb male singer has a flamenco duende that Línea Recta in its high-spirited, amusing take off, never in the slightest attempts.

A warm salute to Melissa Verdecia and Lyvan Verdecia, a couple who are both originally from Cuba and are departing Ballet Hispánico, was given at the end of Program 3 by Eduardo Vilaro, also born in Cuba, who was also the evening’s ebullient emcee. Both husband and wife danced notably in Línea Recta.

I kept being tantalized by Program 4 until I realized I just had to go. I was curious about Tiburones, the second piece by Annabelle Lopez Ochoa that Ballet Hispánico presented. And the three other dances, Jerome Robbins’ In the Night danced by New York City Ballet, Dianne McIntyre’s Change for Dance Theatre of Harlem, and Rennie Harris’s Lazarus for the Ailey company, I already knew and admired.

“I believe that a great new era of eclecticism is in the air” is one of the things we hear in Tiburones. The dance seems to take place at a film or video shoot – sometimes a dancer seems to be interrogated under a light, one wild-haired woman in particular. Verbal pretensions mix with different types of Latin music, suggesting a Puerto Rican entertainment world. One man seems to be a director. But this is a piece for the whole company, in Lopez Ochoa’s high energy, acrobatic style and it devolves into a purposefully chaotic melee in one climactic part. Lopez Ochoa’s big, bold, even brash approach and ironic commentary seems to suit Ballet Hispánico very well.

Jerome Robbins’ 1970 In the Night to Chopin nocturnes, played live by Elaine Chelton, is another world. Its three successive couples have different relationships, though all sweep around, filling a big stage, and high, complicated, sometimes overhead lifts connect with Tiburones despite their very different zeitgeists. In the Night is richly lyrical, like Chopin’s music, even when the last couple, Unity Phelan and Andrew Veyette, seem to be going through some troubles and part. Sterling Hyltin and Roman Mejia were the lovely first couple; Sara Mearns and Russell Janzen were the more dramatic second couple. It was so nice to see them all again.

A post shared by Dance Theatre of Harlem (@dancetheatreofharlem)

Dianne McIntyre’s Change has only three Dance Theatre of Harlem dancers – Amanda Smith, Lindsey Donnell, and Daphne Lee. Change seems to span eras, from spirituals to very insistent drumbeats as the three Black women, together, helping each other, or in expressive solos suggest, through expansive moves or subtle moments, that they are taking charge of their world. Words and music add to the transition from yearning and searching to mastery and boldness, as does a costume change from long dresses to patterned bodysuits. Toward the end of Change big drops of rain began to fall, though not too heavily, and the bulk of the audience stayed seated until the end.

Lazarus opened Program 1, but it’s a terrific closer and despite the rain it closed Program 4 with its fantastic array of movement invention. Rennie Harris derives much of his vocabulary from African American vernaculars like hiphop and house, but expands it for Ailey’s super dancers. Though I had retreated under distant trees during the rain, the invention and energy were still visible. Much of the multiple meanings suggested in the full-length Lazarus no longer come through, but as a display of powerful, intricate, innovative ways of moving, delivered with maximum Ailey company skill and force, it has a heartening impact. 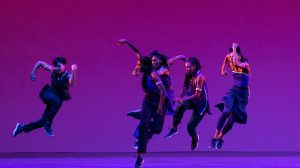 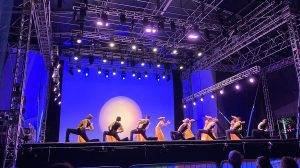