Most of you will already have read many reviews of English National Ballet’s latest premiere. Rather than do a usual review I thought I’d just drop out a series of rambling and unconnected thoughts that are best read listening to anything electronic and loud, ideally turned up a bunch to make the foundations shake…

Erina Takahashi is called Marie but seems to be the highest-paid Mrs Mop in London, endlessly cleaning the stage. A huge waste of a great dancer.

I don’t buy into any of the characters in Creature, or invest in them, because I have no real idea of what is happening much of the time – it all feels like a surreal ambling dream in which one man is simply ill-treated for 2 hours.

Jeffrey Cirio, as the Creature, gives a committed performance, probably one of the greatest in his career, but in a ballet few seem to appreciate or are moved by.

The one-piece costumes for the corps soldiers make them look like they have pissed themselves. Hold on to that vision – it will lighten the unremitting gloom.

If you like dance as cryptic crossword or enjoy PhD analysis of what is happening on stage, there may be something in Creature for you. Alternatively, you might take the view that the creative team just lost the plot and didn’t really think about the audience, most of whom are out for a night of entertainment.

Fabian Reimair’s Major seems to be a cross between the Gaoler from Manon and Darth Vader. He struts around and poses much. He talks at length and repeatedly to the Captain (Ken Saruhashi in a thankless role) but we know not why there are such lengthy exchanges. The Major does, though, rape Mrs Mop.

The creature and Mrs Mop have something of a love duet, but it doesn’t build to anything. Mrs Mop puts her feet in the metal cleaning bucket and is pushed around by the Creature. Love can be stupid, but this is daftness x 10. But there is talk that the ballet has something to say on climate change… perhaps the adventurous viewer might forge a link?

Some of the movement is gorgeously free-flowing and expansive. As abstract movement it can deeply impress and the corps shimmers almost like a shoal of fish. The Creature suffers the most beautiful, contorted pain. Again, and again and again and again – too much so its power wanes. There is little light and shade here.

Yes, there are elements of Woyzeck and Frankenstein but hard to see any clear narrative – just an hour and 50 minutes of unhappiness for the Creature and perhaps 10 mins of confused playing with Mrs Mop. That and a lot of roaring.

The music and soundscape are rather like the stage action – oppressive and samey. Like the score of Khan’s Giselle it often builds up over minutes to some thunderous level and sometimes it stays thunderous and sometimes it does not. The base electronic thrum shakes the Wells seating, but it was not painful – I suspect they have dialled it down following the initial complaints.

Akram Khan and ENB will bounce back, but it’s been a long time since I saw such a clunker of a work on a major company. Onwards and upwards because ballet and dance does need to find new ways of telling stories and making points. 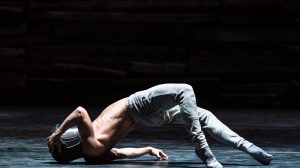