What seemed impossible six months ago has come to pass. Fall for Dance, New York’s yearly celebration of all things dance, presented five programs over twelve days, each offering a glimpse of three different companies (and in one instance, four). The two performances I saw looked sold-out. Everyone wore their mask, and everyone seemed to be having a good time.

Even so, it was a somewhat reduced version of the festival. There were three rather than four offerings per night, no intermission, and most of the companies and dancers were local. These are all reasonable adjustments to Covid times. The fifth program, which I attended on the 24th, revealed a close connection between this festival and the Vail Dance Festival, led by Damian Woetzel. One piece, Alexei Ratmansky’s Fandango, was co-presented by Vail, and another, Justin Peck’s Bloom, was a co-commission. Both were accompanied onstage by the music ensemble Brooklyn Rider, Vail favorites. But the final work of the program was a purely Fall for Dance commission, as well as a world premiere: Ayodele Casel’s tap suite Where We Dwell. It provided a joyful closing to the festival.

The two short works that preceded it, Fandango and Bloom are based in the vocabulary of ballet, or, in the case of Fandango, of balleticized Spanish dance. Roman Mejía, who danced Fandango, is the third New York City Ballet dancer to take on the solo, which was originally created for Wendy Whelan, in 2010, and was then adapted for Sara Mearns. Both women danced it on pointe. Wendy’s interpretation was sophisticated; Mearns’s explosive. But in Mejía it may have found its ideal interpreter, a young virtuoso with easy bravura and charisma to burn. The technique runs the gamut from delicate toe taps to big jumps and turns that accelerate and decelerate with great control. There is much emphasis on the hands, held overhead or behind the back, fingers splayed in the Spanish style, or revolving around each other to emphasize a trill. In a way, the dance is like a theme and variations, set to a repeating melody for the guitar (Alberta Khoury), castanets (Dario Natarelli), and strings, by Luigi Boccherini. The melody repeats, but the dance keeps evolving, a new idea for every phrase.

Bloom is a pas de deux by Justin Peck for two more virtuosos, Tiler Peck (of New York City Ballet) and Herman Cornejo (of American Ballet Theatre). The music, by Caroline Shaw, references the Tchaikovsky music used by George Balanchine for his Tchaikovsky pas de Deux. Peck gamely includes some references to that famous showpiece in his own choreography. But besides that, the piece is like a compendium of Justin Peck-isms: the low lifts, the spinning, the constant changing of directions, the slow, opulent movements followed by fast, sharp ones. Peck throws in some bravura flourishes for his two dancers: fouetté turns for her, turns à la seconde for him. Peck and Cornejo polished them off with total assuredness and flair. Each danced happily, alone and together, but there was little chemistry between them. In the end, like many of his pas de deux, it felt like an accumulation of steps, with no focus. And unlike the Tchaikovsky, Shaw’s music is often inconclusive; the audience was never quite sure when to applaud.

As a closer, Ayodele Casel’s Where We Dwell had everything: warmth, exuberance, great music performed by the singer Crystal Monee Hall and her band, and eight top-notch tap dancers, including Casel herself. The suite started off as a trio for Casel, Naomi Funaki, and John Manzari. The three of them seemed to be engaged in a busy conversation, creating rhythmic counterpoint to each other’s phrases. Manzari has the quality, always surprising in very tall dancers, of moving with great speed and agility. He jumped over his own feet and tapped with his heel and the side of his foot. Funaki responded with flurries of notes. Casel listened to both, and then veered off into her own rhythmic explorations.

Hall’s voice was smooth and gleaming; it seemed to envelop the dancers and everyone else onstage. At one point, Casel sat on a stool and listened to her singing, tapping quietly in response to the vocal line. The spirit was convivial, inviting, with moments of seriousness, as when the mixed cast-members lifted a fist as Hall sang an ardent rendition of “This Land is Your Land.”

Tap is a great American art form that for many years did not receive the attention it deserved. Its re-blossoming has been one of the great pleasures of the last two decades. Artists like Casel and Dormeshia Sumbry-Edwards and Jared Grimes and Michelle Dorrance have continued to feed and expand the form, each imbuing it with new sounds, new reverberations. Where We Dwell is just the latest example – a good way to end things. 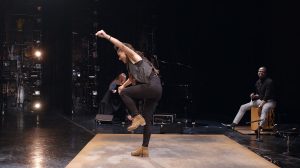