This year’s Ensemble Productions gala was ostensibly in honour of Anna Pavlova, a hundred years after she bought Ivy House in north London as her home base. There are to be further celebrations at Ivy House (9-24 June) as well as ‘An Intimate Evening with Anna Pavlova’ in the Linbury Studio Theatre on 17 June, with some of her solos danced by members of the Royal Ballet. But the party pieces performed by the international roster of étoiles in Sunday’s Russian Ballet Icons gala turned out to have had little to do with her.

Ten fairly familiar pas de deux, interspersed with an eccentric choice of four solos, were presented – where appropriate – in front of projections of film and photos of Pavlova. (Designs by Nina Kobashvili, artistic direction by Wayne Eagling, English National Ballet’s orchestra conducted by Valery Ovsyanikov). It’s doubtful whether Pavlova would have recognised the way the excerpts from ballets she knew are danced now, or what she might have made of modern choreography. Fortunately, there were only two real stinkers – of which more later.

The ballerinas who made the greatest impact were Uliana Lopatkina and Tamara Rojo: regal, gracious, seemingly effortless. Lopatkina danced a deceptively simple solo in the first half, making it memorable: Kasian Goleizovsky’s choreography for the Russian dance, Russkaya, performed in some productions of Swan Lake Act III. Lopatkina (who also danced the solo in the Icons gala celebrating Nureyev in 2010) wore an ornate headdress and long flowing dress similar to Pavlova’s Russkaya outfit. There are no virtuoso steps in Goloezovsky’s balletic version of a graceful folk dance, which Lopatkina performed with the kind of charm and grandeur Pavlova must have had.

Dressed in a copy of one of Pavlova’s tutus, Lopatkina ended the second half in a John Neumeier duet depicting Pavlova in class with Enrico Cecchetti. Marat Shemiunov (from the Mikhailovsky Ballet) instructed and promenaded her, to Tchaikovsky’s lovely entr’acte violin solo from The Sleeping Beauty. She curtsied to him in a révérence of respect at the finish – a fitting tribute performed by every ballerina, however famous, to her teacher.

Rojo’s solo in the first half was an odd one. Life is a Dream was created for her by Fei Bo, resident choreographer of the National Ballet of China, to music by Wu Na for the guqin, a traditional Chinese seven-stringed instrument. Seated cross-legged, Rojo contemplated a goldfish in a bowl on an otherwise bare stage. She flickered her fingers, stretched her toes and gradually unfurled her limbs; the fish flinched as she approached its bowl. Rojo’s mind was presumably being as flexible as her body as she pondered (according to the programme note) whether she or the fish were in each other’s dreams. She ended up lying rigid, mouth open wide, a fish out of water: a cross-species hommage to Pavlova dying as a swan?

Rojo’s less enigmatic choice of gala fare was the last act pas de deux from Raymonda, with Sergei Polunin as her partner. She was very much the noble princess-bride, luxuriating in the adagio sections, then speeding up as fast as the conductor would allow. Her fouettés were spun as reliably as ever, her pirouettes so poised that Polunin dutifully kept his hands off her till the last moment. He controlled his own turns wonderfully slowly and let rip in exuberant leaps, to the audience’s delight. Let’s hope he values his gifts highly enough not to become merely a gala dazzler.

Classical ballet extracts are more technically demanding than modern creations because of the precision involved – and they don’t always work out of context. Raymonda is fine as a display number, as is Gulnara’s duet from Le Corsaire, but Giselle and Odette do need a corps de ballet. Nikiya’s death-by-asp solo from La Bayadère makes little sense without Solor and the Rajah’s court to witness it or the snake to bite her. Evgenia Obraztsova (now with the Bolshoi) executed the contrasting moods of the reproachful solo in beautiful isolation. Two Bolshoi soloists, Anastasia Stashkevich and Viacheslav Lopatin, were accomplished in the Corsaire Act I pas de deux that opened the gala on a high note. But my heart sank during the Giselle Act II extract, in which Alina Somova (Mariinsky) appeared over-extravagant and David Makhateli (ex Royal Ballet) under par. Her huge extensions and lavish backbends distorted the choreography and the music’s tempi, while he barely exerted enough energy to justify feigning Albrecht’s exhaustion. Pavlova’s portrait as Giselle, projected on the backdrop, looked down on a travesty of Romantic style.

Myriam Ould-Braham from the Paris Opera Ballet was clean and pure as Odette, a role not in her POB repertoire. An ill-advised headdress made her head look too large for her proportions. While her restraint was admirable, she couldn’t bear comparison with  memories of Lopatkina’s other-wordly Swan Queen. Alessio Carbone supported her gallantly as Siegfried, without being able to show his dancing prowess.

Five twentieth century duets revealed how very differently partnering has become from nineteenth century formality. Any part of the woman’s body can be gripped, levered or exposed. Daria Klimentova and Vadim Muntagirov were happily ecstatic in the Act I bedroom pas de deux from MacMillan’s Manon; Iana Salenko and Marian Walter, a married couple from the Berlin State Ballet, encapsulated young love in the balcony pas de deux from Cranko’s Romeo and Juliet. (What an asset he would be to the Royal Ballet). Alina Cojocaru conjured up the doomed love affair of La Dame aux Camélias in John Neumeier’s swooping, tumbling duet, with Alexandre Riabko (Hamburg Ballet) as her puppyish Armand.

Svetlana Zakaharova took the easy option of a Nacho Duato duet, Cor Perdut, originally made for NDT2. It’s one of those Kylian-type numbers in which the woman swirls emotionally in a long skirt, cast down on the floor or swung high by her partner (Andrey Merkuriev from the Mariinsky Ballet). Zakharova danced it so magnificently that you watched her rather than the easy-on-the-eye choreography. A pas de deux from Roland Petit’s Proust ballet, Les intermittences du coeur, danced by Lucia Lacarra and her (second) husband, Marlon Dino, was tantalising without its context. In La prisonnière, a youthful Proust is spying on Albertine as she sleeps, indicated by a silken banner that descends to cover the ballerina at the conclusion. Is she dreaming him or he fantasising her – the goldfish conundrum? The man’s role is subservient in manipulative choreography that veers between banalities and original, ludicrous manoeuvres.

The prize for the most preposterous use of fabric had to go to Jessica Lang’s ambitiously titled Splendid Isolation III, performed by Irina Dvorovenko and Maxim Beloserkovsky from ABT. An all-purpose display piece set to the syrupy adagietto from Mahler’s Fifth Symphony, it can be adapted for a number of performers. In version no. 3, it features a woman, a dress and a skimpily clad man. He can’t reach her on account of the size of her skirt, which covers most of the stage. He tries burrowing under it but gets caught in its swathes; he and she fling it about fiercely or co-operatively. It’s symbolic of their relationship, don’t you see. She sheds her cocoon with some difficulty and they die together – or possibly not. It had more to do with Loïe Fuller than Anna Pavlova.

But at least it provided more entertainment than the other stinker, a solo for Giuseppe Picone by Michele Merola, who runs his own MM company in Reggio Emilia. Compassione, to music by Mozart, had Picone emoting for seven long minutes. He’s a likeable dancer who has passed through many companies, including ENB and the Royal Ballet; but in this formless ‘contemporary’ choreography he could, and did, abandon any attempt at rigour. As Eric Taub has warned, beware of any solo that begins with a male dancer in an overhead spotlight and a bare (or semi-nude) torso.

A follow-spot lingered ominously on the empty stage as Saint-Saëns’ music evoked the Dying Swan in the closing moments of the gala. Mercifully, no feathered tutu and bourré-ing legs appeared to emulate Pavlova’s legendary solo. Instead, photographic images of other dancers in the role were illuminated on the backdrop to blot out irreverent recollections of the Trocks (and for Edward Gorey fans, Maudie Splaytoes in The Gilded Bat). Those members of the audience due at the gala dinner talked over the music as they gathered their belongings, ready for the exit as the dancers took their bows. 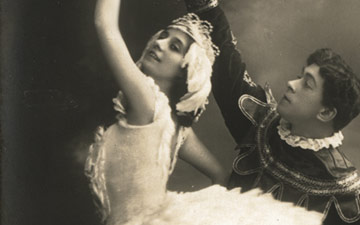