This was the eighth annual gala paying tribute to ‘legendary dancers who made Russia proud of its rich cultural heritage’, in the words of the organiser, Olga Balakleets, director of Ensemble Productions. Though this year it was Nijinsky’s turn to be reclaimed as a Russian icon, the contents of the gala had little to do with him. Very probably the choice of items – mainly pas de deux – depended on which dancers were available to perform whatever was in their repertoire.

Wayne Eagling, as artistic director, made an acceptable programme out of  what he got on the Sunday night. Among those advertised who didn’t show were Inaki Urlezaga, Svetlana Zakharova, Igor Zelensky and Sergei Polunin. Four principal dancers came from the Bolshoi, one from the Mariinsky. Two Russian visitors are now with the Vienna State Ballet. Other dancers were from the Royal Ballet, English National Ballet and the Royal Danish Ballet. All were efficiently presented in stage designs by Nina Kobiashvili, using projected images or simple backdrops.

English National Ballet supplied the orchestra, ably conducted by Valery Ovsyanikov. ENB dancers appeared in Le Spectre de la Rose and excerpts from Petrushka and Schéhérazade. Whether they were executing Michel Fokine’s choreography for Nijinsky is open to doubt. Ivan Putrov was the Spectre, dancing the role rather less admirably than in the past, with Elena Glurdjidze as the dreaming girl. She, Dmitri Gruzdyev and Fernanda Oliveira performed Eagling’s recent version of Nijinsky’s 1913 Jeux, which refers to images of the original without pretending to be authentic.

One of the oddities in the gala was a piece entitled Narcissus, to Debussy’s music for L’après-midi d’un faune. It featured Giuseppe Picone in an unfortunate mankini brandishing a pole as a support for his arabesques penchées. He encountered a veiled female in a frilly bikini – Marianna Ryzhkina from the Bolshoi, who deserved better than this travesty. Maria Grazia Garofolui’s garrulous choreography proved, if proof were needed, that Nijinsky’s spare approach to the shimmering music was a mark of  genius.

Another bizarre choice was a duet by John Neumeier from his 1983 ballet Bach Suite No.3. It had nothing to do with Nijinsky, though Neumeier is a devotee. Piously performed by Maria Yakovleva and Kirill Kurlaev from the Vienna State Ballet, the ‘Adagio’ involved such distortions of classical ballet technique as a slow-motion headstand by the bulky man, supported by his small, compliant partner. The two of them fared better in Asaf Messerer’s corny Moszkowski Waltz, with its show-off lifts.

They were outshone, though, by J’aime Crandall and Alban Lendorf, both from the Royal Danish Ballet, in Balanchine’s scintillating Tchaikovsky Pas de Deux. Lendorf’s bouncy pliancy more than compensated for Crandall’s brittleness: she’s not a charmer.

Balanchine’s ‘Diamonds’ pas de deux from Jewels was grandly danced by two Russian visitors: Evgenia Obraztsova (Mariinsky, now Bolshoi and Stanislavsky Ballets) and Artem Ovcharenko from the Bolshoi. They elegantly embodied the conceit that the ballerina is a vision who needs an adoring man to complement her: she yields to his courteous strength as if unable to exist without him.

Ekaterina Krysanova (Bolshoi) was a more forceful vision as Aspicia in a pas de deux from Pierre Lacotte’s remake of Petipa’s The Pharaoh’s Daughter. Though the choreography may be pastiche Petipa, Krysanova and her partner, Dmitri Gudanov (also Bolshoi), performed it with engaging brio. Gudanov also partnered Marianna Ryzhkina in the pas de deux from Les Sylphides, enabling us to admire their Romantic style and beautifully trained feet.

The Royal Ballet dancers’ contributions to the gala had no connection at all with Nijinsky, unless one supposes that their choreographers – Kenneth MacMillan, Kim Brandstrup and Wayne McGregor – were inspired by Nijinsky’s iconoclasm. Leanne Benjamin and Edward Watson gyrated effectively in their underwear in a duet from McGregor’s Qualia – his first work for the ROH stage in 2004. Alina Cojocaru and Thomas Whitehead conveyed conflicted emotions in a turbulent pas de deux from Brandstrup’s Rushes. Marianela Nunez and Thiago Soares danced the ‘Farewell’ pas de deux from MacMillan’s Winter Dreams with passionate abandon.

So, a very mixed bill indeed. Inevitably, pas de deux taken out of context for a gala make little sense to those who don’t know the full works, though it was notable how heartfelt the Rushes and ‘Farewell’ duets seemed. Applause for the soupily sentimental Bach ‘Adagio’ indicated that it headed audience favourites.  Whether those of the predominantly Russian audience members who were not balletomanes were enlightened about Nijinsky’s career and influence is dubious. Some were more interested in their mobile phones, others in posing for cameras; it’s always a joy to see bling on display. But the onstage quality of the dancing was beyond question. 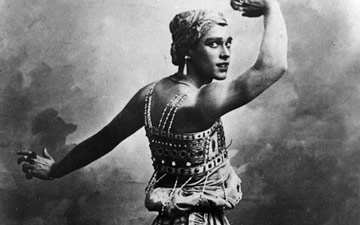