Balanchine famously described a choreographer’s job as being like a chef’s, and his  Ballo della Regina perfectly fulfils the role of amuse-bouche in the Royal Ballet’s latest double bill, waking us up and sharpening our appetites for the more serious fare of Bournonville’s lovely La Sylphide.  It’s the fourth ballet the company has tried out in this role and I think it’s the most successful. When we first saw it here last season it was overshadowed by the rest of the programme and it’s good to have another chance to appreciate its mildly dotty charm.

As then, the first night was danced by Marianela Nunez who skips through one of Balanchine’s most technically demanding roles as if it was just playing around – so much so that I can imagine that ballet newcomers could easily go away with no idea at all of the phenomenal strength and control it must take. Her partner last season was Sergei Polunin and I can’t pretend that his replacement, Nehemiah Kish, overwrote my memories of  Polunin’s brilliance and authority: Kish is a  much quieter, more reserved dancer and needs to find a way of using those qualities in the role rather than straining after a bravura he doesn’t have. Federico Bonelli, in the second cast, does exactly that, rather successfully; his partner,  Laura Morera – substituting for the the injured Lauren Cuthbertson – made a brave shot at this killer choreography but she hasn’t got that last degree of technical brilliance that it demands. The four tiny solos for the leading corps de ballet women look like heaven to dance and – to pick just one out of each cast – I particularly enjoyed watching Yuhui Choe and Itziar Mendizabal.

It’s five years since we last saw  La Sylphide – far too long, possibly because it seems to sell so badly. There are some details I don’t remember – did Effie always change into that startling white dress for her wedding? did we never see the traditional two little sylphlings guarding the Sylph’s head and feet as she floats heavenward on her bier? –  but overall Johan Kobborg’s production retains both its considerable virtues and the problems which have been evident from the start. I’m still not entirely won over by his choreographic additions – the pas de six for Effie’s friends, the little pas de deux for James and Effie, the extra detail added to the beginning of the scene in the forest glade. None of them tells us anything new about the characters, and the pas de six – pure give-the-corps-de-ballet-something-to-do padding – actually takes away some of the impact of the two big solos for Gurn and James, which in the traditional Danish production are the first academic dancing we see.

Of course the story is full of ambiguities, and most of them are happily left  for us to resolve rather than being spelt out for us;  Kobborg’s one attempt to impose a solution doesn’t really work. Like Nikolaj Hübbe, in the version currently danced by the Royal Danish ballet, he takes the line that the Sylph is entirely a product of James’s dreams and imagination and can therefore be ‘seen’ only by him. Hübbe takes the idea to its logical conclusion and changes Gurn’s mimed descriptions of what he sees (destroying much of their point); Kobborg changes nothing and I don’t see anything in the stage action to make me doubt that Gurn sees the Sylph several times over. (This may all seem a bit unimportant if you’re relatively new to the ballet but, believe me, these are merely the foothills of the arguments about what happens. Who is Madge? Why does James’s mother accept his disappearance so easily? What, exactly, kills the Sylph? Why was the poisoned scarf originally red rather than white? … and so on, and on,  long into the night.)

It was fascinating to see two such totally different couples in the leading roles in the opening performance. The first night went of course to Alina Cojocaru, partnered – to nobody’s surprise – by Steven McRae, making his eagerly anticipated debut as James. Cojocaru’s Sylph is much the same as she was when the production was new, only more so – more elusive, more mischievous – but, to her advantage, also perhaps a little less sweet. She has clearly thought out every detail and her dancing is perfectly in tune with her interpretation, light and swift, her changes of mood as fleeting as clouds blown across the sun. McRae too has obviously put a huge amount of thought and preparation into his interpretation, and by now we take his brilliant technique for almost for granted. I both admired and appreciated what both of these dancers were doing, but despite all their talent neither of them caught me up in their story and made me really care about them.

Perhaps it’s because I find a simpler approach to Bournonville works better for me, and that would certainly explain why I was far more moved by the second pairing, with Tamara Rojo as the Sylph and the very inexperienced Dawid Trzensimiech making his debut as James. Rojo’s Sylph is much darker than Cojocaru’s , with a mysterious, grown-up allure I found much more interesting. Nearing the end of her career, she’s long learnt the art of implying much whilst doing apparently little, and though she occasionally lets the effort of her dancing show, it’s not a serious problem.  Trzensimiech, on the other hand, is just starting out – he’s never done a big acting role before and his mime is diffident and stiff, in contrast to his confident and fluid dancing. I really admired the way he didn’t make any attempt to bluff his way through the role, just presenting himself as he is – a young man temporarily somewhat out of his depth in the situation (like James, in fact) but making us care about him through the sincerity and simplicity which take anyone a long way in Bournonville. I look forward to the next revival. 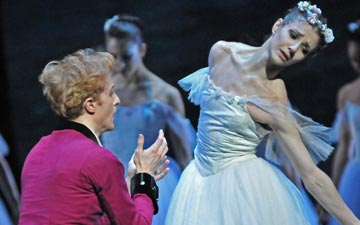 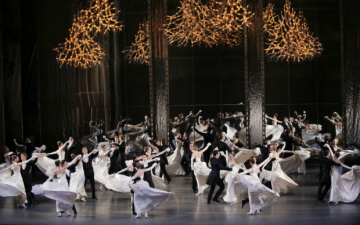 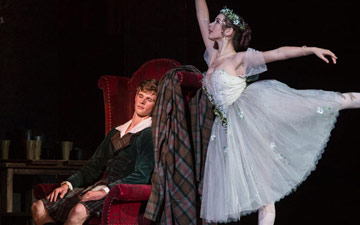 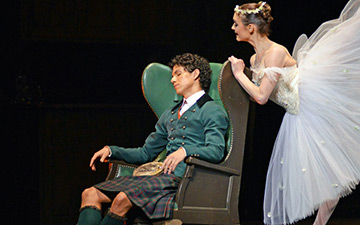