It has been barely a week since the Australian Ballet finished up with its whirlwind tour to New York City, where it performed to great fanfare (and mixed reviews) at Lincoln Center. However, it is back to business as usual for the company at home in Melbourne, with the dancers shedding the touring repertoire of Graeme Murphy, Wayne McGregor and Stephen Page in favour of the ball gowns and emotional angst of John Cranko’s Onegin (1965).

2012 marks the company’s 50th anniversary, with the year’s repertoire chosen for its historical significance and to showcase the diverse performance skills of the company. In their leaps from contemporary to traditional narrative ballets, from international icons to Australian repertoire, and from one side of the world to the other – the strain is starting to show. The company looks a little bit weary – and who could blame them?

Onegin has been part of the Australian Ballet repertoire since 1976, first introduced at the behest of Anne Woolliams, who worked with Cranko at the Stuttgart Ballet. Woolliams replaced Sir Robert Helpmann as artistic director of the Australian Ballet in 1976, a move that angered Helpmann amid an atmosphere of heightened tension between the administrative and creative wings of the company.  Woolliams resigned after less than a year in the job, but Onegin has remained a much-beloved part of the company’s history, and a particular highlight in the performance career of current artistic director, David McAllister.

Based on Alexander Pushkin’s 19th century novel, Eugene Onegin, Cranko’s Onegin tells the story of a Russian aristocrat with too much time and money on his hands, and with too little regard for the consequences of his wicked and unscrupulous behaviour. This iconic character – the ‘man in black’ – certainly fits a cultural stereotype, but Onegin has real complexities as a character. He is that dashing bad-boy Byronic hero, destined for some serious comeuppance for his thoughtless philandering and arrogance, and yet simultaneously an unwilling victim of his own social circumstances.

Onegin mockingly spurns the attention of Tatiana, a naïve young girl who has managed to manufacture a romantic relationship with him in her mind and dreams. To combat his increasing ennui, Onegin flirts with Tatiana’s sister, Olga, to the horror of Olga’s fiancée – and Onegin’s friend – Lensky. A glove is thrown, pistols are drawn, and we are provided with an introduction to the snare of societal expectation that entrap men of Onegin’s social status. Onegin cannot just ignore Lensky’s challenge: he is bound by the rules and constraints of his class to behave in a certain way – even if that means killing his friend.

With the death of Lensky and in the wake of Olga’s heartbroken collapse, Tatiana shrugs off both her girlhood innocence and her feelings for Onegin. Years later, when Onegin finally returns, Tatiana finds the strength to reject his romantic advances, refusing him redemption for the follies of his past. In the process, she shows herself to be made of much sterner stuff than other female ballet characters in a similar situation – think Giselle or Odette – and is all the more admirable for it.

Onegin is almost entirely driven by the four main characters, which means that casting for these key roles is critical.  Principal artist, Adam Bull, certainly has the right look for Onegin – imposingly tall, long-limbed and devastatingly handsome in his swirling black cloak. Like Bull, principal artist, Amber Scott, has the perfect physicality for her role. As Tatiana she is elegant, classically beautiful, and rendered small by Bull’s height.

However, this is a case where looking right for the part is not necessarily enough, particularly considering the emotional demands of Cranko’s work. On opening night neither Bull nor Scott demonstrate the acting range to do these characters justice. As Onegin Bull’s performance is more petulant surfer boy than dandified Russian aristocrat – even simple walking passages fail to capture Onegin’s entitled stalk or make clear why an idealistic young woman like Tatiana would fall for someone so devoid of charisma. In attempting to be aloof and bored, Bull appears disengaged and disinterested, creating a general muddying of Onegin’s motivations.

As a performer Scott has always been somewhat restrained and careful, excelling in variations that require technical proficiency rather than acting ability. What translates beautifully when captured in a photograph (and Scott is often the poster-woman for the Ballet’s various ad campaigns) is a little too subtle onstage to anchor this ballet. She needs to find a way to project the range of Tatiana’s emotions in partnership with her exemplary classical ballet technique.

Chalk it up to nerves, jet lag or the difficulty of the movement sequences – Bull and Scott’s Act I performances – both in the garden and in Tatiana’s bedroom – are awkward and roughshod, with the dancers seeming to be chasing the downbeat from lift to lift. The overall feeling is less passionate than frantic, hampered by a manifest absence of chemistry between the two dancers.

The sluggishness is not limited to the two leads: the corps de ballet also doesn’t seem to be their usual, effervescent selves during the opening-night performance. A lack of unison during the group scenes is noticeable, particularly during a diagonal run of grand jetés in which every dancer hits the apex of her leap at a slightly different time.

Fortunately, Scott’s performance markedly improves in the final act, beginning with her duet with Prince Gremin. As the open, dependable and constant Prince, Brett Simon is excellent, drawing out something deeper in Scott’s performance that she is unable to find in her work with Bull.

Leanne Stojmenov as Olga and Kevin Jackson as Lensky are equally brilliant.  Stojmenov is often cast as the giggling girlfriend or coquettish flirt – always the sidekick, rarely the princess. This is an oversight, as Stojmenov’s lighting-fast footwork and ability to project the nuances of character past the footlights are rare skills in this company.

As she flirts outrageously with Onegin, Olga seems to relish Lensky’s jealousy. Stojmenov plays up to this dynamic by coquettishly hanging off Onegin’s arm and grinning cheekily at an increasingly irate Lensky.  Jackson’s Act II solo, as Lensky prepares to duel with Onegin, is the highlight of the entire production. In the way Lensky brushes past the objections of Tatiana and Olga and transverses solemnly downstage, we see both the sophistication of Cranko’s choreography and Jackson’s complete understanding of Lensky’s character and predicament.

It is not until the last scene of the ballet that Bull and Scott as Tatiana and Onegin fully realise the dramatic potential of the story. Tatiana’s rejection of Onegin’s love is beautifully executed – she silently sobs in anger and loss, shaking with rage and grief for her youthful naivety. Finally we see why Scott was cast as Tatiana. She is amazingly effective here, almost making up for a rocky first half.

Apart from the dated costumes and design that, despite having been reconstructed, have certainly not been updated from Jürgen Rose’s original 1965 designs, the difficulty in connecting to this Onegin may possibly be one of relevance.

These characters, with the weight of their societal expectations, that quintessential Russian angst, and an almost tangible sense of entitlement that flows through aristocratic blood, are all somewhat out of place within the heady egalitarianism of Australian culture.  Do these dancers understand what motivates the characters when they are products of a culture that is so foreign to this one?  Do we, as the audience, find a man like Onegin relevant in this country of sunshine? I’m not so sure, and have become even less sure when some dancers fail to fully explore the nuances of their characters .

Perhaps this is simplifying or excusing performances that are not adequately or comprehensively coached. It is hard to brush off the lack of gravitas exhibited in this performance, or to forgive its failure to project an adequate range of emotionality.

Despite the lush, romantic Tchaikovsky score (arranged and orchestrated by Kurt–Heinz Stolze), Cranko’s sophisticated and textured choreography and some fine individual performances, this Onegin misses its opportunity to transport us to a different time and place. 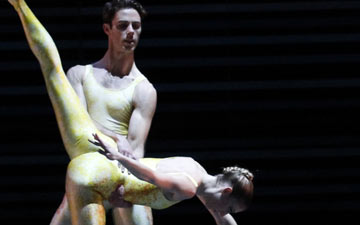