You are born, have fun times, sad times, weird times, and then you die. Pina Bausch has taken this, the stuff, dreams and insecurities of life, and made it into her own Tanztheater. For many she defined what modern Tanztheater is all about and for nearly 40 years, with her dancers/collaborators, built up a revered collection of work that only they perform. Tanztheater stretches out beyond the Cinderella position that dance often finds itself in and Arts Editors notably perk-up when Pina Bausch is in prospect. And the crossover audience of theatre and dance sells out major theatres too including practically all performances in this London season. Viktor is the first of the 10 World Cities pieces that Sadler’s Wells and the Barbican are putting on over a period of 5 weeks – a huge undertaking and a celebration of both the Olympics and Tanztheater Wuppertal’s continued existence and ability to re-mount work since Bausch’s death nearly 3 years ago.

The city inspiration for Viktor is Rome. From Sadler’s Wells’ site: “Living in each city for a period of time, her company would then return to Wuppertal to create a piece inspired by their visit, a choreographic travelogue deeply informed by its host location.” I have to say I’m not sure I felt deeply informed about Rome at all (and I have visited a few times), so much as about the generic foibles of western life, relationships and self-doubt. I’m sure Romans everywhere will find much subtlety in the playing out of their life but looked at through generic eyes it’s still an enthralling, if overlong, ride.

What’s so great about Bausch is the coupling of domestic normality – men and women dressing up and wanting to do a bit of social dancing, say, and a mad, surreal world of dreams and human angst with nude men, armless woman, grazing sheep, the domestic bliss of power-sawing wood (all live), the lady perpetually changing her dress and the emphasis on cigarettes and breasts – perhaps Rome is more into breasts than other cities? Scene after scene unfolds, some funny, some perplexing but after a while, despite the charmingly strange variety, that alone is not enough and at 3½ hours it’s all too much. And for somebody who loves dance the pickings are beyond thin.

But the 30-strong company, which has one of the widest ranges in dancer age I’ve seen, is sensational to watch – and brave too: they might be fit but these are characters with flesh and bulges like us – if perhaps a little less plentiful. Ultimately the things I remember most dear are the exhilaration of dancers in their flowing dresses swinging out towards the audience, deliriously happy as if children being pushed by proud parents at the playground and the 3 decrepit waitresses, smoking, bored by life, bored by each other and even more bored by a solitary customer wanting service. Oh and one of the miniature dogs mounting another during the auction – not planned, but oh so Bausch. For these cameos, and others, I’m glad I caught up with Viktor, but once is enough for a good while. 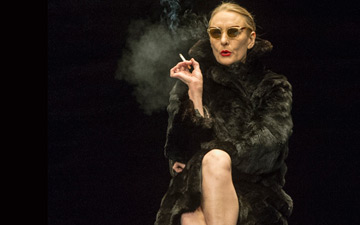 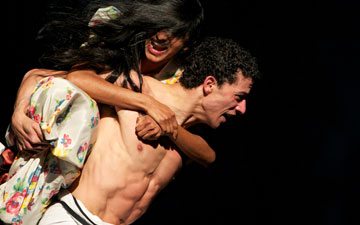