It’s ten years since Matthew Bourne’s production of Play Without Words premiered at the National Theatre as part of an experimental run of productions in the Lyttleton, reconfigured at the time to bring more of the audience closer to the action.  Given how popular it proved then, it’s perhaps a surprise that it hasn’t been staged in London since.  In this revival with a largely new cast it comes up fresh, pungent and lively: and it proves to be possibly Bourne’s most complete and satisfying achievement of what he sets out to do in terms of a dance and theatrical experience.

The work is loosely based on the film, The Servant. This may be the most British of Bourne’s works: it has a very specific setting in time and place. We are in fashionable Chelsea in early 1960s, where rich young Antony has just acquired a smart house. We are still in an age of deference, where rich men have servants and expect unquestioning obedience from their subordinates. The world is on the cusp of a great social change but Antony doesn’t know it. The work is all about power: the power that Antony and his chic fiancée, Glenda, assume they have by right which proves to be illusory, and about erotic power others have over them that brings about their downfall.

This is as much a theatrical production as a dance production:  it doesn’t have as much dancing as some other Bourne productions, but is packed with tightly choreographed movement which could only be accomplished by trained dancers. It lives up to its title. I recall in its initial run at the NT it was reviewed by drama critics as well as dance critics.

Bourne’s most striking idea is to triple cast the main roles so that at any moment there may be three versions of Anthony on stage each with their Glenda. There are also triple representative of Prentice, the servant and two versions of Sheila the housemaid. This sounds as if it should be horribly confusing but it isn’t: it enables Bourne rapidly to layer in multiple nuances of the relationships between the characters. You can see the same thought process unfolding with great clarity across the different performers.  It also carries the action along briskly: the work is less than two hours including the interval and yet has seemed to pack in so much incident without feeling rushed.

The music for the work is a cool jazz score played live by five musicians: it is steeped in the sound of the early sixties. Though it sounds strikingly authentic the score was specially commissioned from Terry Davis.

Bourne and his designer, Lez Brotherston, lovingly add in the place and period detail.  The backdrop incorporates the London streets complete with red London bus, red phone boxes and a black cab, and also the outlines of Centre Point and the Post Office Tower – so new and searingly modern at the time.

The clothes, the glasses, the hairdos are perfectly in period. There is even a scrap of The Avengers viewed on the (tiny !) period television, with the purring tones of Steed and Mrs Peel reminding us of the supressed sexual frissons of that particular era.

The revolving set is strikingly adaptable and can be a grand staircase in the Chelsa house one moment and a strip club in Soho the next.  It allows a cinematic fluidity in the changes of scene, helped by the lighting by Paule Constable.

In dance terms there are still some typically Bourne set pieces. We have a housewarming party where the guests get to do some groovy sixties dancing and the little dull girl in grey does an unexpectedly uninhibited number.  Another is the one where Antony is dressed ceremonially by one Prentice as another Anthony is simultaneously undressed. It is very funny but it also tells us just how enervated and spoilt Antony is, never doing anything for himself, and how fatally reliant he is on others.

In contrast to Antony his supposed friend Speight is a bundle of energy and danger, an Angry Young Man in a red check shirt. His roving eye falls on Glenda. Bourne’s trebling of parts helps us see the detail of a character’s reactions: though one Glenda might slap Speight in the face you can sense that this isn’t the only reaction and that there’s a dangerous attraction there.

Antony’s subsequent breakdown and his humiliation at the hands of Prentice feel like the only slightly rushed moments in an otherwise perfectly paced production. If I have any quibbles it is that this generation of Prentices don’t quite have the sinister power of some of the originals.

Bourne has always been keen to stress the show rather than the performer and this is a real ensemble work, with the sixteen dancers (only two of whom were in the original cast) working hard at multiple roles.  It is a fabulous evening, funny, sexy and as fast paced as a thriller. This is Bourne’s finest and most inventive work. 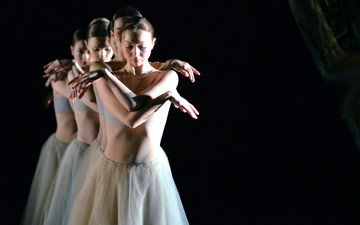